Budapest Airport welcomed Ryanair’s new route between Billund in Denmark and the Hungarian capital with a Lego cake in honour of the home of Legoland. Presenting the cake to the crew was the airport’s Head of Airline Development, Patrick Bohl. Bohl was then joined by the first passenger in cutting the ribbon for the new service. Cologne/Bonn in western Germany welcomed Ryanair to the airport. The cake baked to welcome the airline plays on the airline CEO Michael O’Leary’s statement that flight attendants should reduce their body weight in order to reduce the fleet’s fuel consumption. Posing with the cake were Cologne/Bonn Airport’s Marketing Manager Uli Stiller, Ryanair’s Sales & Marketing Manager for Germany, Henrike Schmidt, and the Ryanair crew. 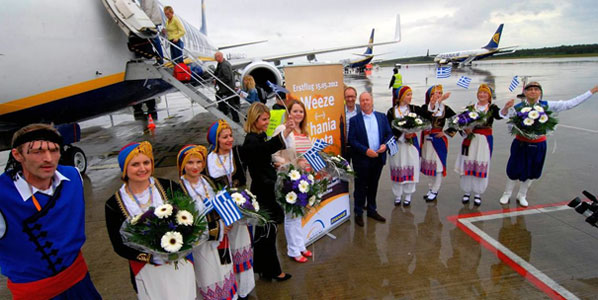 Celebrating Ryanair’s first flight from Weeze to Chania on the Greek island of Crete were the Greek dance group ‘Chara’ along with Ryanair’s Sales and Marketing team for Germany, executive Jana Skornicka and manager Henrike Schmidt, as well as Weeze Airport’s CEO Ludger van Bebber and chairman Herman Buurman.