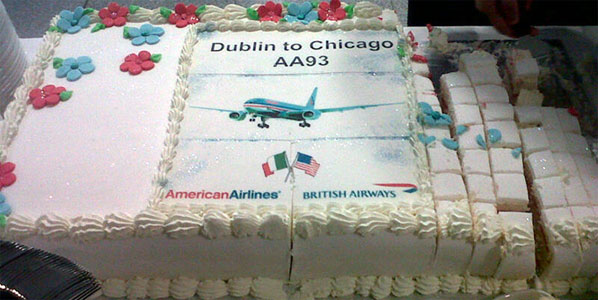 April 2012: American Airline’s returns to Dublin with its daily Chicago service. Our analysis of OAG schedule data for June 2011 versus June 2012 indicates American Airlines has cut its international seat capacity by around 6%.

As American Airlines, its shareholders, its unions and various other interested parties continue to ponder and plan the airline’s future anna.aero this week takes a look at trends in the airline’s international services. Analysis of changes in demand (as measured by RPMs – Revenue Passenger Miles) split between American Airlines’ three international market segments (Transatlantic, Latin America and Pacific) since January 2011 shows that the Pacific market has been the fastest-growing of the three, with average year-on-year monthly growth of almost 13%. 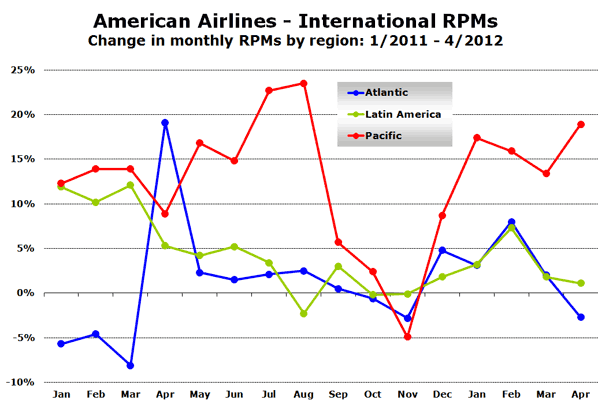 Without the boost in April 2011 resulting from the artificially low (ash cloud influenced) figure in April 2010, transatlantic traffic would barely have shown any average growth at all, while Latin America’s average growth for the last 16 months was just over 4%, though if only the last 12 months data are analysed this falls to 2.4%.

International capacity down 6% in June

According to our analysis of OAG schedule data for the first weeks of June 2011 and June 2012 American Airlines has cut its international seat capacity by around 6%. Among the top 15 country markets, weekly seat capacity has been increased in six of them, been cut back in seven country markets and has remained unchanged in two (Argentina and Japan). 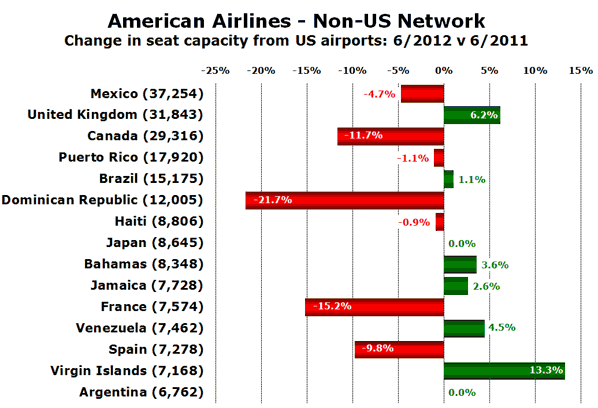 The Mexican market has seen an almost 5% fall in capacity primarily as a result of the downsizing of aircraft on some routes. The number of routes operated has remained almost unchanged (Chicago O’Hare to Los Cabos now appears to be a winter-only route rather than year-round) and the number of weekly flights is also almost unchanged.

The Dominican Republic has seen the biggest reduction in percentage terms followed by France (the airline’s Boston – Paris seasonal service starts later this year than it did in 2011) and Canada, while the biggest increases have been to the Virgin Islands and the United Kingdom. American Airlines has started very few new international routes during the last 12 months but it did launch flights between Miami and Barcelona in April 2012. However, this was basically re-allocating some capacity from the airline’s existing Miami – Madrid route and when combined with a reduction in flights between New York and Barcelona has resulted in a reduction of capacity to Spain of around 10%.

The almost 12% reduction in capacity to Canada is a combination of frequency and capacity cuts on maintained routes (notably from Chicago O’Hare) plus the withdrawal of three city-pairs; Boston – Toronto (replaced by Delta), Chicago O’Hare – Calgary (served by United and as from 14 May this year also by WestJet), and New York JFK – Halifax (still operated by Delta on a seasonal basis). The 6% growth in UK capacity is the result of operating five daily flights this June between New York JFK and London Heathrow compared with just four per day last June.