Colombia’s “New Airline” takes to the skies as VivaColombia Backed by the original founders of Europe’s largest low-cost carrier Ryanair, Irelandia has over the years become a serial developer of low-cost airlines around the world. With first experiences in Latin America stretching back to 2006, when Mexico’s VivaAerobus was founded, Irelandia now teamed up with other investors to duplicate the low-cost model in Colombia.

The country’s aviation market is largely dominated by the full-service Avianca, which holds more than 60% of domestic traffic. While the region’s large airline groups have made inroads in the country, Easyfly was until now Colombia’s only carrier to adopt the low-cost model.

Medellín becomes the operational base; five A320s expected by October 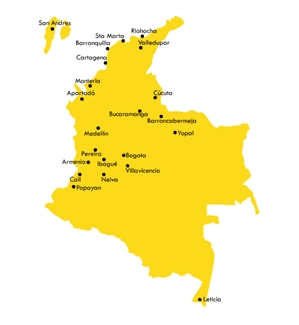 Although only given the final go-ahead from the Colombian regulator a day before its launch, VivaColombia has now been authorized by Aerocivil to operate on as many as 32 domestic routes. Initially, flights will mostly be offered on already busy routes, and the airline anticipates fierce price-based competition to the overall benefit of the market; in fact, incumbent airlines are reported to have lowered their fares prior to the launch.

VivaColombia commenced operations with three leased A320s in high-density 180-seat configuration; the fourth aircraft is expected to arrive in mid-June, and be followed by a fifth unit in early autumn. As the aircraft arrive, new destinations will be added to the network, including thinner routes to more remote locations, like Letitia in the Colombian Amazon, which are currently not served directly from Medellín. According to Jacobsen, VivaColombia “hopes to break even within the first year of operation, although it is very much down to the market reception.”