Of the 10 airlines serving Trondheim, half have launched operations at the Norwegian airport in the last two years. In rotation: Icelandair, Estonian Air, Flybe Nordic and Wizz Air.

Norway’s fourth-busiest airport serves the city of Trondheim on Norway’s west coast, which may be best known as a centre for the fishing and petroleum industries, but business traffic is far from the only reason why the airport recently has seen such fast growth. Leisure traffic is emerging in both directions, with Trondheim being a gateway to Norwegian nature, as well as Norwegians having a high disposable income and willingness to travel. 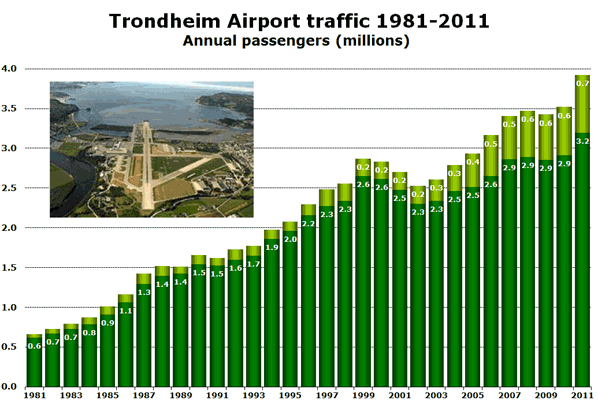 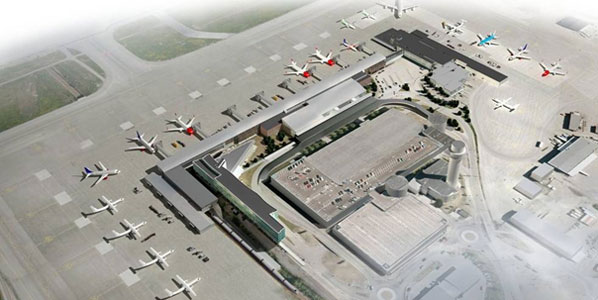 Trondheim Airport is currently undergoing expansion and modernisation works; a €75 million investment that will raise capacity to five million annual passengers upon completion next year. Last year, the airport reached 3.9 million passengers and traffic – especially international – continues to grow, not the least as the airport attracts new airlines.

Although Norwegian has grown to be a strong force in its home country, SAS is still the biggest airline in Trondheim with more than 44% of scheduled seat capacity. If including SAS’ regional subsidiary Widerøe, SAS Group’s share of frequencies at the airport is an entire 65%.

SAS’ only route from Trondheim to a destination outside of Scandinavia is currently Alicante; however, the Scandinavian flag carrier will also launch new routes to both Barcelona and Nice – each operating weekly – in July.

Several of the airlines serving Trondheim are new to the airport, as the airport operator Avinor has managed to attract five new carriers in the last two years; Icelandair, Estonian Air, Wizz Air, Flybe Nordic and Lufthansa. The table below details the new routes launched by these and other airlines in Trondheim during that period.

Of these routes, the only not to still operate is the Stockholm Arlanda service on now bankrupt Skyways, which only competed with SAS on the route from the Swedish capital for just over four months.

Notably, Flybe Nordic’s route to Trondheim was launched on the very day the airline commenced operations. Another noteworthy new route on locally based Norwegian is the service to Berlin, which the low-cost airline launched at the start of the summer scheduling season this year. In combination with Lufthansa’s Frankfurt service, this now makes Germany Trondheim’s second-biggest international country market outside of the Nordic region after the Netherlands. 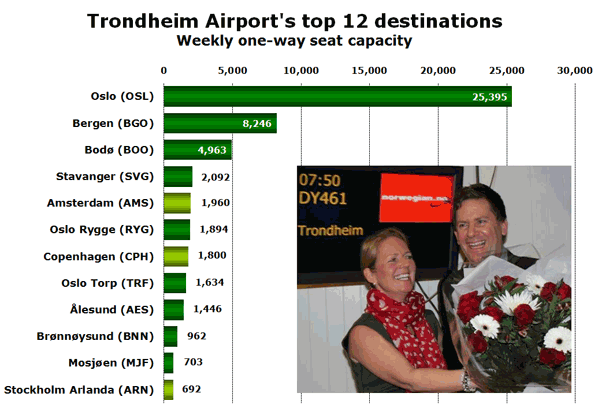 Capacity to the capital’s main airport makes up 45% of total scheduled seat capacity in Trondheim. Together with Oslo’s secondary airports Rygge and Torp, this increases to 51%. At 15%, Bergen ranks second.

Of the three international destinations making Trondheim’s top 12 list, Amsterdam Schiphol is notable for being outside of Scandinavia. KLM Cityhopper currently operates three times daily to Trondheim with E-190 and Fokker 70 aircraft.