Wizz Air still #1 LCC in most of its ‘home’ markets; fighting hard with Ryanair for leadership in Hungary and Poland 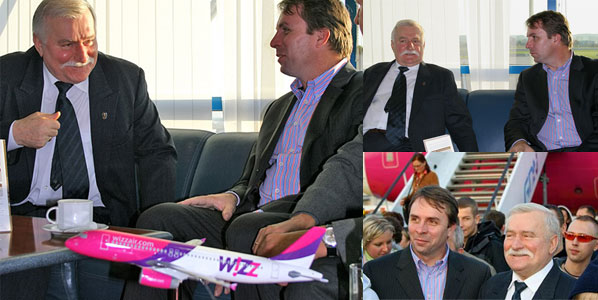 Lech Wałęsa, revolutionary, founding leader of the Solidarity trade union, former Polish President, the man who did more than most to bring down communism, meets Jozsef Varadi, the Hungarian, the capitalist CEO of Wizz Air, the tie-less man who brought low fares to Poland and much of Central/East Europe (and now charges €30 for each bag). Photo credit: Gdańsk Lech Wałęsa Airport

Budapest headquartered Wizz Air recently celebrated its eighth birthday and revealed that it had carried just over 12 million passengers in the last 12 months, at an average load factor of around 84%. According to the airline, its fleet will this summer consist of 40 180-seat A320s spread across 15 bases in eight Central European countries. anna.aero’s analysis of the airline’s route network and schedule for this summer reveals that Wizz Air is the biggest major LCC in six of the eight countries it has bases in, based on weekly departures. In Poland, the airline’s biggest market it faces tough competition from Ryanair, while in Lithuania, Ryanair is bigger thanks to its base in Kaunas. Ryanair’s recently opened Budapest base means it is now operating roughly the same number of flights from Hungary as Wizz Air. Only in the Czech Republic does easyJet come close to matching Wizz Air in terms of weekly flights. 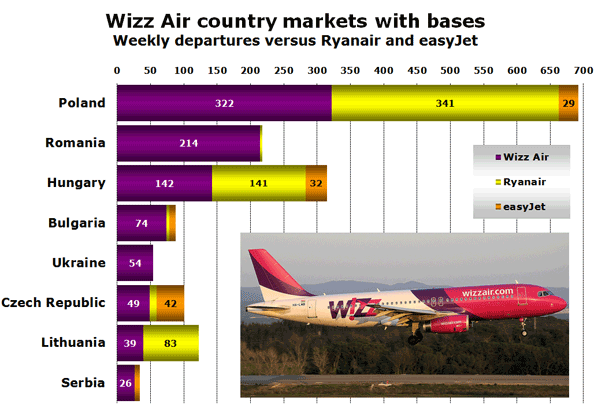 In a move that may challenge the Lithuanian dominance of Ryanair (which has a base in Kaunas), Wizz Air has just launched five new routes out of the capital Vilnius. The cake says “The Wizz Air flight is always fun” – and, while the competition with Ryanair will certainly be ‘interesting’, so far the Paris route is the only service to face direct competition with the Irish low-cost airline.

Examination of all the countries that Wizz Air flies to reveals that the UK in fact ranks second overall (221 weekly departures) and Italy is fourth (with 199 weekly departures), while Spain and Germany both see around 100 weekly departures of Wizz Air flights. In total the airline currently serves over 70 destinations in 25 countries across Western, Central and Eastern Europe and its network comprises over 220 routes with an average weekly frequency of just under four flights per week. With around 1800 departures per week this means that each of the airline’s 40 aircraft is averaging over six sectors (or three rotations) per day, highlighting the airline’s high aircraft utilisation, one of the key drivers in keeping its unit costs low.

A closer look at each of the 15 bases reveals trends for country markets served from these airports. The four major destination markets of the UK, Italy, Germany and Spain account for two-thirds of all weekly flights from the airline’s bases, but the exact proportion does vary significantly by base, from just 42% in Belgrade to 90% in Timisoara. 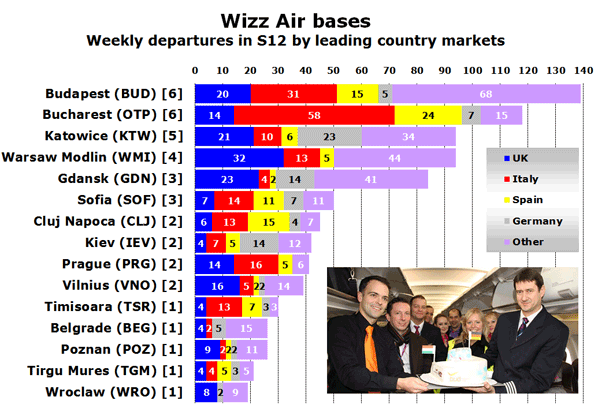 From Budapest, where the airline has in effect become the new national carrier since the demise of Malev, Wizz Air has a broader range of services and also operates several routes to other Central European destinations in Bulgaria, Poland and Romania.

The airline’s Polish bases have quite a high concentration of flights to Scandinavia, in particular Norway and Sweden. Wizz Air does not as yet operate any flights to Denmark, and also operates only two routes to Finland (both to Turku).