The booming Brazilian market suddenly saw a fall in passenger traffic in April and now Azul and Trip have announced their intention to merge, which will decrease the number of airlines dominating the Brazilian domestic market. However, there appears to be space for regional niche carriers like Passaredo, which launched a new route between Cascavel and Curitiba at the end of March.

The rapid growth in Brazilian air traffic that saw passenger number grow by 13% in 2009, 21% in 2010 and 16% in 2011 appears to be running out of steam in 2012. Although traffic was up more than 10% in January and February, in March growth was just 5%, while in April passenger numbers through Infraero’s airports fell by 0.3%. This is the first time since May 2009 that passenger numbers have not grown year-on-year. 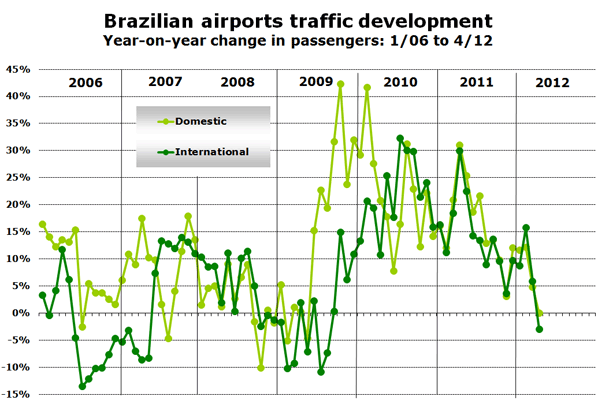 Having finally broken through the 10% market share milestone in February, third ranked Azul recently announced that it would merge with local rival Trip. Since last December, the two carriers combined have had just over 14% of the Brazilian domestic market. 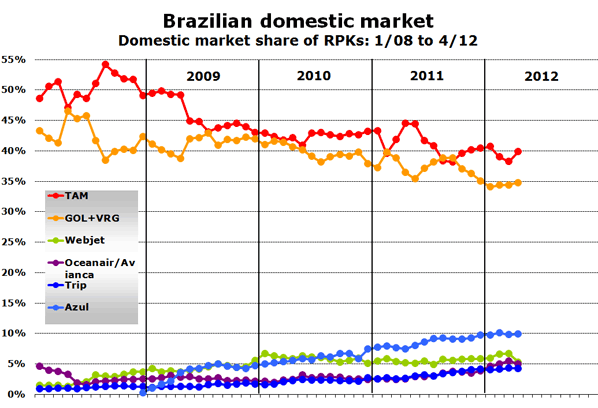 According to ANAC data for the first four months of 2012, domestic capacity (ASKs) has grown by 10.3% compared with the same period last year. Azul has grown its ASKs by just over 40%, while Trip has grown by just over 65%. The two dominant carriers, GOL and TAM, both saw capacity grow by around 3%, while both saw a small drop in domestic demand (RPKs); TAM of just under 1%, GOL by just over 3%.

It is worth noting that just four years ago, Gol/Varig and TAM had a combined domestic market share of almost 95%. This has since fallen to just under 75%. Or looked at another way, other carriers have grown their market share more than fivefold from under 5% to over 25% in just four years, suggesting that Brazil’s domestic market is becoming an ever more vibrant scene.