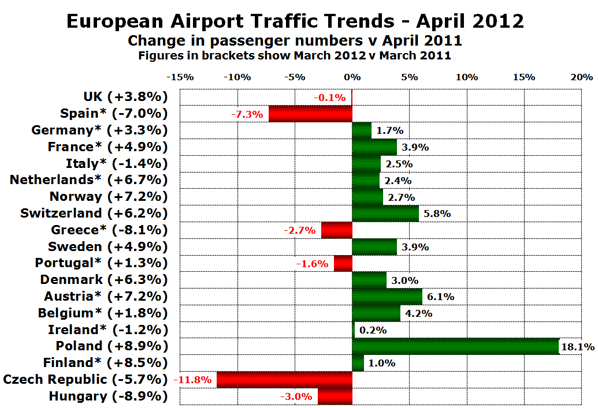 As Europe’s politicians continue to struggle with the debt crises in various EU countries, anna.aero has decided to look at how much of a barometer airline passenger trends in these countries are, in predicting economic development. The following graph, which uses our extensive database of traffic and trend data for March and April for over 300 airports across Europe, ranks European countries in terms of total airport passenger numbers in 2011 and reveals graphically by how much airport traffic grew in April 2012 (versus 2011), and also shows how this compares with the same analysis in March 2012.

For the purposes of this analysis, Turkey and Russia (which ranked sixth and seventh respectively in 2011) have been excluded as being on the perimeter of Europe and less affected by the European economic issues. Both of these countries in fact reported healthy double-digit growth in April. Of the 19 countries analysed, 11 are members of the Eurozone, while eight are not.

According to AENA, Spanish airports reported a 7.3% drop in passenger numbers in April not helped by regular, disruptive strikes by the country’s second-busiest airline, Iberia. The figure is similar to that reported in March. April can be considered the start of the summer season when leisure traffic in many markets is stimulated, especially thanks to the Easter break falling in that month. Two other popular leisure destinations for northern Europeans, Greece and Portugal, also reported traffic decline in April. These are both countries at the heart of the Eurozone crisis.

Among Europe’s big five leading air transport country markets, French airports reported the highest growth in both March (+4.9%) and April (+3.9%). French data is based on anna.aero’s analysis of traffic data from 21 of France’s leading airports including all bar one that handled more than 500,000 passengers last year. Impressive April growth at regional airports around France, helped by Air France’s new regional base development, new French bases for easyJet, and the launch of Volotea, helped compensate for a lacklustre performance at France’s two busiest airports in Paris (CDG and Orly) who between them reported growth of just 1.2%.

Central Europe’s three leading aviation markets reported mixed fortunes in April. After 9% growth in March, Polish airports reported a stunning 18% year-on-year growth in April. A combination of Ryanair’s new Wroclaw base, and the launch of multiple new domestic services by OLT Express has given Polish aviation a huge capacity boost. In Hungary, Budapest has recovered impressively quickly from the demise of Malev, the national flag-carrier, back in January and although traffic was down 9% in March the difference was just 3% in April, thanks to a range of carriers stepping in to serve Malev’s former routes, and the decision by Ryanair to launch a major base at the airport with some 30 new routes. Meanwhile, despite still having its flag-carrier (CSA Czech Airlines), Prague Airport has seen a 6% traffic fall in March widen to an almost 12% drop in passenger numbers in April. 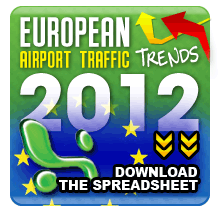 None of these three countries are members of the Eurozone, so it is hard to tell how much their traffic development is related to problems among the Eurozone nations. Although fuel prices have fallen slightly in recent weeks, they are still at almost record-high levels and it seems unlikely that any of the major European markets will see much of an upturn in air travel in 2012. However, business has not ground to a halt across Europe and most people still seem intent on taking their holiday(s) this year. Given some of the exaggerated threats of economic meltdown that lie ahead, it is heartening to see that air travel (which in the past has often been a good indicator of economic activity) was growing in 13 of the 19 countries analysed, in both March and April. To see what happened in May across Europe’s airports, please check our European Airport Traffic Trends database that is updated on a weekly basis.