Malaysian May in Toulouse: While Fabrice Brégier, CEO Airbus, and MAS Group’s CEO Ahmad Jauhari Yahya celebrated the airline’s first A380, AirAsia’s CEO Tony Fernandes and his team baptised the airline’s 100th A320 after the previous CEO of EADS, Louis Gallois.

Boeing remains in the lead of the 2012 delivery race and currently outperforms its European rival Airbus by nine aircraft in May, up from five in April. While Boeing reduced the number of single-aisle and widebodies delivered by each two units compared with the previous month, the 34 narrowbodies delivered by Airbus in May provided for a significant year-on-year fall of six units.

Following the busy months of March and April, when 100 and 103 aircraft were delivered respectively; in May, the world’s airlines received a total of 94 units from both manufacturers. Despite this, an upward trend persists, as five more airframes were delivered in May 2012 than in the corresponding month of 2011. 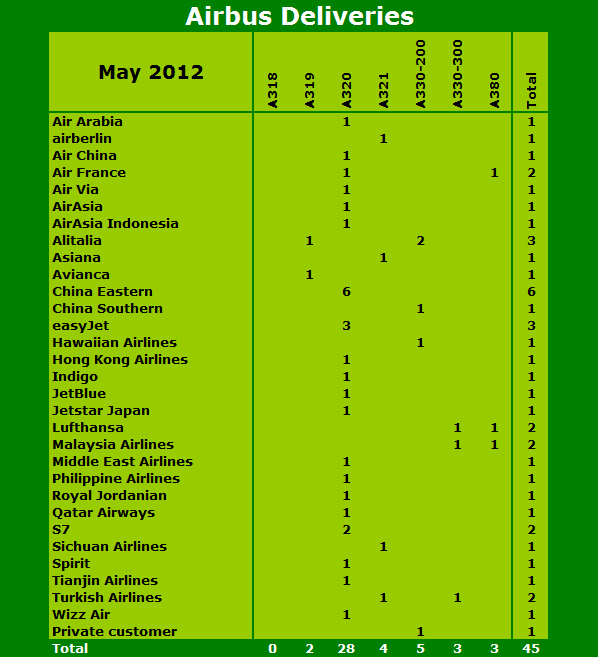 Airbus closed the month with a total of 45 delivered units, which is seven aircraft less than in April 2012 – all narrowbodies – and five units less than in May last year.

34 narrowbodies were delivered last month, and China Eastern was the largest recipient. Directly or via leasing companies, the company took delivery of a total of six A320s. Notably, Air Asia added the 100th A320 to its inventory, naming it in tribute to Louis Gallois, the former CEO of Airbus and its parent company EADS. This year to date, Airbus delivered 178 single-aisle airframes, five more than its American rival.

Among the 11 widebody deliveries made in May were three A380s. Notably, Malaysia Airlines took delivery of the 75th aircraft of the type, becoming the eighth worldwide operator of the superjumbo. Following Singapore Airlines, Qantas, Korean Air and China Southern, Malaysia Airlines is now the fifth operator of the type in the Asia-Pacific region. Air France and Lufthansa received one each of the two remaining A380s, bringing their respective fleets of the aircraft type to seven and nine. 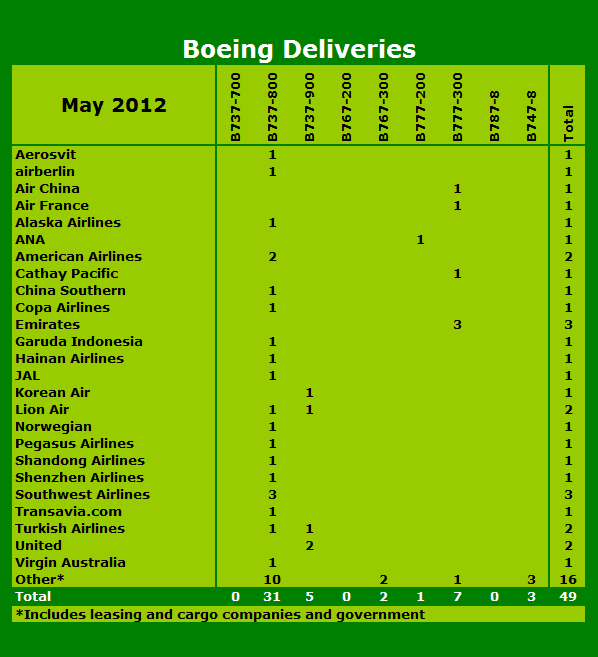 Boeing closed May with a total of 49 units delivered, just two aircraft less than in April. Airlines received a total of 36 narrowbodies from the American air framer. The single biggest recipient of single-aisle aircraft last month, Southwest, took delivery of three 737-800s, bringing this year’s total received by the airline to 8 units. Boeing is yet to deliver 65 737-800s to the American carrier. Only two other carriers, both in the US, took delivery of more than one narrowbody from Boeing last month; American Airlines and United received two 737-800s and 737-900s respectively.

The same number of widebody units was delivered in May as in April, and Boeing more than doubled its year on year performance. Notably, Emirates took delivery of three 777-300ERs, bringing the total operated by the airline to 39. Following the airline’s 2006 order, Boeing is yet to deliver 81 units of the type to the Gulf carrier. No other airline received more than one widebody airframe last month. Notably, there were no 787 deliveries in May.

In May, airberlin received its first Boeing aircraft painted in the oneworld livery. The 737-800, which now is based in Düsseldorf, can be seen built and painted in the airline’s impressive YouTube video.