Delta’s JFK base gets nine new routes, but overall flights are reduced as airline expands at LaGuardia

Gail Grimmett, Delta’s SVP – New York, talks here about 700 new jobs created by a $1.4bn investment in infrastructure and the 100 new flights to 30 cities. Despite the nine new routes started at JFK in the past week the number of Delta JFK departures is actually down 6% this July after it dropped international services to Berlin, Budapest and Manchester, and a number of domestic links.

In 2011 Delta ranked second among carriers serving the three main New York airports (JFK, LaGuardia and Newark) with a total of 20.37 million passengers, beaten only by Continental with 23.31 million thanks to its base at Newark. Counting only domestic passengers Delta (16.05 million) just beat Continental (15.72 million). Delta’s traffic was split across all three airports with 11.43 million passengers at JFK, 7.15 million at LaGuardia and 1.64 million at Newark. A slot swop with US Airways means that Delta has significantly expanded its presence at LaGuardia at the start of the summer season (with 12 more new routes starting on 11 July) but last week also saw the airline launch nine new routes from its JFK base.

JFK flights down 6% this summer

However, despite these new services the number of weekly departures operated by Delta at JFK this July is actually down 6% as the airline has dropped several routes (international services to Berlin, Budapest and Manchester, as well as domestic links to Albany, Burlington, Houston and Lewisburg) and has reduced frequency on a number of other domestic routes such as Buffalo, Charlotte, Cleveland, Miami, Pittsburgh, Richmond and Washington Reagan. 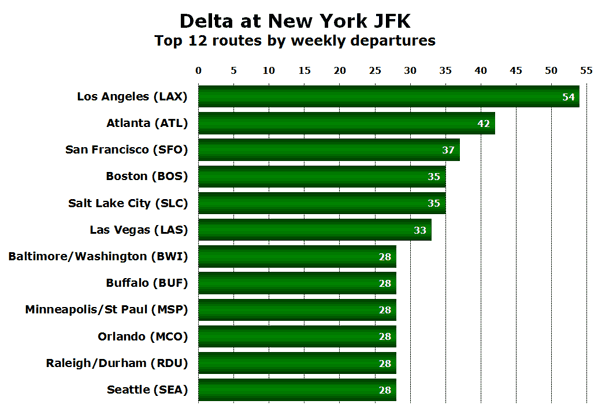 Analysis of which of Delta’s routes from JFK offers the most capacity as measured by ASMs (Available Seat Miles) still sees Los Angeles top the list, but now seven of the top 12 routes are on long-haul international routes (shown in light green), four to Europe, one to Asia, one to the Middle East and one to South America. 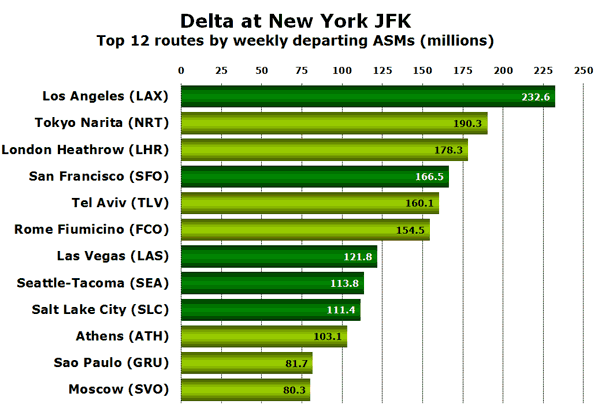