While Iceland’s biggest claim to aviation fame in recent years might be the volcanic eruption of Eyjafjallajökull, that resulted in the complete cessation of commercial flying across much of Europe for several days in April 2010, this high-profile, global event may in fact have helped boost tourism to the country. Passenger numbers at the country’s main international airport at Keflavik (which serves the capital Reykjavik) were up almost 18% in 2011 to just over 2.1 million, almost surpassing the previous record of just under 2.2 million in 2007, just prior to the country’s banking crisis in 2008. 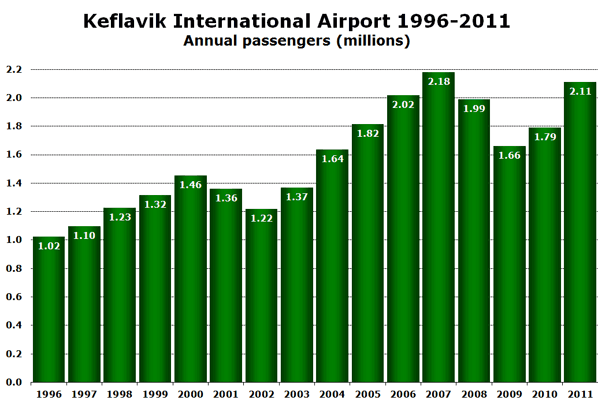 Air travel at Keflavik is dominated by the national airline Icelandair which focuses not only on flights to and from Europe, and to and from North America, but also as an alternative for traveller wishing to get between Europe and North America. With its famously long summer days (and equally famous long winter nights) tourism is extremely seasonal as can be seen from the airport’s monthly traffic figures. 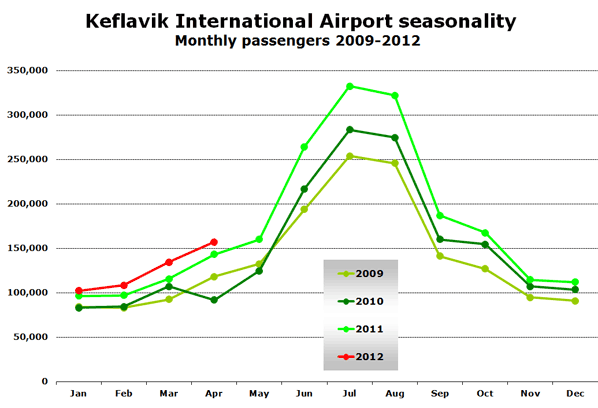 Passenger figures in the first four months of 2012 are up consistently versus 2011 suggesting a record year ahead, helped by Icelandair’s recent addition of Denver to its network, plus the emergence of a second locally-based low-cost carrier WOW air, which launched flights at the end of May.

With a dispersed population and just a single main road around the island, domestic air travel plays a significant role in the country. For much of the last decade the country’s regional airports have handled between 700,000 and 900,000 passengers annually. The busiest of these airports is the downtown Reykjavik Airport, located just a few minutes drive from the centre of Reykjavik. From here Air Iceland (a subsidiary of Icelandair) operates a fleet of Fokker 50s on several domestic routes, plus several destinations in Greenland.

In 2011 Reykjavik Airport (RKV) handled 384,232 passengers, while Akureyri (AEY) in the north of the country handled 205,822, and Egilsstadir (EGS) in the east of the country saw just over 100,000 passengers pass through its doors last year. Air Iceland operates between six and 10 daily flights between Reykjavik and Akureyri, and between three and five daily flights to Egilstaddir. Last week saw Icelandair begin four times weekly flights between Akureyri and Keflavik airport, making international connections a lot easier. Previously passengers had to make a 50 kilometre journey between Keflavik and Reykjavik to connect from international flights to domestic flights.

Iceland has had its own low-cost carrier, Iceland Express, since 2003. The airline which has consistently used aircraft provided by other companies operates to 16 European destinations non-stop during the peak summer season (June to August) having experimented in 2010 and 2011 with flights to North America (Boston, Newark, Winnipeg) as well. New destinations for this summer are Cologne/Bonn, Prague and Vilnius.

WOW air is a new rival which plans to serve 13 destinations this summer with two leased A320s. The two airlines will compete head-to-head on routes to Alicante, Basel, Berlin, Cologne/Bonn, Copenhagen, London, Paris and Warsaw. Whether the booming tourism market is big enough to profitably sustain both carriers remains to be seen.

While Keflavik airport is dominated by local carriers, airlines from other countries do serve Iceland. The German market is well served by airberlin (five routes), germanwings (two routes) and Lufthansa (three routes), while Norwegian and SAS help add competition on routes to Scandinavia. Austrian and Niki both serve Vienna while Delta is the only US carrier at the airport with five weekly flights to New York JFK. easyJet recently launched three-weekly flights from London Luton. Back in 2000 and 2001 Go (which easyJet acquired in 2002) was the first LCC to serve Iceland with seasonal flights from London Stansted.