Scoot launches with flights from Singapore to Sydney; Gold Coast, Bangkok and Tianjin starting by end of August 12 June 2012: Just launched!!! Scoot CEO Campbell Wilson (centre, definitely the low cost airline boss) hugs Queensland Minister for Tourism, Jann Stuckey on arrival at Goldcoast Airport yesterday. A lot has been written about this new airline so we’ve concentrated on looking at the fare structure on the launch route resulting in our interesting graph below…although we can't explain the pricing peaks at the time they occur. Photos: James Morgan at Gold Coast Airport.

The latest airline to venture into the still evolving long-haul, low-cost market is Singapore Airlines, whose fully owned subsidiary Scoot launched its first flight from Singapore to Sydney on 4 June with 777-200s configured with 32 seats in ScootBiz and 370 seats in economy. The airline is launching with two aircraft but will have four aircraft by the end of August (all provided by Singapore Airlines) when it will be operating four routes from Singapore; two to Australia and one each to China and Thailand. The decision to serve Bangkok, which is a highly competitive short-haul route, appears to be a way of improving aircraft utilisation when it would otherwise be on the ground for several hours.

The Sydney route is already served four times daily by Singapore Airlines, twice daily by Qantas and daily by British Airways, and according to Australian government statistics in 2011 the route was travelled by some 1.1 million passengers, up 4% on the previous year.

Scoot offers four different fare options on flights which are fairly self-explanatory; Fly, FlyBag, FlyBagEat and ScootBiz. The airline’s website shows the “Fly” fare which does not include additional taxes and fees. For the daily flights to and from Sydney anna.aero has collected the lowest advertised one-way fare until the end of September. 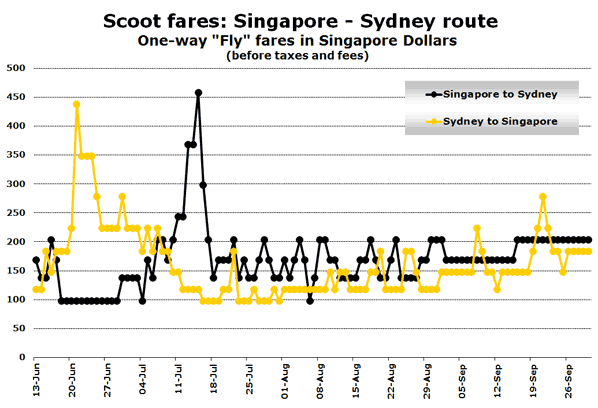 The airline’s revenue management system clearly has many different fare levels based on expected demand and the number of bookings already made. Two significant fare spikes can already be seen. For travel from Singapore to Sydney fares are significantly higher in the period 13-15 July while Sydney to Singapore fares spike between 21st and 25th June.

Passengers on the seven hour plus flight who would like to take hold luggage (weighing up to 15kg) are charged an additional S$28 (US$20) on each flight, while a meal will cost an additional S$17 (US$12). In other words a return flight to Sydney for passengers wanting to take a suitcase and wanting to eat will pay an additional S$90 (US$70) on a return flight. The traditional seat-back entertainment systems have been removed (saving considerably on weight) and been replaced by pre-loaded iPads which can be rented for a fee (S$22/US$15).

Using the fare data collected an example of the cheapest available return fare to Sydney would require outbound travel on Wednesday 4 July with return on Monday 16 July. The basic return fare would then be S$196 (US$150). Add in the above taxes and fees and the return flight is now S$347 (US$270). Add in a meal and a suitcase and the total comes to S$437 (US$560).

Next stop Japan and Taiwan?

At the airline’s launch CEO Campbell Wilson revealed that the airline’s next new routes would be Tokyo and Taipei, with the Japanese capital being served daily via Taiwan. A start date has not yet been confirmed. The airline has indicated that it is not currently considering markets in Europe due to the economic uncertainty, or the US, but that China is likely to be a key market.