WOW! On June 4 WOW arrived from Reykjavik ,  while in April  Ural Airlines’ new route from Moscow Domodedovo was welcomed with this spectacular cake featuring the cathedrals of Cologne and St Basil’s Moscow. The airport's home-based airline, germanwings, will serve 67 destinations this summer, a net gain of six destinations.

Cologne/Bonn Airport has welcomed an impressive six new airlines to the airport already this summer. The most significant of these is undoubtedly Ryanair which has not previously served the airport but has a major base at Frankfurt Hahn, which is some 100 kilometres to the south of Cologne/Bonn Airport. Ryanair has so far launched just two routes (to Girona and Palma de Mallorca on 15 May) so it will be interesting to see what happens next. Another of Europe’s biggest LCCs, Norwegian, has also launched its first flights to the airport from Oslo, raising the possibility of further services from its other bases in Copenhagen and Stockholm. The emergence of German LCCs back in 2002 has helped transform Cologne/Bonn’s passenger numbers which almost doubled from around five million to the current level of around 10 million per annum. 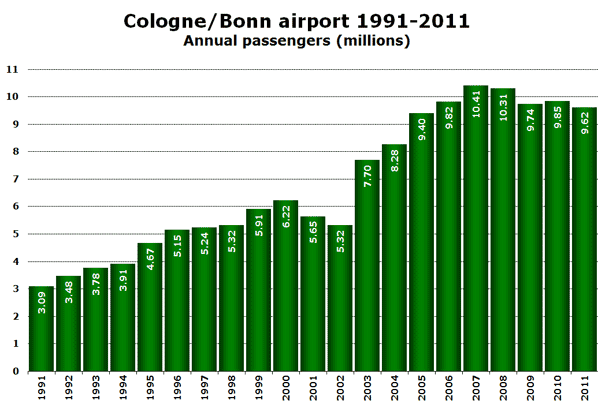 Apart from Norwegian and Ryanair, the other new carriers this summer have been SkyWork Airlines (serving Bern in Switzerland), Ural Airlines (serving Moscow Domodedovo), and two Icelandic LCCs, Iceland Express and WOW air (both serving Reykjavik/Keflavik since 5 June). The airport’s leading airline germanwings (Lufthansa’s in-house LCC) will this summer serve 67 destinations non-stop, a net gain of six destinations since last summer. A total of 10 destinations are new for this summer (Casablanca, Catania, Jerez, London Heathrow (replacing Lufthansa), Nador, Naples, Pristina, Rijeka, Tangiers and Tunis), but the airline has also dropped four routes (Belgrade, Copenhagen, Marseille, Sofia) while Bucharest services have, by necessity, been moved from Baneasa airport to Otopeni. 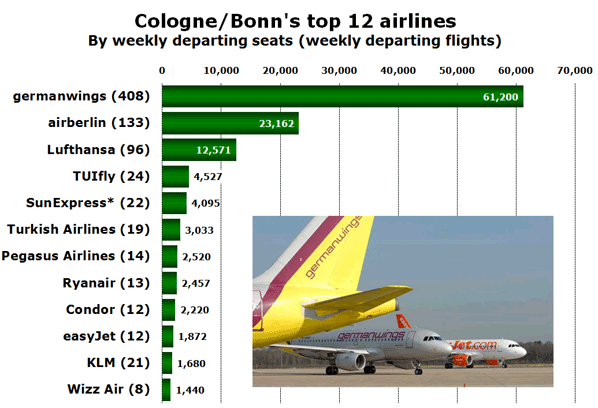 Second ranked airberlin has reduced its presence at the airport in recent years as it focuses on its main hubs elsewhere. Since last summer the airline has dropped its routes to Algiers, Casablanca, Hamburg (last flight operates on 24 June), Nador, Tangiers, Tunis and Valencia. Four of these routes have been picked-up by germanwings, Hamburg is still served by Lufthansa, but Valencia currently remains unserved.

Analysis of seat capacity during a peak weak in August reveals that domestic routes still have a 30% share of the market with Spain the leading international market. Since our last analysis of Cologne/Bonn airport, Turkey has overtaken Italy as the second biggest international country market, while the UK has swapped places with Austria to move up to fourth among non-domestic markets. 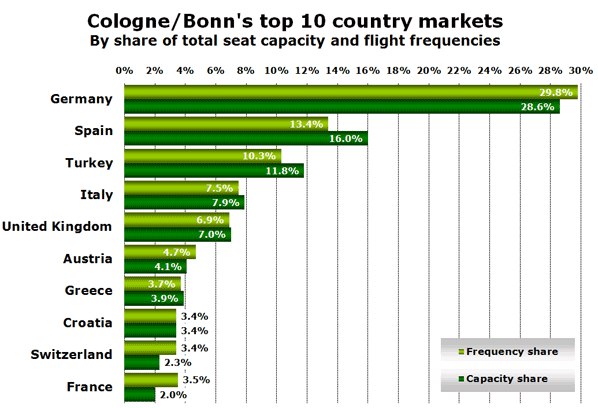