The Ryanair offer for Aer Lingus – how do the two airlines’ networks at Dublin compare? 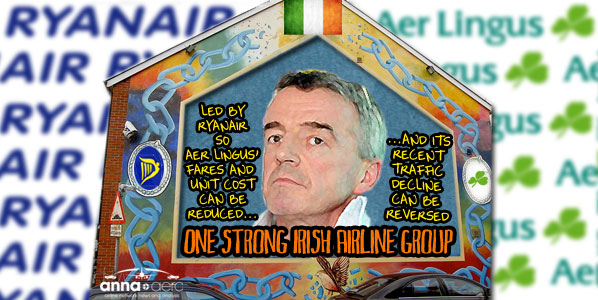 A radical, divisive figure, hated by the Irish political establishment, Micheal O'Leary's strong desire to control Aer Lingus is soberly argued in the Ryanair statement in which it offers to pay around 40% above traded share prices. The government is committed to sell its 25% to reduce the deficit, so the only third way would be the to sell to a non-Irish higher bidder, potentially Etihad.

Ryanair’s cash offer to purchase Aer Lingus appears to indicate it would keep it as a separate entity and: “will be put on a growth trajectory which will allow Aer Lingus to provide more competition and consumer choice at a number of Europe’s primary airports where currently Aer Lingus flies but where Ryanair does not wish to operate.” anna.aero thought it might be useful to examine this claim.

Of the 30 destinations where Aer Lingus does not compete with Ryanair, either directly or indirectly, it is worth noting that there are seven airports served by Ryanair from airports other than Dublin.

If Ryanair’s bid is successful, the following network-related questions would arise: