Ukraine’s airports and airlines set for record thanks to Euro 2012; Kiev Borispol Airport grew by 20% in 2011! 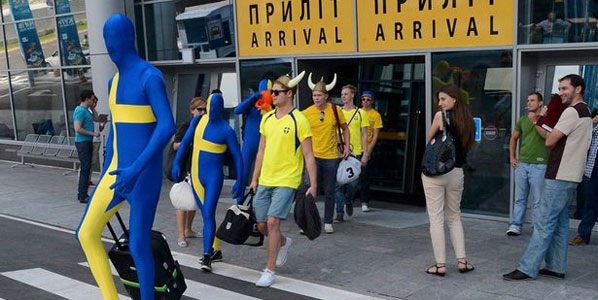 Swedish fans try hard to sensitively blend in as they arrive at Kiev’s low-cost Zhulyany airport. While most have probably gone home after Sweden’s exit from the championship, there’s big hopes that the investments, particularly in airports, will see lots of tourists return as a result of the 50 hours of global prime time TV coverage.

As co-hosts (with Poland) of the on-going Euro 2012 football tournament, Ukraine has received a lot of (more positive) media attention in the last few weeks which it will be hoping results in increased tourism in the future. The country’s airports saw passenger numbers grow an estimated 21% in 2011 to almost 12 million, almost two million more than the previous record of around 10 million in 2008. Two-thirds of this traffic passed through the country’s main international gateway, Kiev Borispol Airport, which handled eight million passengers for the first time, having never previously handled more than seven million. 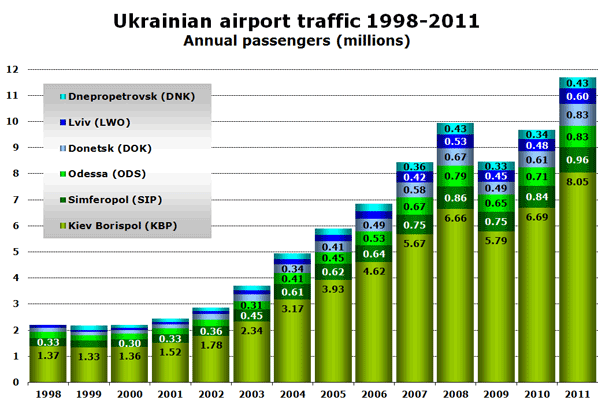 So far in the first four months of 2012, Kiev’s main airport has reported cumulative traffic growth of 11.5%, suggesting that it may handle nine million passengers this year. At present, it is the only Ukrainian airport for which anna.aero has passenger data in 2012. 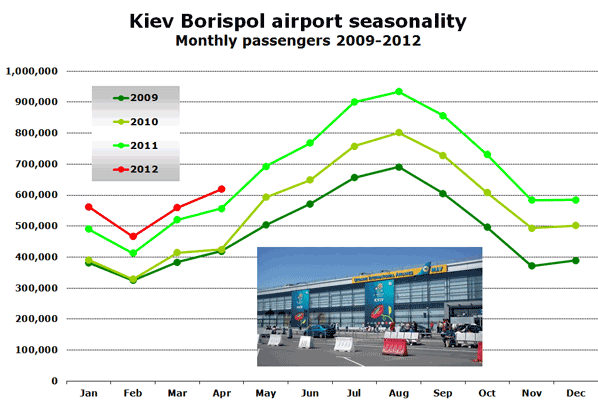 The airport’s seasonality profile is consistent with that of many other major European airports with a summer peak in August, and demand lowest during the winter months. Since 1998, Kiev Borispol has consistently accounted for between 60% and 70% of all Ukrainian airport traffic.

By virtue of recently launching three daily flights between Kiev and Simferopol, newcomer Air Onix is now the third biggest carrier in the domestic market followed by Wizz Air, which operates a single route between Kiev Zhulyany airport and Simferopol on a daily basis.

Based on current schedule data, Aerosvit is more than twice as big as Ukraine International in terms of international seat capacity. This summer, Aerosvit will offer a total of 83 international routes of which 50 will be from Kiev Borispol Airport.

A total of 52 airlines operate international scheduled services to one or more airports in Ukraine, including leading western European airlines such as Air France, Alitalia, Austrian Airlines, British Airways, KLM and Lufthansa, central European airlines including airBaltic, Czech Airlines, LOT Polish Airlines, and leading Middle East airlines including Air Arabia, El Al, flydubai and Royal Jordanian. However, no Asian or US carriers are present, and neither are Emirates, Etihad or Qatar Airways.

At least 14 airlines have started new Ukraine routes in 2012

Since the beginning of 2012, the following carriers have started international services to/from various airports in Ukraine:

Aerosvit and Ukraine International Airlines are both members of the Association of European Airlines (AEA). According to AEA statistics, Aerosvit’s passenger numbers increased by 66% in 2011 to 2.83 million (while load factor improved by two percentage points to 72%), while Ukraine International Airlines saw its passenger numbers rise by 54% to 1.45 million (and load factor improved by nine percentage points to 67%). Unfortunately, AEA no longer publishes monthly traffic data for its member airlines.