Why is easyJet closing its Madrid base? 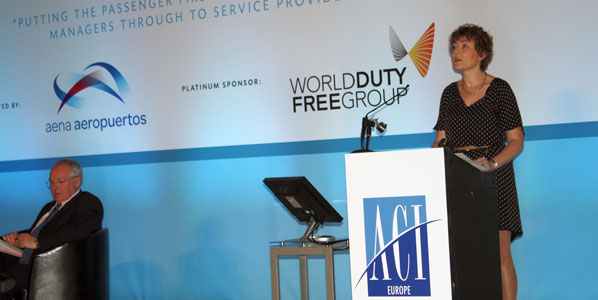 Madrid, June 22 (today): Catherine Lynn, Group Commercial Director, easyJet, addresses the 22nd ACI EUROPE Annual Congress & Exhibition in Madrid. anna.aero estimates that up to 12 routes could be lost by the closure of the Madrid base.

The announcement on 20 June that easyJet plans to close its Madrid base (but still serve the airport from other bases) got anna.aero curious to see how the airline’s operations at Madrid have evolved, and what competition it actually faces on its network. easyJet first began serving Madrid in September 1998 from London Luton, followed by Liverpool in September 1999, and London Gatwick in September 2002. The airport became a designated base in February 2007 and the number of destinations served rose rapidly. 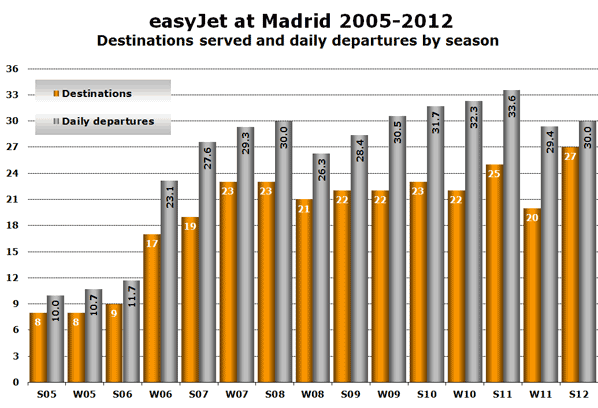 Although easyJet will be serving a record 27 destinations this summer, the average number of daily departures at the airport is still roughly the same as in the summer of 2008. A total of 38 destinations have been served at one time or other. Destinations tried but then abandoned include domestic routes to Asturias, Fuerteventura, Lanzarote and Palma de Mallorca, and international services to Bucharest, Casablanca, Marrakech, Sofia and Tangier. Paris services have switched from Orly to CDG, while Rome services have moved from Ciampino to Fiumicino.

easyJet is fourth biggest at Madrid

Analysis of Madrid’s passenger numbers by airline reveals that easyJet’s share of the market has grown from 2% in 2005 to almost 7% in 2011, when the airline carried 3.3 million passengers at the airport. Last year, it overtook Spanair (before its bankruptcy) to become Madrid’s fourth busiest airline, behind Iberia, Ryanair (which opened a base at the airport in November 2006) and Air Europa. 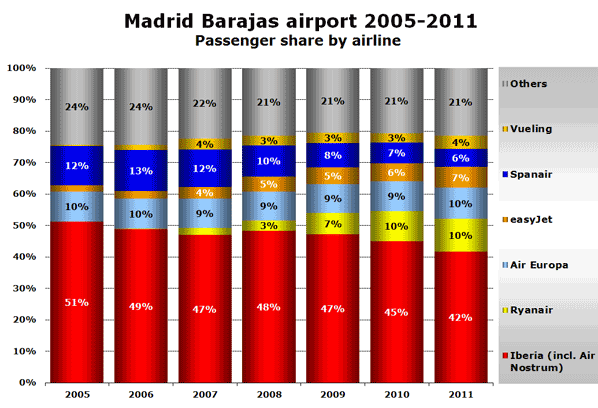 No competition on just four of 27 routes this summer

Analysis of schedule data for the peak summer month of August reveals that of easyJet’s 27 routes, just four (Basel, Bristol, Liverpool, London Luton) are not operated by any other airline. Of the other 23 routes, easyJet goes head-to-head with four airlines on two routes (Mahon and Ibiza), faces three competitors on a further five routes, two competitors on four routes, and a single competitor on the other 12 routes.

This list only looks at direct competition, with the exception of Berlin which will become a single airport in March 2013. Ryanair in particular offers further indirect competition on routes to London, Milan, Paris and Rome. easyJet has indicated that many of the routes to other easyJet bases are likely to remain, but clearly those routes that are not to easyJet bases are almost certain to cease. If this is the case, there are 12 such non-base routes in this table that could face closure. 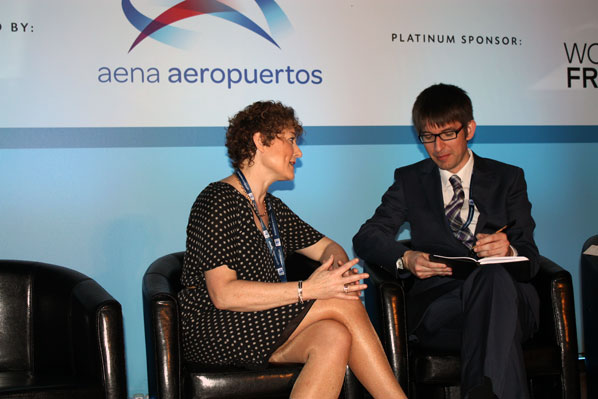 Catherine Lynn, Group Commercial Director, easyJet, this morning told anna.aero's Ross Falconer in Madrid how the announced capacity reduction in the Spanish capital is still only a proposal – and what she thinks about Ryanair's bid to take over Aer Lingus.

anna.aero’s Ross Falconer sat down with Catherine Lynn, Group Commercial Director, easyJet, this morning ahead of her address at the 22nd ACI EUROPE General Assembly in Madrid to learn more.

anna.aero: The Madrid base closure statement says some of the reasons for withdrawal are over-capacity. Surely this level of competition should be easyJet’s forte – you are much stronger on many levels (financially, Europe-wide brand strength…) and have a much lower cost base than Iberia, Air Europa etc. How come you and not the others are downsizing?

Lynn: “It is only a proposal to downsize in Madrid at this stage – it is being discussed and a final decision has not been made yet. Our job is to make sure that we allocate our aircraft assets efficiently. The challenges in Madrid are the doubling of airport charges, the current economic situation and the oversupply of airline seats in the market. Therefore, we are not in a position to deliver a return for our shareholders. We will get a better return for our shareholders by deploying those aircraft at other airports.”

anna.aero: The statement says airport charges have doubled in MAD – is this because of real increases or as a result of the scheduled ending of incentive packages?

Lynn: “Prices have doubled at Madrid in the last two years – these are real increases. They have also said that RPI will be +5% going forward. They will say that this is competitive with London Heathrow, but, of course, Madrid is not Heathrow.”

anna.aero: You will pull 8 aircraft out of MAD – that’s a lot of planes – where will they go? Will you have to park planes this winter?

Lynn: “We are still committed to the Spanish market and are continuing to grow. This will still include a sizeable presence in Madrid – the proposal is only to downsize by 20% at Madrid. We will carry 12 million passengers to and from Spain next year.”

anna.aero: Do you think that there are sound anti-competitive reasons against the proposed Ryanair takeover of Aer Lingus?

Lynn: “Yes! There is something like a 75% overlap on Dublin routes.”