Mexico’s airlines such as AeroMexico, Interjet and Volaris helping airport traffic to grow by 10% in 2012 Mexico’s airlines quickly picked up the market after Mexicana folded in 2010. With the airline’s possible comeback still on the horizon, the country’s domestic market is now dominated by low-cost carriers, which account for 55% of traffic. 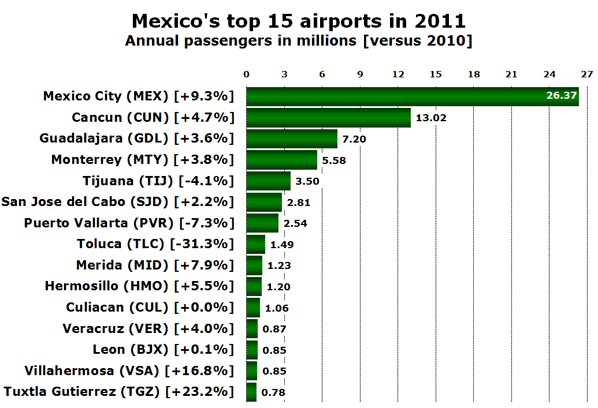 The biggest loser among airports in recent years has been Toluca, a secondary airport serving Mexico City, which was popular with LCCs as they could not get access to the city’s main airport. However, since Mexicana’s collapse, some carriers have either moved the majority of their operations across to Mexico City (Volaris) or split their operations between the two airports (Interjet).

In recent years, Mexico’s air transport market has had to contend with the outbreak of swine flu in early 2009 and the collapse of one of the country’s two main ‘legacy’ carriers, Mexicana, in August 2010. The impact on air travel of the swine flu outbreak was really contained within one month (May 2010) as the following graph, showing year-on-year change in domestic traffic makes clear. 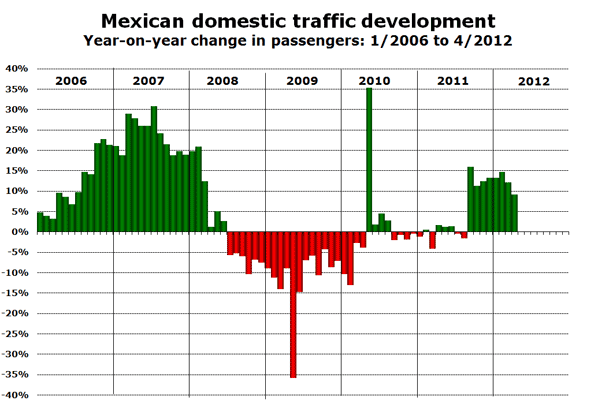 The demise of Mexicana had surprisingly little overall effect on domestic demand with other carriers rapidly expanding to provide additional capacity and load factors (and probably yields) improving.

From 14 domestic airlines to just seven in four years

Apart from Mexicana (and its associated airlines Mexicana Click and Mexicana Link), the country has also lost Aerocalifornia, Alma, Aviacsa and Avolar since the beginning of 2008, reducing the number of domestic carriers from 14 to seven, six if you consider AeroMexico and AeroMexico Connect as one airline. 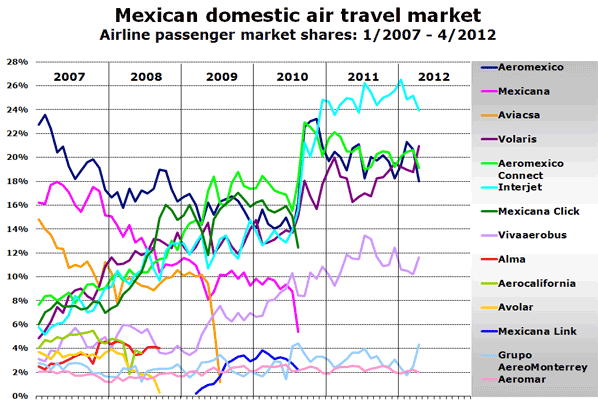 The other carriers are Interjet (with 24.0% share of the domestic market in April 2012), Volaris (20.9%), vivaaerobus (11.6%) and niche carriers Grupo Aereo Monterrey, trading as Magnicharters, (4.3%) and Aeromar (2.0%). With Interjet, vivaaerobus and Volaris all operating variations of the basic low-cost airline model, this means that LCCs have over 55% of the Mexican domestic market.

International traffic has benefited from the US FAA’s decision in December 2010 to upgrade the safety rating of Mexico’s airports, thus allowing Mexican carriers to start new routes to the US in 2011. International traffic was impacted more by the demise of Mexicana which resulted in Mexican carriers (mostly AeroMexico/AeroMexico Connect with some support from Volaris) having a modest 15% of the international market in January 2011, although by January 2012 this had increased to 25%, still short of the 30% being achieved when Mexicana was still operating in the summer of 2010. 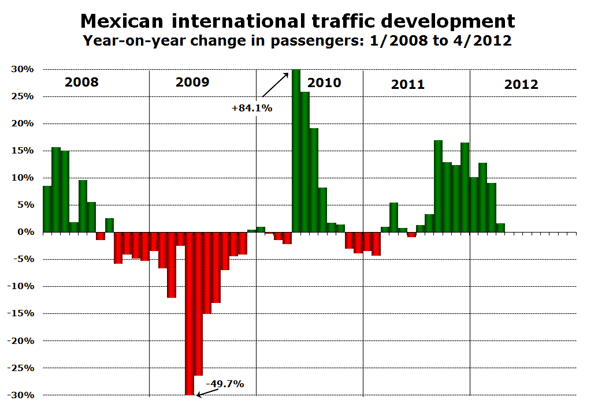 New international routes that have either already launched in 2012, or are expected to in the coming months are listed below by airline.