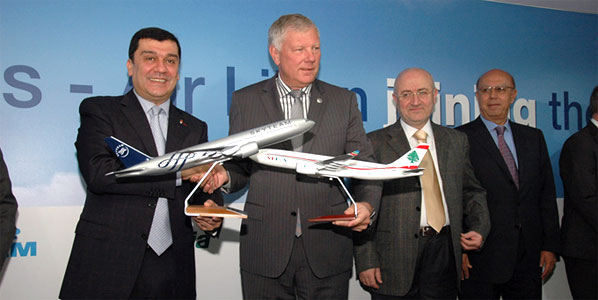 Changing planes: Middle East Airlines’ Chairman, Mohamad El-Hout, exchanges gifts with Leo van Wijk, Chairman of SkyTeam and former CEO of KLM – Amsterdam is one of the fundamental SkyTeam European hubs MEA does not yet serve.

According to a press release issued by the SkyTeam alliance during the recent IATA conference in Beijing, the next airline that will become an integrated member is Lebanon’s Middle East Airlines (MEA) on 28 June 2012. The carrier operates a fleet of 16 Airbus comprising eight A320s, four A321s and four A330-200s, all in a two-class configuration – Cedar Class (business) and Economy Class. According to analysis of schedule data for this summer, Middle East Airlines is responsible for just under 40% of scheduled seat capacity at Beirut airport offering non-stop flights to 31 destinations across Africa, Europe and the Middle East. The next biggest airlines in terms of weekly seat capacity are Air France and Emirates each with around 5% of the market. 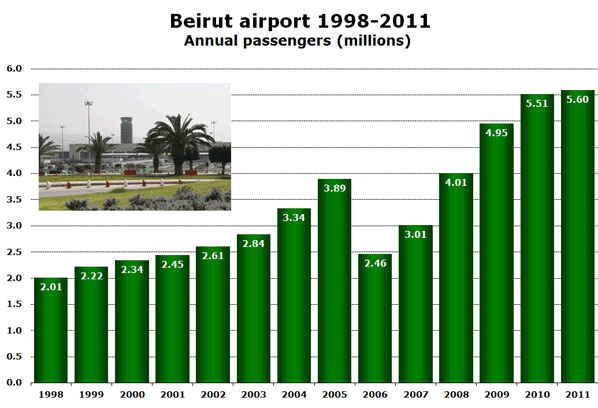 Since the late 1990s passenger numbers at Beirut airport have grown steadily, with the exception of 2006-07, which was seriously impacted by the Israeli military strikes on Beirut during July 2006 when the airport was specifically targeted. Last year passenger numbers reached a new peak of 5.6 million.

In terms of weekly capacity as measured by ASKs (Available Seat Kilometres) the airline’s leading route by some distance is Paris which is served with two daily flights. This is followed by Dubai and London Heathrow. MEA increased its Dubai frequency from double-daily to triple-daily on 14 June. 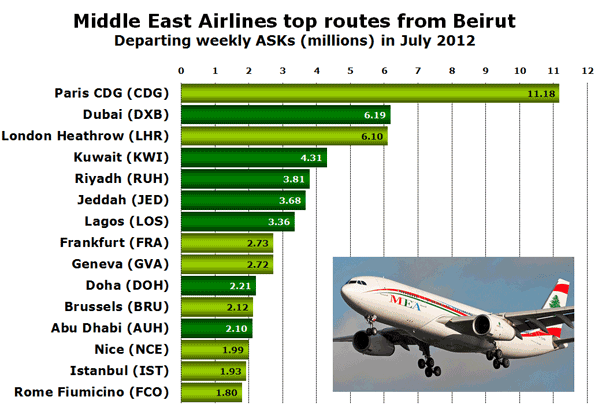 Four of the top 10 routes are to European destinations (shown in light green). Competition on the top routes is provided by Air France (which also serves Paris with two daily flights), bmi British Midland which serves London Heathrow, and Emirates and flydubai which both serve Dubai with double-daily flights.

MEA’s network is focussed on routes to Europe and within the Middle East, with a summary of the airline’s non-stop routes from Beirut provided in the following table.

Some of these routes are seasonal, such as Antalya, Bodrum, Dalaman, Nice and Rhodes). Paris, and Rome are major hubs for fellow SkyTeam alliance members Air France and Alitalia, but MEA does not currently serve the hubs of other European SkyTeam members Aeroflot (Moscow), Air Europa (Madrid), Czech Airlines (Prague), KLM (Amsterdam) or Tarom (Bucharest).