Revealed! New route opportunities at UK airports from routes dropped in past year 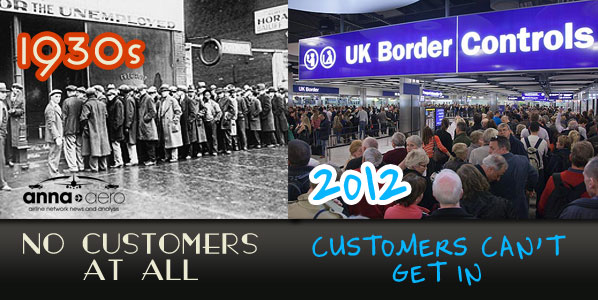 While anna.aero loves to celebrate and report on the launch of new airline services, we know from our readers that our analysis of routes that airlines have chosen to drop, is also much appreciated. This week, we take a look at UK airports and analyse which destinations that were served last August, with at least three weekly flights, are no longer served this August. This is not the same as looking at which routes airlines have dropped, as we are only interested in an airport-pair if no carrier is serving the route this summer. Where an airport has lost a destination, we have looked to see which carrier operated the route last summer, and identified when it ceased to operate.

21 routes have been lost from five of London’s main airports (we presume London Southend will be happy not to be included in this particular analysis). This is NOT the same as how many routes have been lost from all of London’s airports if we treated all London airports as a single entity. However, if we were to treat all of London’s airports as a single airport system, then the number of routes lost falls to eight; Ankara, Dresden, Galway, Harare, Lübeck, Münster/Osnabrück, Paderborn and Prestwick (Glasgow).

London’s five main airports have all lost at least one destination since last summer, with Stansted losing the most destinations from its network. The Essex airport, which handled 18 million passengers in 2011, has seen airberlin axe two of its three destinations, Ryanair drop two routes, easyJet one, and bmibaby disappear as it gradually winds down its operations following the sale of its parent company to IAG. AirAsia X moved its flights to Gatwick (before closing the route completely) while there are no longer non-stop flights to Turkey’s capital, Ankara.

Gatwick has also lost destinations as a result of Delta’s shift of all Atlanta flights to Heathrow, the demise of Danish carrier Cimber Sterling, Adria Airways’ decision to shift flights to Luton, and other route adjustments by British Airways, easyJet, and Ryanair.

Heathrow has seen relatively little change. The Dresden route was launched by Lufthansa in April 2010 and was initially operated with a bmi A319. This was then downgauged in summer 2011 to a Eurowings CRJ900. Vueling has used the slots from its dropped Seville service to increase service to Bilbao. Similarly, SriLankan has increased the number of weekly non-stop flights to Colombo from nine to 12 by dropping the flights that stopped off at Male in the Maldives.

Regional airports in the UK, while also welcoming a range of new routes, have also seen the termination of services to a variety of destinations. The increase in the Air Passenger Duty seems to have hit domestic markets in particular. The gradual winding down of bmibaby services has also had a significant impact at East Midlands Airport, while Ryanair has done some pruning to its Liverpool network as it builds its presence at nearby Manchester. Aer Arann has dropped a number of Irish routes as it focuses on becoming a feeder airline for Aer Lingus in Dublin, while Eastern Airways and Flybe have both elected to cut a number of (presumably unprofitable) domestic routes.

Under current economic conditions in the UK and the rest of Europe, it seems likely that there will be further route casualties in the year ahead. However, it should be noted that according to UK CAA data in the first five months of 2012 total passenger numbers at UK airports are just under 1% up on the same period in 2011, although most of this is accounted for by the extra day in February, meaning that traffic levels across all UK airports this year are basically the same as last year – hardly a “1930s-style recession”. To see how individual airports in the UK are performing, check out our regularly updated database of traffic and trend information for over 300 airports across Europe.