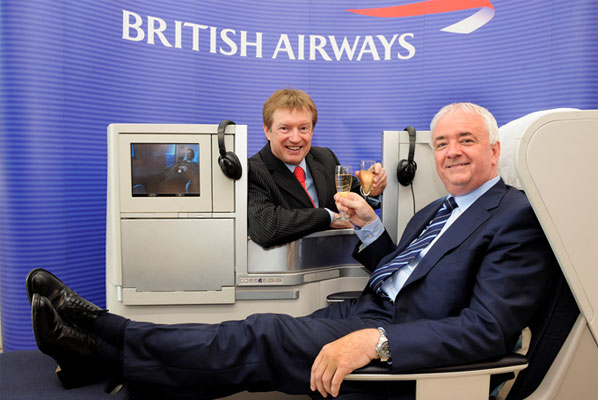 June 27 2012: Leeds Bradford Airport’s Commercial Director, Tony Hallwood, and CEO John Parkin, try out an authentic replica of the cabin for their new British Airways Heathrow service. BA has 15 new destinations from Heathrow this winter, including nine former bmi routes, but while there will be 23% more weekly flights, the increase in seats is only 12%.

Having acquired bmi British Midland from previous owner Lufthansa earlier this year British Airways (BA) is gradually integrating the airline’s Heathrow-based route network into its own. The process is not yet complete, but analysis of Innovata data reveals which former bmi routes have now officially become BA routes, and which additional destinations BA will be serving this winter which it did not serve a year ago.

BA has so far added a total of 15 new destinations from Heathrow this winter of which nine are former bmi routes. Two other destinations, Bologna and Tripoli, were launched during the current summer season leaving four new destinations starting this winter; Marseille from 28 October, Seoul Incheon from 2 December, and Leeds/Bradford and Zagreb from 9 December. As a result BA’s Bologna and Marseille services from London Gatwick will be dropped this winter.

Latest Innovata data shows that, with the addition of these 15 new destinations for this winter, BA is now serving 121 destinations non-stop from Heathrow in winter 2012/13, although this may rise still further as more of bmi’s medium-haul network is taken over. However, this is still some way behind the number of non-stop destinations provided by Turkish Airlines from Istanbul (184), Lufthansa from Frankfurt (156), and Air France from Paris CDG (143).

A current comparison between a typical week in December 2012 and December 2011 shows that BA will be operating some 23% more flights this winter thanks to its acquisition of bmi, but the number of weekly seats operated will increase by only 12%. If sector length is taken into account then the capacity as measured by ASKs (Available Seat Kilometres) is up less than 7%.