Lyon plans next phase of terminal development as it looks to grow LCC share to 30%; Emirates coming soon 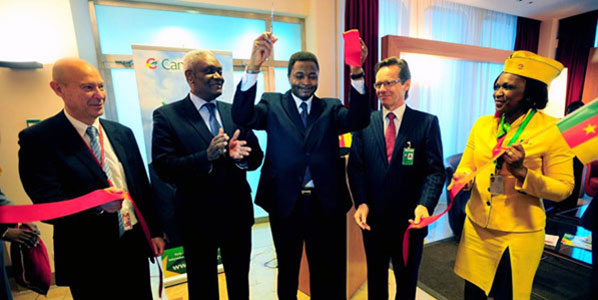 February 2012: Camair-Co, the new national airline of Cameroon, launches non-stop flights from Douala. In the last decade, Lyon’s international traffic has risen by 51% and now accounts for over 60% of total airport traffic.

Lyon Airport is France’s fourth busiest airport, and second busiest (after Nice) outside of Paris. Last year, passenger numbers grew by 5.7% to 8.4 million, the airport’s busiest ever year. During the last decade, total passenger numbers grew by 38%, but domestic traffic grew by just 20% while international traffic rose by 51%. As a result international traffic now accounts for around 61% of total airport traffic. Between 2007 and 2011, Lyon’s traffic grew by 15.2%. Its biggest rivals among France’s regional airports grew less quickly; Toulouse (13.4%), Marseille (5.7%) and Nice (0.2%). 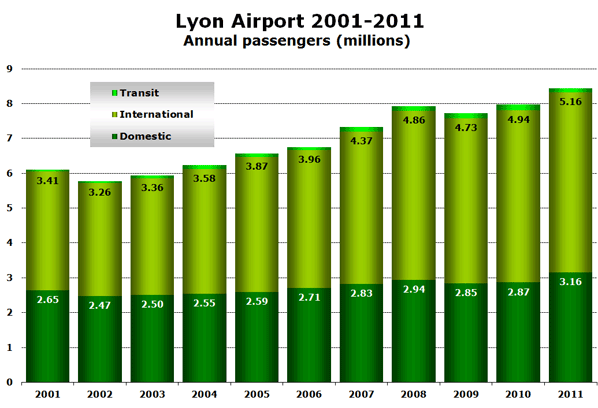 Traffic in the first five months of 2012 is down 2.9% with passenger numbers in May down 10% partly due to the government elections. According to the airport traffic is expected to grow by around 3% for the rest of the year resulting in growth of around 1% for the year as a whole.

Air France and its regional partners (Brit Air and Regional) are still the airport’s leading airline handling over 3.3 million passengers last year, up 3.3% on 2010. However, Air France Group’s share of the market has fallen from just over 50% in 2007 to under 40% in 2011. 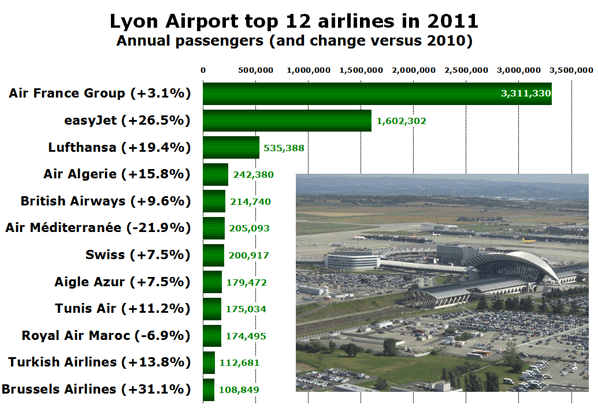 easyJet has been the fastest-growing airline since making the airport a base in April 2008. Since then its presence has grown to four aircraft and its network has expanded to include 27 destinations during the summer (Air France serves 35 destinations non-stop) with Bristol and Liverpool served as seasonal winter-only routes to cater for ski traffic. The most recent new route to Ajaccio started in April, while flights to Palermo start on 8 July.

Most of the other leading airlines at the airport grew their traffic in 2011 with the exception of charter carrier Air Méditerranée and Royal Air Maroc.

No single route dominates at Lyon but five of the top six routes are domestic destinations (shown in pale green). Bordeaux is the leading route with Air France and easyJet both operating services, followed by Paris CDG. Even though Paris is only just over 400 kilometres away and Lyon and Paris are connected by the high-speed TGV rail network, the CDG service is still popular with passengers wanting to connect to other Air France services in the capital. 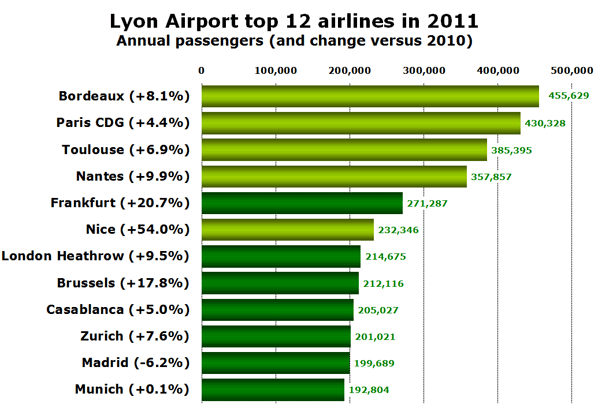 New services already launched this summer include Air France to Bastia, Budapest and Naples, easyJet to Ajaccio, Lufthansa to Berlin Tegel, Vueling to Barcelona and Palma de Mallorca, and WOW air to Reykjavik. Apart from the already mentioned new easyJet service to Palermo, another new service starting before the end of the year is OLT Express to Warsaw launching at the end of October.

Today, 4 July, Emirates also announced that it will begin serving Lyon five times weekly from its Dubai hub on 5 December, using A340-500 aircraft.

All major country markets grew in 2011 except Tunisia

Analysis of the airport’s traffic data by country market reveals that Germany, the UK, Spain and Italy are the largest country markets for flights to and from Lyon. After that come the North African states of Morocco, Algeria and Tunisia. Due to the ‘Arab Spring’ which resulted in civil unrest in Tunisia this market saw a 30% reduction for traffic from Lyon last year. So far in 2012 domestic traffic is down 4.3% while passengers on international flights are down less than 1%. 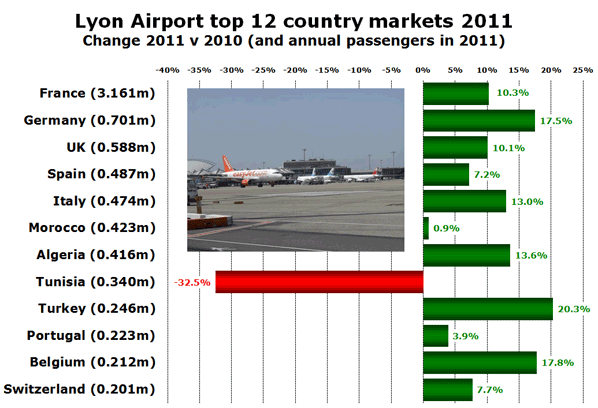 New terminal facilities are due for completion in time for Euro 2016, providing enhancements for users of both Terminal 1 and the low-cost Terminal 3 (although the actual fabric of the existing Terminal 3 will be sacrificed as part of the development). Based on this drawing it seems that Air France Group’s low cost subsidiary, Transavia.com, is going to grow significantly at the airport…

Although a low-cost facility was opened as long ago as April 2008, a dedicated low-cost satellite was opened last November and is used by Air Arabia Maroc, easyJet, Transavia.com and most recently by Vueling. This satellite has no air bridges but does have gates for 10 medium-sized aircraft. Airport charges at T3 are 40% lower than at the other terminals.

The airport’s next project is to build additional terminal infrastructure which will help improve both Terminal 1 and 3. The plan is for this facility to be ready in 2016 in time for the next major football event in Europe, Euro 2016. The airport envisages that in five years LCCs will account for a minimum of 30% of passenger demand (up from the present level of around 21%). By 2030 the airport hopes to be handling around 15 million passengers.