Copa Airlines of Panama officially joined Star Alliance on 21 June. The carrier has in recent years been consistently amongst the most profitable in the world, exploiting its location to create an efficient hub and spoke network in Central America. The airline, which also operates a subsidiary in Colombia (Copa Airlines Colombia, formerly known as Aero República), operates a fleet of 80 aircraft comprising 36 737-800s, 18 737-700s and 26 Embraer E-190s. So far this year the airline has received two 737-800s in March, another two in April and one in May. At its home base in Panama City, the airline accounts for a massive 85% of the airport’s total seat capacity, serves some 60 destinations non-stop, and operates between 120 and 125 departures every day of the week.

Capacity up by 30%, 11 new routes from Panama City

Analysis of schedule data for July 2011 and July 2012 using SRS Analyser shows that Copa Airlines has increased the number of weekly flights in the last 12 months by 20%, increased weekly seat capacity by 27% and raised the number of ASKs (Available Seat Kilometres) offered by 32%. 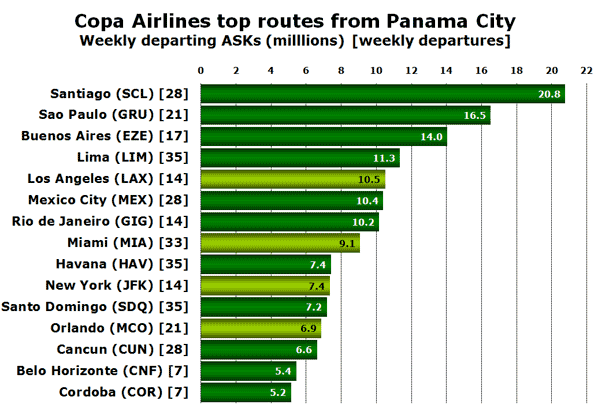 In terms of biggest routes as measured by ASKs, Santiago in Chile leads the way followed by Sao Paulo in Brazil and Buenos Aires in Argentina. US routes (shown in pale green) account for four of the airlines top 12 routes as measured by ASKs. During the last year, the airline has added 11 new non-stop services, all from its base at Panama City. These are summarised in the following table.

Copa Airlines CEO Pedro Heilbron said, “Joining Star Alliance is an accomplishment for our company.  We are proud to become part of the largest and most prestigious global airline network and to draw the world’s attention to the Isthmus of Panama. In addition, Copa will provide frequent flyers around the world with more benefits and travel options throughout the Latin American region, making it easier for them to connect through Tocumen Airport and visit our country. The Copa Airlines family is pleased to take this strategic step, which provides our passengers yet another guarantee of world-class service and operations.”

Star Alliance CEO Mark Schwab said, “On behalf of the Star Alliance Chief Executive Board, it gives me great pleasure to welcome Copa Airlines to the Star Alliance family. The addition of this quality aviation group strengthens our presence in the rapidly growing Latin American market.”