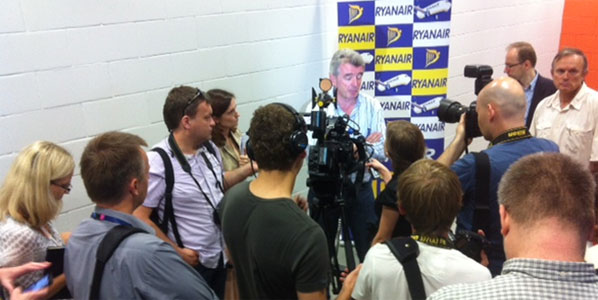 July 3 2012: One of the finest corridors of Warsaw Modlin Airport provides the backdrop for Ryanair’s lavish PR launch for the 19 new routes it is starting when the new airport opens on July 16. On the same day Ryanair’s Deputy CEO, Michael Cawley, was in Maastricht announcing its 51st base, and first in the Netherlands. (We're still waiting for those pictures!)

Europe’s biggest low-cost carrier has revealed that Maastricht will become the airline’s first Dutch base from December 2012 with one 737-800 to be based there enabling three new routes (Dublin, London Stansted and Venice Treviso) to be launched. The Stansted route was first served by Ryanair between 30 April 2003 and 14 January 2004, after which the airline neglected the airport until the introduction of flights from its base on Girona in June 2007. It currently operates to 11 destinations from the airport; five in Spain, four in Italy and two in Portugal. The decision to base an aircraft at Maastricht this winter is curious as last winter Ryanair chose to operate virtually no flights from the airport, which is not that surprising given the seasonal nature of its route network at the airport.

Other destinations served by Ryanair from Maastricht in the past include Reus and Valencia in Spain. Thanks to Ryanair’s growing network the airport has seen passenger numbers more than double from 178,000 in 2007 to a record 362,000 in 2011. Maastricht is only 80 kilometres from another Ryanair base at Weeze in Germany, and also only 80 kilometres from Düsseldorf airport.

Ryanair’s Michael Cawley speaking on 3 July said, “Ryanair is delighted to announce Maastricht as our 51st base and unveil 3 new routes (14 in total) – to/from Dublin, London Stansted and Venice Treviso – beginning in December, as part of our winter schedule which go on sale tomorrow. Dutch consumers/visitors can now beat the recession and escape KLM’s high fares and fuel surcharging by switching to Ryanair’s lowest fares and our no fuel surcharge guarantee from Maastricht to 14 exciting European destinations, including Milan, Barcelona and Pisa, amongst others. Ryanair’s 450,000 passengers per annum will sustain up to 450 jobs in Maastricht.”