SAS expands summer service to Spanish beaches and Croatia; ASKs up 10% despite 2% reduction in flights SAS hopes to get up to 120,000 annual passengers on its resumed Copenhagen-Shanghai Pudong service, an anna.aero “Route of the Week” in March 2012. This second Chinese service, after Beijing, has helped produce an 8.5% increase in SAS’ average sector length this summer.

SAS, the flag-carrier for Denmark, Norway and Sweden, has struggled financially in recent years and has come under increasing pressure from low-cost rival Norwegian as that carrier expands across Scandinavia. However, analysis of Innovata schedule data for this summer (July) using Diio Mi reveals that while the number of flights offered is down 2%, the number of weekly seats is up 2% and most tellingly capacity (as measured by ASKs – Available Seat Kilometres) is up just over 10%. What this reveals is that SAS’ average sector length this summer has grown by 8.5% from 1,232 kilometres to 1,336 kilometres. A detailed analysis of SAS’ top 12 airports (in terms of weekly seat capacity) reveals which airports are being targeted for growth and which have seen significant cutbacks. 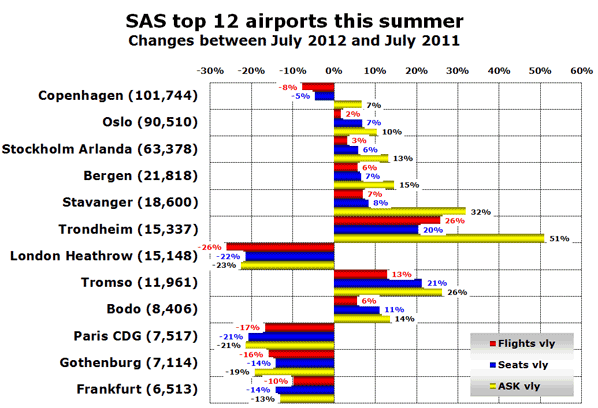 All of the top six airports have seen ASK growth, even though the airline’s busiest airport at Copenhagen has seen a reduction in the number of flights and the number of weekly seats on offer. There has been significant year-on-year expansion at several secondary airports in Norway, notably Trondheim, Stavanger and Tromso. A summary of all routes operated this ‘summer’ (with at least two weekly frequencies) that did not operate last ‘summer’ is provided in the following table.