Boeing remains in the lead of the 2012 delivery race, although it now outperforms its European rival Airbus by eight aircraft by the end of June, which is one unit down on May results. While Boeing’s number of single-aisle aircraft delivered was one unit lower than the previous month, the 41 narrowbodies delivered by Airbus in June provided for a significant year-on-year increase of nine units.

With 15 widebodies delivered in June, Boeing fared considerably better than Airbus in this segment, as the European manufacturer in this month delivered only 10 widebody units; however, this was also a 50% improvement compared with its deliveries a year before. 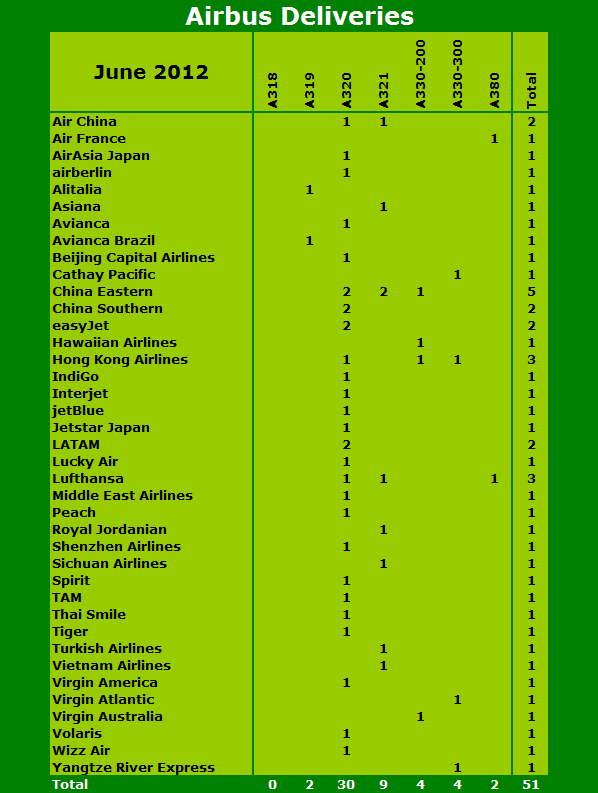 Airbus closed the month with a total of 51 delivered units, which is six aircraft more than in May 2012 and ten units more than in June last year.

Deliveries in June were led by the A320 family, with a total of 41 of these single-aisle jets provided to airlines worldwide. This included the first A320s for two new Asian low-cost airlines; Thai Smile and AirAsia Japan, while Jetstar Japan and Peach continued to receive further of the type. Notably, for the second month in a row, China Eastern was the largest recipient. The carrier took delivery of two each of A320s and A321s. This year to date, Airbus has delivered 219 single-aisle airframes, 11 more than its American rival.

Among the ten widebody deliveries in June were two A380s. One each strengthened the inventories of Air France and Lufthansa, bringing their respective fleets of the aircraft type to eight and ten. Additionally, customers in the US, Australia, China and Europe received a total of four A330-200s and two A330-300s. Hong Kong Airlines took delivery of the most widebody aircraft from the European manufacturer, as it took one each of the two A330 models during June. 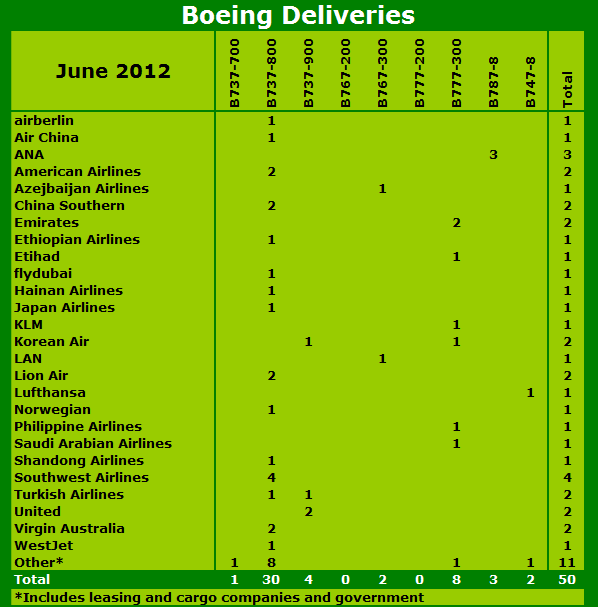 Boeing closed June with a total of 50 units delivered, one aircraft more than in May. Airlines received a total of 35 narrowbodies from the American air framer. Notably, the single biggest recipient of single-aisle aircraft for the second consecutive month was Southwest, which took delivery of four 737-800s, bringing this year’s total received by the airline to 12 units. Boeing is yet to deliver 61 737-800s to the American carrier. Six further carriers received more than one narrow-body aircraft from the American manufacturer during last month.

Two more widebody units were delivered in June than in May, and Boeing improved its year on year performance by 50%. Notably, ANA took delivery of three 787-800s, bringing the total operated by the airline to 10. Following the airline’s 2004 order, Boeing is yet to deliver 26 units of the type to its launch customer. Emirates was the only other airline to receive more than one widebody airframe last month, taking two 777-300s.