Monarch selects Leeds Bradford as its sixth UK base 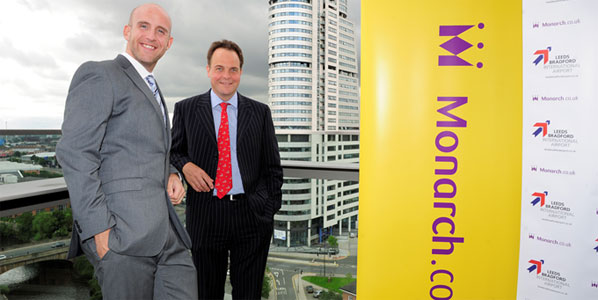 Monarch Airlines’ Marketing Manager, James Massey, celebrates the base announcement and 13 new routes with James Broughton, Sales and Marketing Manager, Leeds Bradford Airport. (The skyscraper in the background is the 32 storey, 112 metre Bridgewater Place. The office and residential development, which became the tallest building in Yorkshire when it opened in 2007, is known locally as “The Dalek.”)

UK leisure carrier Monarch Airlines has selected Leeds Bradford airport as its sixth UK base, with two A320 aircraft to be based at the Yorkshire airport starting next March, offering non-stop flights to 12 destinations across the Mediterranean. The airline had previously announced plans to offer flights this winter to two popular ski destinations (Grenoble and Munich).

All of Monarch’s new summer routes are already served by at least one other carrier, with Jet2.com, Ryanair and Thomas Cook Airlines all having a significant presence.

Marketing Manager of Monarch Airlines, James Massey said, “The strategy for Monarch Airlines is now firmly focused on its scheduled services and we are delighted to add Leeds Bradford as our sixth UK base. The launch of Leeds Bradford as a base for the airline has the potential to create around 200 jobs within the local area and will provide a gateway for inbound tourism with an estimated 20,000 EU passengers travelling from Europe to West Yorkshire.”