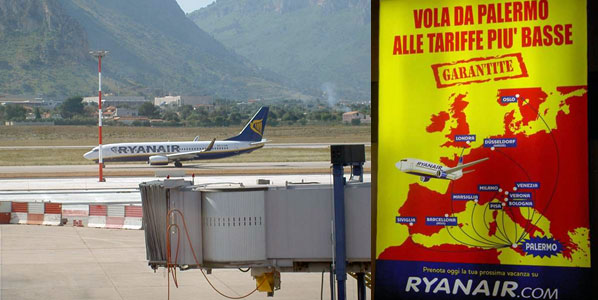 In spite of having a base at Trapani Airport, Ryanair ranks as the second-largest airline at the airport in Palermo, Sicily’s capital, merely 80 kilometres away. 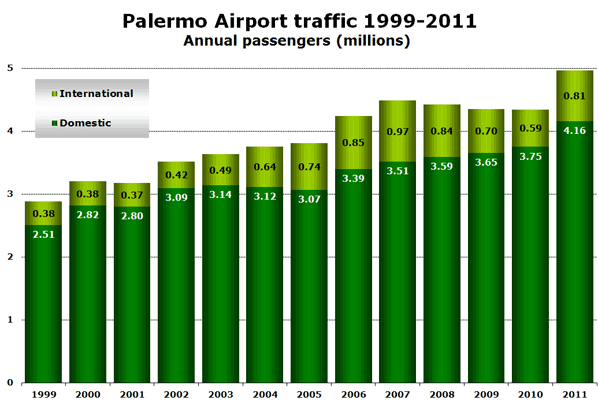 In spite of Sicily’s appeal as an international tourist destination, domestic traffic makes up 84% of the airport’s passengers. After peaking at almost a million passengers in 2007, international traffic has been on the decline in Palermo. Part of the explanation lies in the simultaneous emergence of Ryanair’s operations at nearby Trapani Airport, merely 80 kilometres away. The combined passenger numbers of the two airports, whose catchment areas partly overlap, nearly reach those of the airport in Catania, Sicily’s largest airport, located on the island’s east coast.

The strong growth in passenger numbers last year, +14%, can largely be explained by the temporary move of commercial operations from Trapani to Palermo during the time the former airport was used solely as an air base for NATO’s operation in Libya. As a consequence, passenger numbers at Palermo Airport for the first five months of this year are down by 8% as a whole, in spite of a small growth in international passenger numbers at +2%. 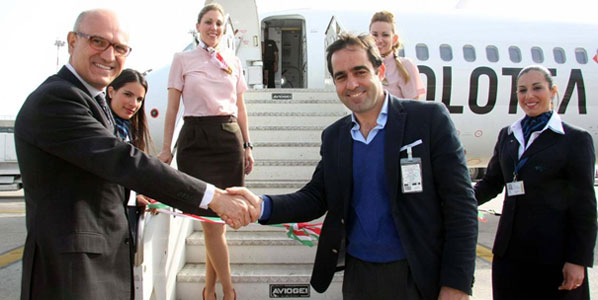 Since the airline’s launch in April this year, Volotea has already established itself in Palermo and now operates 8 routes; 5 domestic and 3 international.

Although Ryanair has served Palermo since 2003, alongside its later base at Trapani, it is only as of last year – the same year that the low-cost airline was required to consolidate its Sicily operations to Palermo for part of the year – that Ryanair has risen to become the airport’s second-largest airline. Ryanair’s seat capacity at Palermo is now three times of what it offered in 2010.

Leisure and low-cost airlines dominate Palermo, while foreign network carriers only have a limited presence. Except for the local flag carrier Alitalia feeding its Rome Fiumicino hub, Lufthansa operates year-round from Munich and during summer from Frankfurt, while none of airberlin’s four routes are from either of its main hubs. Two smaller flag carriers, Tunis Air and Luxair, are also present in Palermo.

Spanish market up by a third 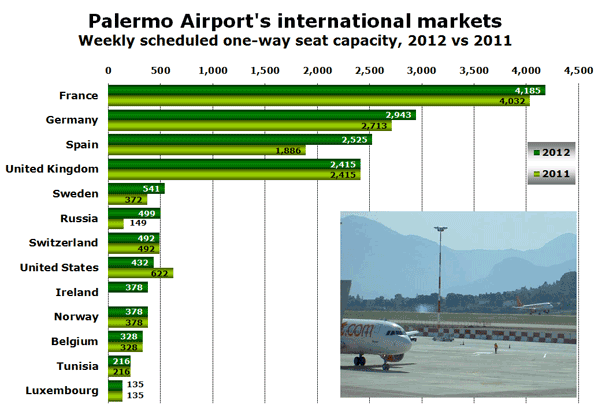 Of international country markets, France is dominates with more than a quarter of all international seat capacity in Palermo. The latest addition to the airport’s route network is Lyon, from where easyJet began operating this past weekend.

However, the Spanish market is on the rise, with seat capacity up 34% on last year. Volotea has launched two routes from the Balearic islands, Ibiza and Palma de Mallorca, while Ryanair has added flights from Madrid and Reus to Palermo. Meanwhile, Ireland is a new country market for Palermo since last year, currently being served by Ryanair twice-weekly out of Dublin.