Perth airport welcomes Qatar Airways; traffic growing at 12% in 2012 after more than doubling between 2003 and 2011 Last weekend saw Perth Airport in Western Australia welcome the first non-stop flight from Doha operated by Qatar Airways. The new service will initially operate three times weekly and will be served by one of the airline’s 777-200s. This latest route development will help to maintain Perth’s impressive growth rate in recent years which has seen passenger numbers more than double in just eight years, from 5.3 million in 2003, to 11.4 million in 2011. The airport is the fourth busiest in Australia after Sydney, Melbourne and Brisbane, reflecting Perth’s ranking as the fourth most populated city in the country (1.74 million). 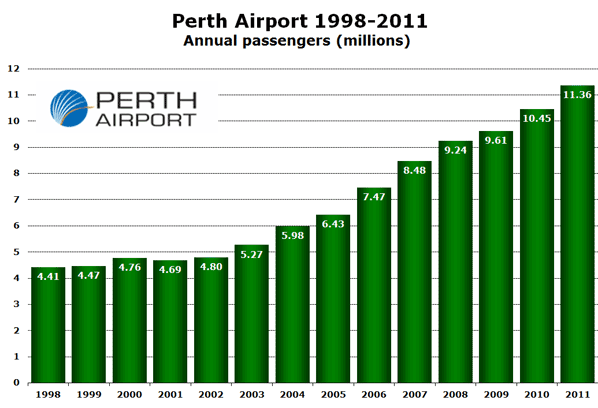 Even without the launch of Qatar Airways’ new service, 2012 was already shaping up to be a good year for the airport with passenger numbers up almost 12% in the first four months of this year, with over one million passengers passing through the airport in January, March and April. 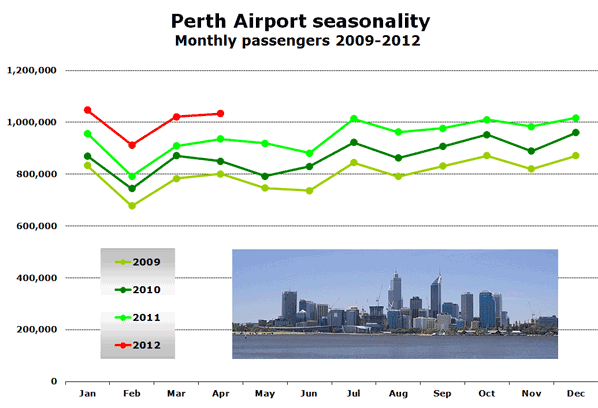 Ignoring February (which has fewer days), the airport’s seasonality profile is relatively flat, though there are minor peaks in July, October and December. Being in the southern hemisphere Perth’s summer occurs between November and April. 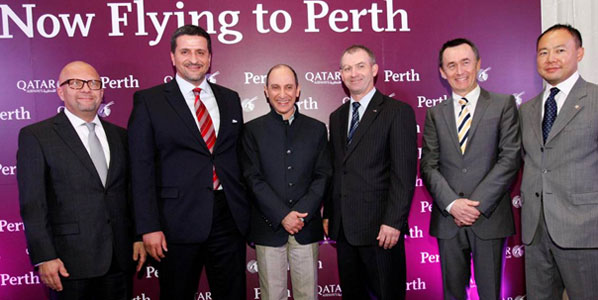 Sydney and Melbourne routes account for 30% of airport’s traffic

According to Australian government statistics the airport’s top 10 domestic routes last year generated just over seven million passengers, of which just over half were on two routes. Traffic to and from Melbourne grew by almost 7% to a record 1.86 million, while Sydney traffic was not far behind, also up almost 7% to 1.73 million. Both of these routes offer customers the choice of travelling with either Jetstar, Qantas or Virgin Australia, while on the Melbourne route passengers also have the option of choosing to fly with Tiger Airways Australia. 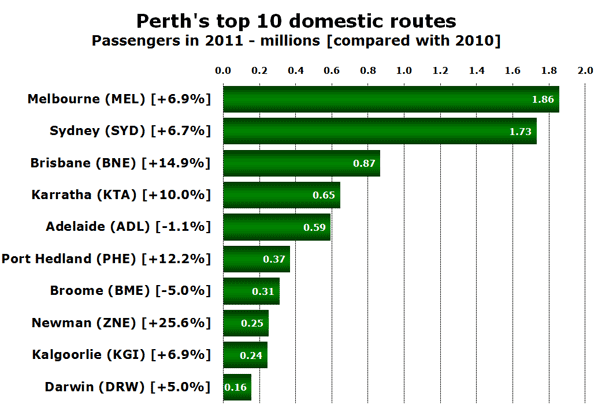 The leading international routes in 2011 were Singapore (with almost 970,000 passengers), Denpasar on the Indonesian island of Bali (with just over 800,000 passengers), followed by Kuala Lumpur, Dubai and Hong Kong. It is worth noting that Perth is in fact closer to Bali (and Indonesia’s capital Jakarta) than it is to either Canberra (Australia’ capital) or Sydney.

In terms of weekly scheduled seat capacity Qantas dominates with 46% (serving 18 destinations, 16 in Australia plus Hong Kong and Singapore), with its low-cost subsidiary Jetstar accounting for a further 8% (serving six domestic destinations plus Denpasar and Jakarta in Indonesia). Virgin Australia is Qantas’ nearest rival, with its network of 12 non-stop destinations (including international destinations Denpasar, Phuket and Christmas Island) generating some 18% of Perth’s weekly seat capacity. Although local carrier Skywest Airlines accounts for almost 10% of all aircraft movements, its network of 10 domestic destinations generates less than 4% of the airport’s seat capacity. 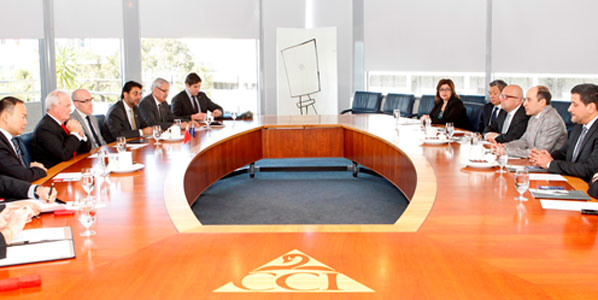 Talking trade: After the route launch Qatar Airways’, CEO Akbar Al Baker, led trade talks in Perth with members of the Chamber of Commerce and Industry of Western Australia. The meeting was also attended by Qatar’s Ambassador to Australia, HE Yousef Ali Al Khater, and Australia’s Ambassador to Qatar, HE Pablo Kang.