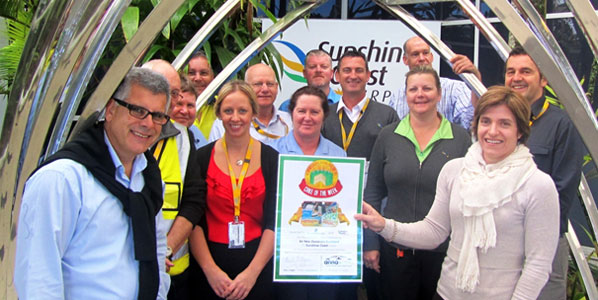 Peter “Peet” Pallot, General Manager of Queensland’s Sunshine Coast Airport (left), celebrates winning anna.aero’s “Cake of the Week” for the launch of Air New Zealand’s new Auckland service. anna.aero had complaints from United, the world’s biggest airline, because they thought they should have won.

Queensland’s Sunshine Coast Airport baked two cakes – “arrivals” and “departures” versions – to win last week’s anna.aero Cake of the Week, securing a win against stiff competition from TAV, which created a Bosphorus Bridge cake for the launch of United’s New York-Istanbul service. United’s new air service won anna.aero’s Route of the Week, but anna.aero received an e-mail from James Mueller, United’s VP Atlantic & Pacific Sales, thanking us for this recognition but complaining: “I thought we deserved ‘Cake of the Week’ too!”

The two Sunshine Coast cakes were baked and decorated by Wendy Berrospi from Sweet Creations in Buderim. The cakes were cut by the Irwin family, curators of Australia Zoo – one of the many superb attractions served by Sunshine Coast Airport. We now have pictures from the launch of Condor’s new route to Baltimore/Washington, which we  reported on last week . Cutting the ribbon were Gunnar Schmidt, Condor's Chief Pilot and Director of Flight Operations; Paul J. Wiedefeld, Executive Director, Baltimore/Washington International Airport; and Doris Brunner, First Officer. ASUR’s Route Analysis and Development Manager, Alejandro de Leo Winkler, supplied us with these pictures from the recent launch of Virgin Atlantic’s service from London Gatwick to Cancún on the Mexican coast. Sir Richard Branson himself was on-site, sporting his favourite Mexican costume, along with his cabin crew.

BA back at Belfast City 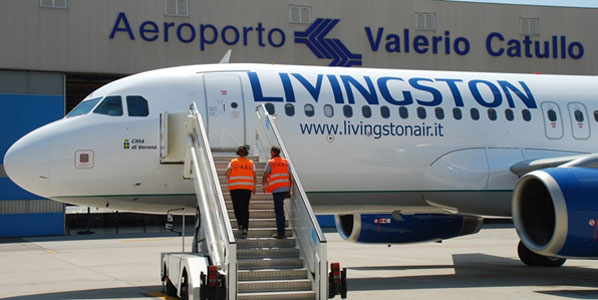 Livingston, the Italian charter airline that launched earlier this year, opened its second base at Verona Airport. Riccardo Toto, CEO and the owner of Livingston, said: “We’ve had some very good response from the market, and managed to build strong relationships with tour operators and travel agents alike. The new base is a significant step towards the consolidation of our market activity.”