While the rumours about potential merger with Alitalia have gone quiet, Blue Panorama and its low-cost offshot, blu-express, shift their focus away from Italian domestic market. Five of six new summer routes are bound for the Greek Islands.

Earlier this year it was announced that Alitalia planned to merge with two other Italian carriers; Blue Panorama and WindJet. Since then things have gone rather quiet and Blue Panorama’s website makes no mention of it. Meanwhile, Blue Panorama’s in-house Rome-based LCC blu-express this week launches two new routes to Greece, bringing to 10 the number of Greek destinations served this summer. Interrogation of the airline’s on-line timetable tool reveals that between now and the end of July a total of 30 destinations will be served by a combination of the two carriers from Rome. 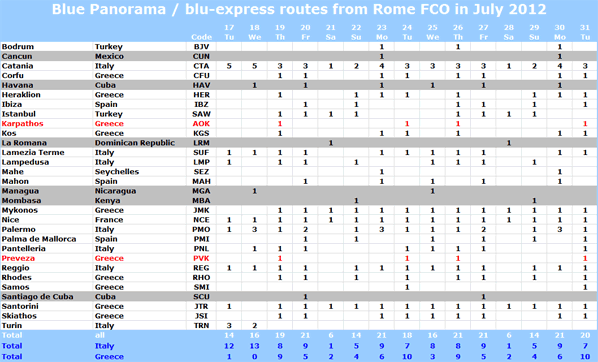 On 19 July the schedule swops from being mostly domestic to incorporating numerous routes to Greece as well as Nice in France, three destinations in Spain and two in Turkey. To free up aircraft time for the international routes domestic flights to Turin are suspended until 3 September, while Catania flights are reduced from around five daily flights to just three daily flights.

The blu-express fleet comprise six 737s (a mix of 148-seat -300s and 167-seat -400s), while Blue Panorama, which operates the long-haul services to Africa and Central America, has at its disposal a couple of 757s and four 767s, according to the airline’s website. The July schedule has the aircraft kept busy during the week but operating significantly fewer flights on Saturday.