France, Germany, Spain and UK report better airport traffic results in June than in May European traffic driven by novelties: easyJet’s new base at London Southend was the fastest growing UK airport in June, while Iberia Express helped fill the vacuum after Spanair’s demise.

Traffic data for June for airports in Europe’s five biggest aviation markets suggests that year-on-year at least four of the countries did better in June than in May. Figures for Italian airports are not yet available. Germany’s growth for June may be overstated since the only data available was for Berlin’s two airports, Munich and Frankfurt, and Berlin Tegel’s impressive 10% growth in June was driven by the assumption by airlines that the new Berlin Brandenburg airport would be open offering lots of shiny new capacity. Instead the extra traffic is being squeezed through the existing Tegel facilities. 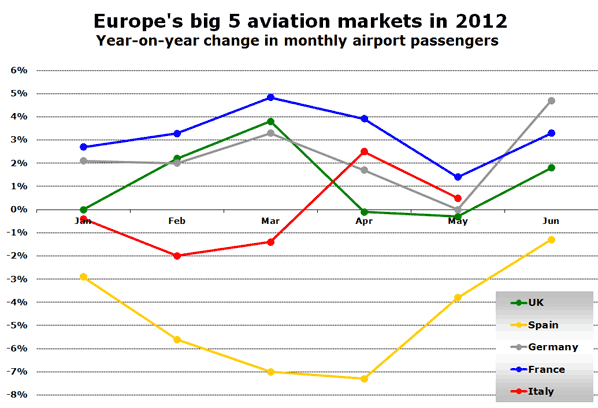 Source: ADV, AENA, Assaeroporti, UK CAA, individual airports NB. February 2012 had 29 days compared with 28 days in 2011. * June data for Germany based on figures from Berlin (SXF and TXL), Frankfurt and Munich only.

Spain’s traffic trend has improved significantly in the last two months as airlines have rushed to fill capacity gaps left by the demise of Spanair in January, the launch of Iberia’s new lower-cost Iberia Express subsidiary, and also helped by Spain being a reliably sunny summer holiday destination for travellers from northern Europe, where the weather has been particularly wet and unseasonal for some time, especially in the UK.

UK airports growing once more after two months of decline

After small declines of 0.1% and 0.3% in April and May respectively, passenger numbers at UK airports were up just under 2% in June with the country’s three busiest airports all recording growth; London Heathrow (+1.6%), London Gatwick (+4.2%) and Manchester (+6.6%). The UK’s fastest-growing airport is London Southend (thanks to easyJet’s new flights from the airport this summer) which handled 77,580 passengers in June, making it comparable to Bournemouth and Doncaster/Sheffield.