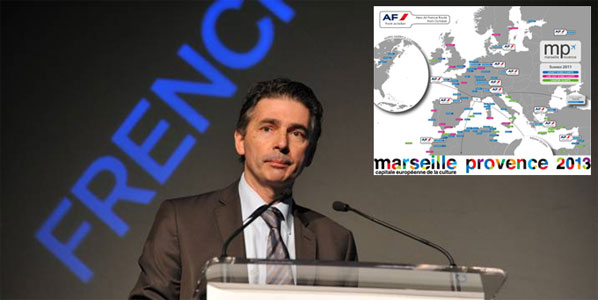 Henri de Peyrelongue, SVP Network for Air France KLM, spoke at length about Air France's new regional bases during FrenchConnect at Disneyland Paris earlier this year. The Marseille 'hub' opened last October and has already seen nine routes axed, while the Toulouse 'hub' has lost four of its new routes for this winter, indicating that the airline is not tolerating routes that fail to perform adequately from the start. (Photo courtesy of FrenchConnect)

Last year, Air France announced that it planned to fight back against low-cost carriers at some of France’s biggest regional airports, by creating regional ‘hubs’ and greatly increasing the number of international destinations served non-stop. The first airport to benefit was Marseille from where several new services were launched from 2 October with several more starting this March. However, recent schedule updates indicate that an alarmingly high proportion of these routes have either already been axed, or will cease to operate before the start of the winter season. A summary of the new routes from Marseille and what has happened is provided in the following table.

Of the 17 new routes launched between last October and the start of the summer season, nine are not operating this winter, suggesting that over half of the new routes have failed to produce satisfactory financial results fast enough. On only four of the nine routes dropped did Air France face direct competition; Norwegian to Copenhagen, Ryanair to Brest and Eindhoven, and Vueling to Barcelona.

Signs of trouble in Toulouse as well?

Following the launch of the Marseille ‘hub’ last October, Air France then announced plans to launch 16 new international routes from Toulouse starting on 1 April. Two of these routes (five weekly services to Brussels and Geneva) were never launched. The Brussels route was already served by Brussels Airlines and also easyJet (since the end of March 2012), while Geneva was and still is served by easyJet.

Recent schedule updates indicate that so far a further four routes will not operate this winter. Athens, Berlin, Malaga and Vienna flights will end at the end of the current summer season, though Athens and Malaga may just be seasonal cancellations and could return next summer. That leaves just 10 routes that Air France will operate from Toulouse this winter for the first time; Seville and Tunis both with four weekly flights; Casablanca, Hamburg and Venice with three weekly flights; and Istanbul, Malta, Marrakech, Naples and Prague each with just two weekly flights. As always, further changes remain possible in the coming months.