Going strong: Despite its protestations, Ryanair still grows at London Stansted. Warsaw Modlin Airport, which opened its doors on Sunday with a little help from Michael O’Leary, is one of the 113 destinations served by Ryanair from London Stansted. Flights to Maastricht start in December.

London Stansted Airport remains by far Ryanair’s biggest base. Between 1994 and 2006, passenger numbers at the airport grew from 3.3 million to 23.7 million thanks to the explosion in the UK low-cost market driven by Ryanair, Go, easyJet and buzz. However, since 2007, the airport’s passenger numbers have fallen back to just over 18 million in 2011. 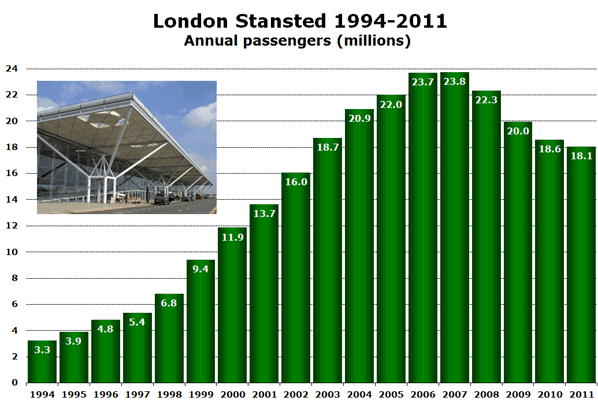 A closer look at scheduled seat capacity by airline over the last decade reveals that despite its frequent protestations about charges at the airport, Ryanair has actually increased its capacity at the airport this year compared with 2011. It has also increased the number of destinations served from 106 in August 2011 to 113 in August 2012. 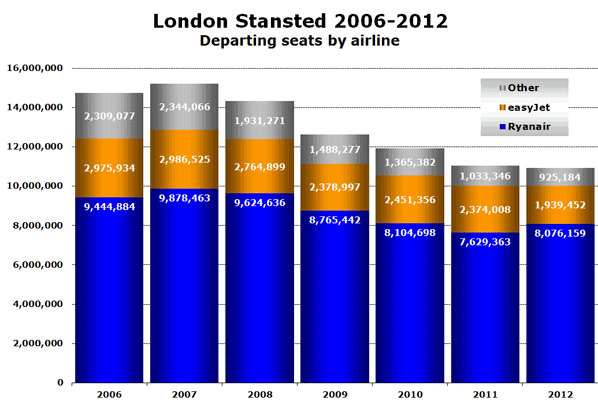 In contrast, easyJet (which acquired Go in 2002 to establish a presence at the airport) has cut back its annual seat capacity every year since 2008. Its last new routes at the airport were launched in 2010 to Cagliari, Bodrum, Dalaman, Dubrovnik and Split, of which only Cagliari is a year-round route. During the last 12 months the carrier has dropped routes to Faro, Fuerteventura and Funchal (Madeira). As a result its estimated seat capacity at Stansted in 2012 is down around 18%, with many of its other routes seeing frequency reductions this summer.

Based on schedule data analysis, since 2007 Ryanair has cut annual capacity by around 18%, easyJet by around 35%, and all other carriers by around 60%. As a result Ryanair and easyJet now account for well over 90% of all annual scheduled seat capacity. germanwings is now the airport’s third busiest airline with double-daily flights in summer to Cologne/Bonn, Hannover and Stuttgart. 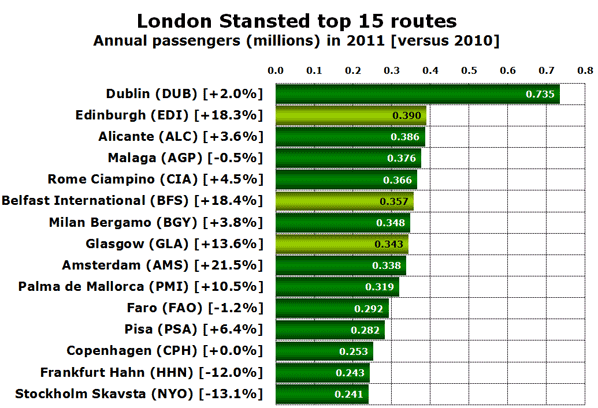 Of the top 15 routes, three are UK domestic routes while the remaining 12 are international routes to European destinations. Although the three big domestic routes all showed significant growth, domestic traffic as a whole was down almost 16% as a result of dramatic reductions on other UK domestic routes to Newcastle (-77%), Belfast City (-76%) and Glasgow Prestwick (-61%).

Despite the downturn in passenger numbers in recent years the airport continues to welcome new services with Ryanair alone starting nine new routes in 2011.

The number of new routes already started or expected to launch in 2012 is dominated by more new Ryanair routes, of which three are to Greece, one to Cyprus and one to Malta.

As a result according to OAG schedule data for August 2012, passengers now have a choice of 151 destinations served non-stop from London Stansted.