With new destinations, including Fukuoka in Japan and New York JFK, launched since last April, Hawaiian Airlines is one of the fastest growing airlines in the second quarter of 2012.

Allegiant Air, Hawaiian Airlines and Spirit Airlines all reported RPM growth of more than 15% in the three month period between April and June. The only carriers to report RPM declines in April, May and June were Frontier and Southwest, with American almost joining them, saved by a 0.2% RPM growth in May. 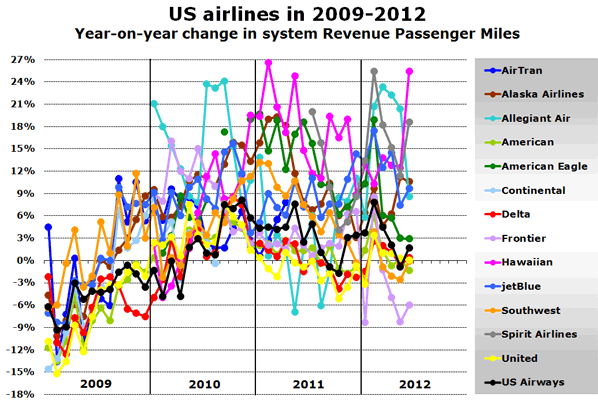 In June 10 of the 13 airlines for which data has been collected reported higher load factors than a year ago, while the remaining three (Allegiant Air, Spirit Airlines and US Airways) were all down less than one percentage point. Alaska Airlines saw a 2.5 percentage point load factor improvement (to 87.9%) in June while JetBlue saw a massive 3.8 percentage point improvement last month, to 85.8%. A total of 10 airlines had load factors of above 85% in June, with only Southwest (84.4%), American Eagle (80.1%) and Horizon Air (79.0%) falling below that level. 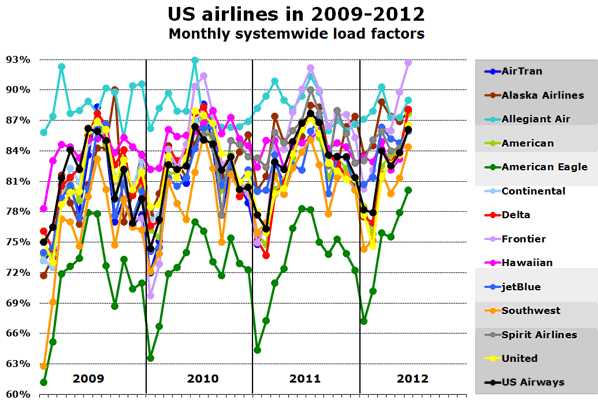