According to data from AENA in the first six months of this year Spain’s airports have seen passenger numbers fall by 4.6% to 90.15 million. Apart from the general economic difficulties across Europe, Spain also suffered the collapse of one of its leading airlines (Spanair) at the beginning of the year. Among Spain’s busiest mainland airports there are significant differences with Bilbao (+3.8%) and Barcelona (+3.5%) both reporting growth in the first half of this year, while Girona (-20.3%), Alicante (-12.1%) and Seville (-10.4%) all suffered double-digit falls in passenger numbers. The country’s busiest airport, Madrid, has seen traffic drop by 7.2%. 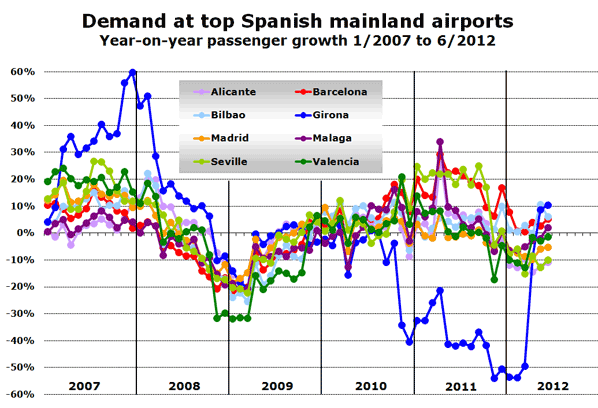 Using AENA data to identify the airline on which passengers passing through Spanish airports were travelling, reveals that over 34 million airport passengers were travelling on Ryanair flights in 2011, up over 28% on the previous year. As a result the carrier is now far and away the leading airline in the Spanish market well ahead of Iberia. Two more Spanish airlines, Vueling and Air Europa, ranked third and fourth, while Palma-centric airberlin ranked fifth. The now defunct Spanair ranked seventh last year accounting for just over 12 million passenger movements at airports. 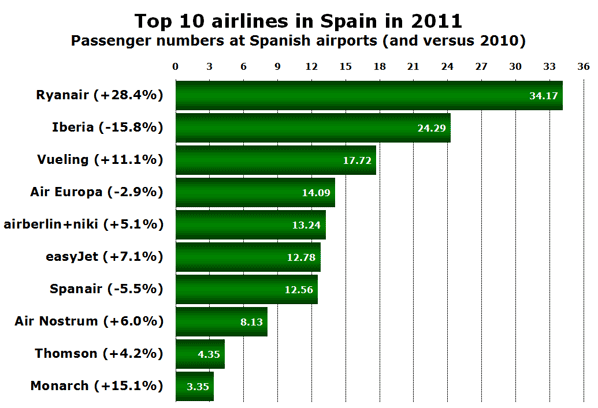 Analysis of data for June 2012 and comparing it with data from a year ago reveals that among the top 15 airlines, the fastest-growing is UK leisure airline Jet2.com which has increased its passenger numbers in the Spanish market by almost 25%, up from just over 290,000 in June 2011 to 365,000 in June 2012. 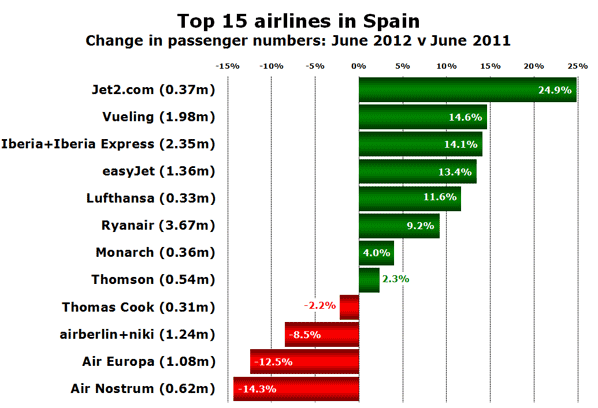 Since last summer Jet2.com has launched a range of new routes to Spain from its various UK bases. These are summarised in the following table.

easyJet, Lufthansa and Vueling have all recorded double-digit growth, while market leader Ryanair has seen its passenger numbers climb a more modest 9.2%. Iberia’s new Express subsidiary carried over 500,000 passengers in June helping Iberia to report a 14% growth in passengers at Spanish airports. At the other end of the scale airberlin (including niki) and Air Europa both carried significantly fewer people this June, while Spanair, which accounted for over one million airport passengers last June, no longer operates.