So far this year, two new Japanese low-cost airlines have launched; Peach and Jetstar Japan. Along with incumbent Skymark and next month’s start-up AirAsia Japan, Japan’s LCCs are taking a greater share of the domestic market from the two dominant carriers JAL and ANA.

Latest traffic data from Japan’s two dominant carriers (ANA and JAL) reveals that the number of passengers travelling on these two airlines on domestic Japanese routes continues to fall. In the first five months of 2012, their combined passenger numbers are around 10% down on the same period in 2010. Comparison with 2010 is more relevant as a benchmark as last year’s earthquake/tsunami heavily distorted the 2011 figures. It took until around August last year for the effects of the tsunami/earthquake to be relatively insignificant to the overall trend. 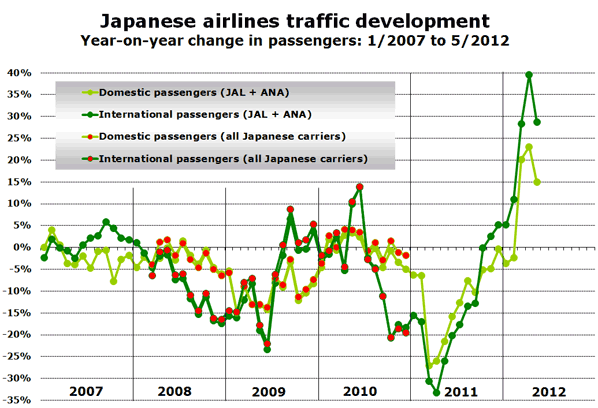 Analysis of schedule data reveals that ANA and JAL’s combined share of the domestic market appears to be falling, from over 85% last July to just under 84% this July. The launch of two new Japanese LCCs in recent months (Peach and Jetstar Japan) and another one next month (AirAsia Japan), plus the growth of established Skymark, suggests that ANA and JAL can expect to see further cuts in their own market share, although all three new LCCs are joint ventures involving either ANA or JAL.