The British regional carrier Flybe celebrates 10 years with its current name and business model. It is now offers the most domestic flights in the UK of any carrier, with Southampton as its biggest base. However, the airline is growing faster in Glasgow, Birmingham and Manchester.

UK regional carrier Flybe recently celebrated its 10th anniversary in its current guise. Having started life in 1979 as Jersey European Airways, the airline briefly operated under the name British European from 2000-2002 before evolving into its current Flybe business model, as a full-service, low-fare airline in July 2002. The airline rarely stands still for long, and after completing the takeover of BA Connect in 2007, and embracing Scottish carrier Loganair as a franchise partner in 2008, the airline completed a stock market flotation at the end of 2010 and in August 2011 completed a joint venture agreement with Finnair to acquire Finnish Commuter Airlines (Finncomm). Flybe also currently does some contract flying for Finnair as well as Brussels Airlines.

In terms of flights, Flybe (including Loganair) is now almost three times bigger in the UK domestic market than its nearest rivals, easyJet and British Airways, accounting for just over four in every 10 domestic flights. However, in terms of passengers it is much closer, with Flybe only just bigger than easyJet as both airlines handled some 5.5 million passengers on UK domestic flights in 2011.

Over seven million passengers in 2011 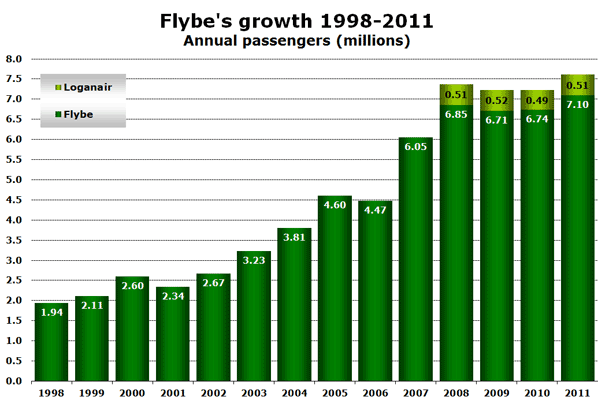 Since 2006, the average annual load factor has consistently been between 60% and 65%. So far in 2012, passenger numbers are almost identical to those achieved in the first four months of 2011, with the 3.2% increase in February explained by the extra day in 2012. 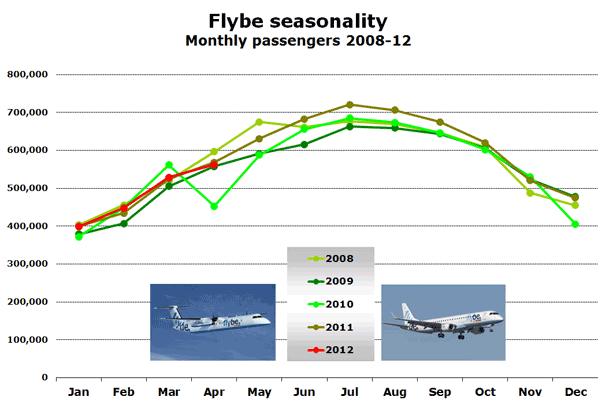 The impact of the Icelandic ash cloud in April 2010 can be seen very clearly, with some flights in May of that year also being effected.

Southampton still #1 base for seats and routes

Southampton, on the UK’s south coast, remains Flybe’s biggest operational base in terms of weekly departing seats and destinations served non-stop. Among the airline’s top 12 airports the fastest-growing in terms of weekly seat capacity compared with last July are Glasgow (+17.0%), Birmingham (+12.1%), and Manchester (+11.1%). 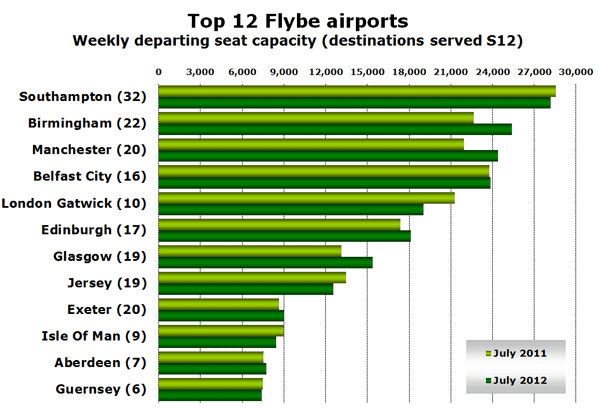 Since last year, Flybe has added three new routes from Glasgow to Donegal (in Ireland), to Leeds/Bradford and to Newquay, all three of which are operated by Loganair. Flybe’s busiest non-UK airport is Paris CDG from where it operates over 50 weekly flights to four UK destinations; Birmingham, Cardiff, Exeter and Manchester, all of which are served at least daily. Other new routes launched during the last 12 months include Dublin – Donegal (Loganair), Amsterdam – Inverness, Manchester – Knock, Exeter – Norwich (Loganair), Manchester – Newquay, Birmingham – Waterford, Newcastle – Bergen, and Leeds/Bradford – Knock.

Analysis of schedule data reveals that Flybe has also withdrawn from a number of markets during the last 12 months. These are summarised in the following table:

Analysis of Flybe’s total network (including Flybe Nordic) for this July shows that while flights are up 4.5% compared with last July, the number of seats flown are up just 1.9%, while total capacity as measured by ASKs (Available Seat Kilometres) is actually down 0.5%.

Having dropped routes from Birmingham and Manchester to Frankfurt, it has been reported that the airline’s last remaining service to that airport (from Southampton) will end at the beginning of September. Flybe’s 10th anniversary was also celebrated across the airline’s network; Belfast City, Southampton, Leeds/Bradford and Newcastle. Meanwhile, at Flybe’s headquarters in Exeter, the milestone was celebrated with cupcakes.

Taking over some former bmibaby routes this winter

Earlier this week, it was announced that Flybe would be adding four new routes this winter that were previously operated by bmibaby. From the end of October, Flybe will be serving Amsterdam from both Birmingham and East Midlands, as well as Paris CDG and Jersey from East Midlands.