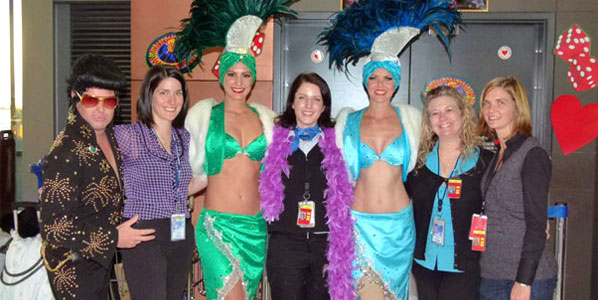 Although WestJet only operates domestic services at Ottawa now in summer, the Canadian low-cost airline offers seasonal international flights – such as Las Vegas – from the capital during winter, providing further competition to dominant Air Canada.

Like Australia and Brazil, the airport serving the capital city of Canada is not one of the country’s two biggest. Ottawa, located between the bigger and globally better-known cities of Montreal and Toronto, is home to Canada’s sixth busiest airport, which last year handled a record 4.6 million passengers, some 36% more than 10 years previously. According to the airport’s most recent annual report by 2020 the airport expects to be handling over six million passengers, and by 2025 almost seven million. In recent years, domestic traffic has consistently accounted for 74% of total traffic, a further 16% on transborder routes to and from the US, and the remaining 10% on other international routes. 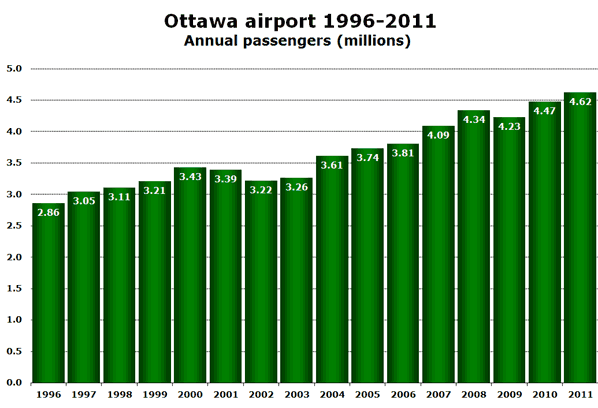 Not being a high-profile leisure destination, Ottawa’s seasonality profile is relatively flat, suggesting that business traffic dominates at the airport. In winter, there are a range of seasonal charter flights to take shivering Canadians somewhere warmer, such as Florida and a range of destinations in the Caribbean. 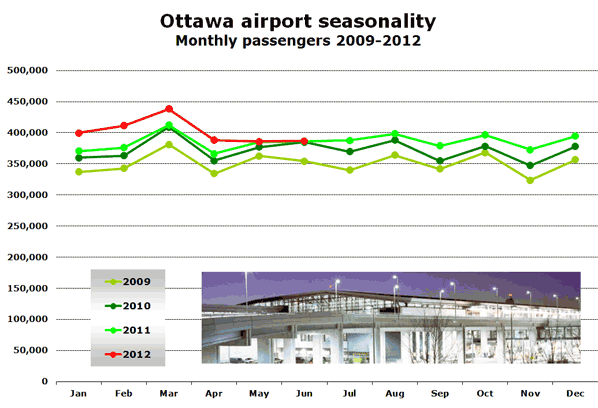 Traffic in the first half of 2012 is up a promising 5% compared with 2011, although in the last two months, passenger growth has been less than 1%.

National carrier Air Canada accounts for just under 53% of scheduled seat capacity this summer, serving a total of 20 destinations non-stop, including five outside of Canada. It serves Boston, New York (La Guardia), and Washington (National) in the US as well as operating daily transatlantic flights to Frankfurt and London. 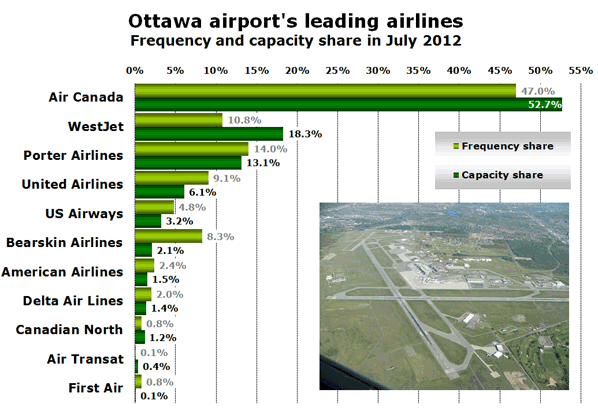 On all leading domestic routes, Air Canada faces competition from either WestJet, Porter Airlines, or in the case of Montreal, Bearskin Airlines. Toronto Pearson is by far the leading route, and if Porter’s flights to Toronto City airport are added in, Toronto becomes even more dominant as the number one generator of traffic. 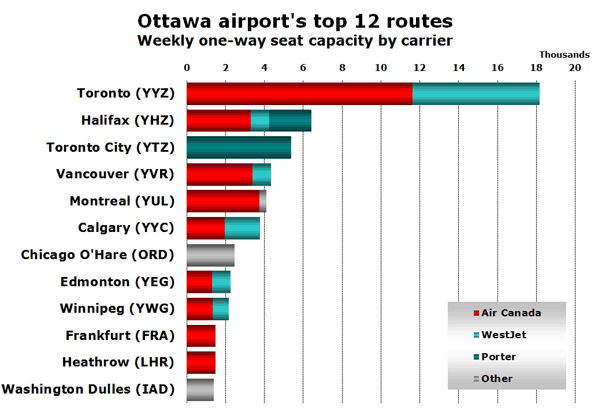 The two US destinations that make the top 12, Chicago and Washington Dulles, are only served by US carriers. However, Air Canada’s fellow Star Alliance partner United operates on both of these routes, and Air Canada does offer flights to Washington National. The transatlantic services to the UK and Germany are served by Air Canada, although Air Transat also offers seasonal flights to London Gatwick.