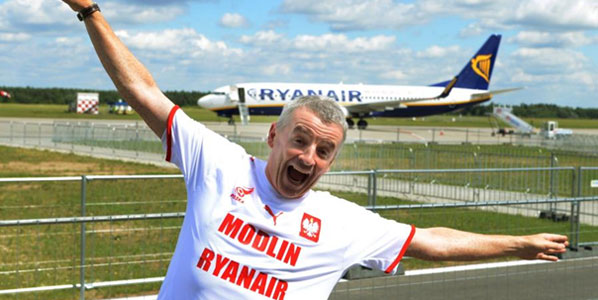 As Ryanair boosts its Polish schedules by 70% compared with last year, much thanks to the new Wroclaw base and Warsaw Modlin operations, CEO Michael O’Leary can celebrate leading Poland’s biggest international airline with more than a quarter of all international seat capacity.

Note: Since this article was first published, OLT Express has suspended operations. For information on the latest developments, see the added details at the bottom of this article.

Having experienced a boom in air traffic as the country joined the EU in 2004, Poland again sees remarkable growth at its airports, as major expansions take place on several fronts. In 2009, Poland was the only EU nation to report GDP growth and during such uncertain times in Europe’s economy, the only European Union member country not to have experienced recession appears to be seen as a safe haven for airlines. 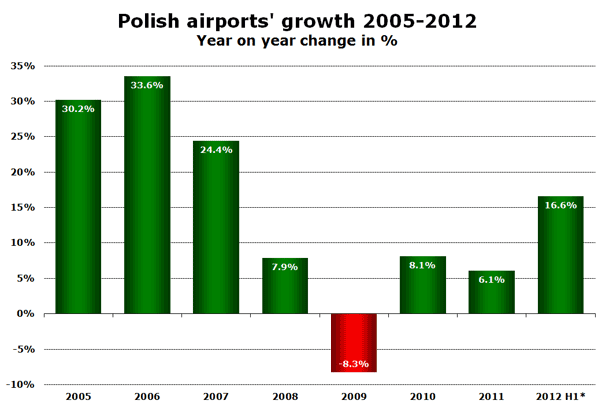 Although Polish airports’ traffic growth has slowed down since the record-growth experienced after the country’s EU entry and airports overall reported negative figures during the global economic downturn in 2009, passenger numbers have bounced back and figures for the first half of 2012 are remarkably strong, up an astonishing (by European standards) 17%.

Eager to reap benefits in the growing market, Emirates recently announced daily Warsaw flights from February 2013, a surprisingly late entry by the first MEB3 carrier to the underserved Polish long-haul market. Only seven other EU capitals (Helsinki, Tallinn, Riga, Vilnius, Bratislava, Ljubljana and Luxembourg) now lack MEB3 services; all of which serve smaller markets. Poland’s only eastward long-haul route is currently LOT Polish Airlines’ three weekly Beijing flights from its Warsaw hub, a route that was launched at the end of May.

Notably, after Poland was selected in 2007 to co-host the recent EURO 2012 football tournament, investment in airport infrastructure was stepped up. In addition to large-scale projects at all existing airports, two brand new airport facilities were built from scratch; Warsaw Modlin, the capital’s low-cost airport that opened last week, while Lublin Airport in the east of the country is scheduled to open in time for the winter season. 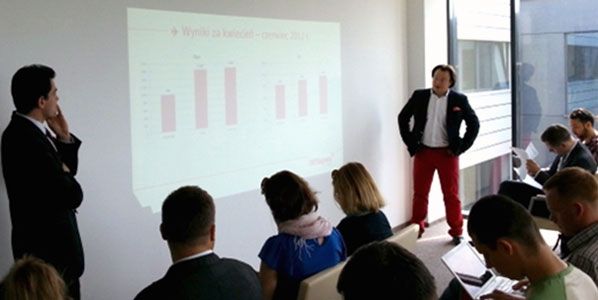 Jarosław Frankowski, Managing Director OLT Express, yesterday held a press conference in Warsaw, announcing the reduction in the airline’s domestic network due to the removal of ATR aircraft from its fleet. State-owned eurolot, which downsized domestically earlier this year due to competition from the new airline, has already made public that it is evaluating several of the competitor’s dropped routes. (Thanks to Fly4Free.pl for the picture)

The domestic market was shaken up by the arrival of OLT Express earlier this year, which launched a considerable domestic network, enabling non-stop travel between a number of regional cities previously unconnected by air. However, the airline announced yesterday (25 July) that it will withdraw all 11 ATR aircraft from its fleet within three weeks’ time, with the consequence that nine of its domestic routes will be dropped, while frequencies are reduced on an additional two routes. However, as of today (26 July), all of OLT Express’ ATR flights are cancelled. Still, the carrier has made no mention of changes to the previously announced international expansion for the coming winter season. In a pre-emptive move, eurolot, which lost considerable traffic as a result of domestic competition from OLT Express, has also launched international services from regional airports. 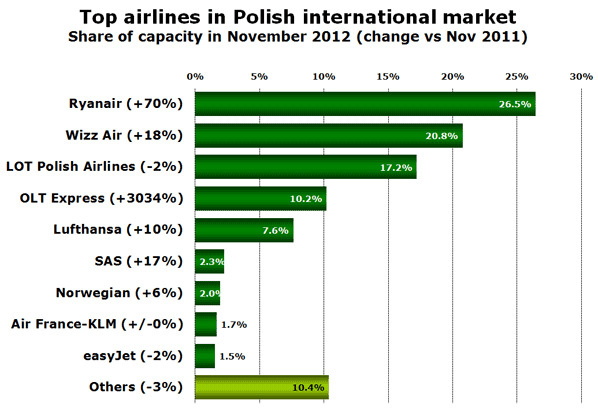 Ryanair will be the biggest airline operating international flights to and from Poland at the start of this coming winter scheduling season. The airline, in spite of only having one operational base in the country, has over a quarter of the country’s international seat capacity. The opening of the Wroclaw base in March this year, as well as launching operations to Warsaw Modlin last week, contribute to the airline having increased its presence in Poland by 70% on last year. The Irish low-cost airline is followed by three further airlines with Polish bases; fellow low-cost airline Wizz Air, the flag carrier LOT Polish Airlines and the newcomer OLT Express.

However, while LOT Polish Airlines awaits its first 787s, its two Star Alliance partners Lufthansa and SAS are biting into the Polish national carrier’s connecting catchment in the regions. Lufthansa has launched flights from Düsseldorf to both Krakow and Poznan at the start of the current summer season and a further four of Lufthansa’s Polish routes have seen as much as double-digit percentage capacity growth, including the Frankfurt-Warsaw trunk route. Meanwhile, SAS is also adding new routes to Polish regional airports from its Copenhagen hub. Flights to Wroclaw were added last year, while Katowice services launched at the start of this summer season. Lodz will become SAS’ sixth Polish destination from Copenhagen at the start of the winter scheduling season. 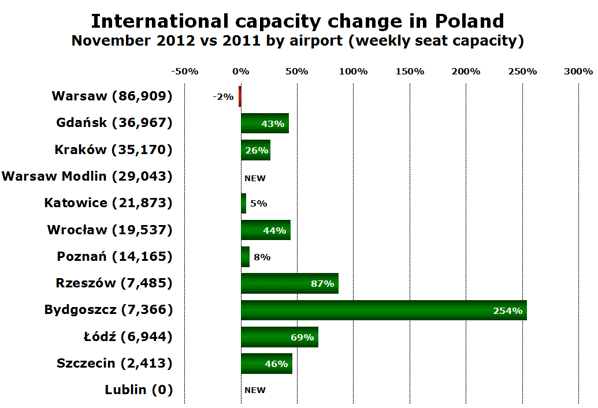 Even for Poland’s biggest regional airports, Gdansk and Krakow, the recent network developments are so considerable that the airports’ international capacity are growing by 43% and 26% respectively on last year’s figures. Warsaw Modlin, which only opened last week, will this winter season already have become the country’s fourth-largest airport for international traffic in terms of seat capacity offered. Poland’s other new airport, in Lublin, will, however, not yet have any scheduled commercial services in November. Wizz Air’s two announced routes from Lublin, to London Luton and Oslo Torp, are scheduled to launch in December and January respectively. 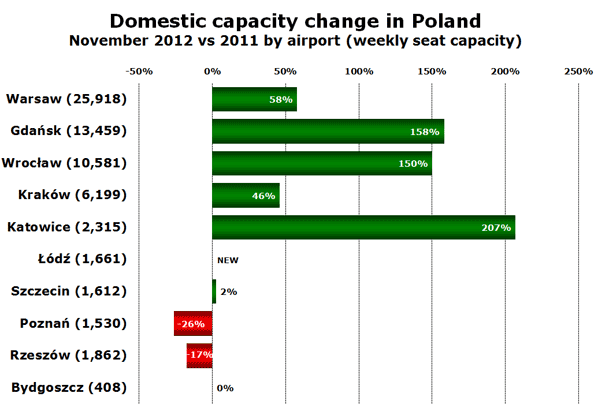 The most remarkable growth is, however, to be seen in the Polish domestic market where domestic seat capacity has more than doubled at Gdansk and Wroclaw, and trebled in Katowice. Only the airports that last year had limited domestic traffic (Poznan and Rzeszow) will see a reduction in November, according to the current schedule. However, after OLT Express’ reduction plans were announced yesterday, eurolot has indicated that the airline is planning to reinstate some of the dropped routes, meaning that this situation may soon change.

In Lodz, domestic traffic is even new to the airport when compared with last year, as the airport had not had scheduled operations within Poland since March 2010 when OLT Express launched services from Gdansk and Wroclaw in April this year.

The question remains if the intense competition in the Polish domestic market is sustainable. OLT Express has already announced its intentions to scale down its initial, ambitious plans and the airline’s financial situation may lead to further reductions – also to the international network announced. This could either slow down the growth of the Polish market – or create opportunities for other carriers to fill the void.

Following the publication of this article, the developments surrounding OLT Express have continued at a fast pace. Yesterday, Thursday, all leased turboprop aircraft were called back by the lessors, leading to an instant cancellation of all ATR-operated routes. The suspension of all flights, including Airbus-operated routes, was announced later in the evening.

Speaking in Warsaw today, Jarosław Frankowski, OLT Express’ Managing Director, announced that OLT Express Regional (turboprop fleet) will file for bankruptcy today, but OLT Express Poland (Airbus A319/320) will continue to operate charter flights. Lack of liquidity was pointed out as the main cause of the situation, and the airline is said to have seen banks’ requirements on the airline’s minimum cash reserve rise 25-fold because of non-transparent funding. This was also reason for the Polish CAA to revoke OLT Express Regional’s AOC earlier today. Frankowski said: “OLT Express Poland’s return to the scheduled market, including international services, is not impossible, but will depend on the airline’s ability to raise funds from charter operations or externally.” The company’s outstanding commitments are estimated at 30 million Polish zlotys (€7 million).

Both eurolot and LOT Polish Airlines are likely to benefit from OLT Express’ sudden rise and fall. The CEO of the former, Mariusz Dąbrowski, pleadged that eurolot was evaluating the commercial viablity of dropped domestic routes, in particular those from Poznań.