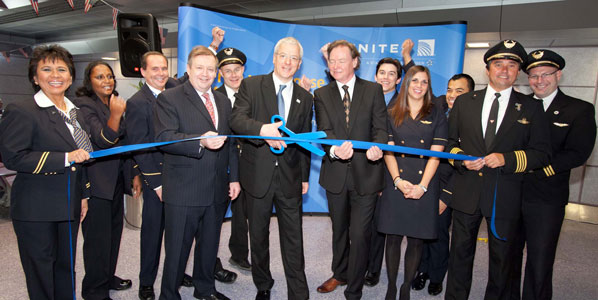 In the first six months of the year, the United States is the country market to have grown by the largest number of passengers out of UK airports. A contributor is United’s new route between Washington Dulles and Manchester – the airline’s second service to the northern England airport – which launched at the beginning of May.

Analysis of data from the UK Civil Aviation Authority shows that passenger numbers on international routes from UK airports were up 1.3% in the period January to June 2012, compared with the first half of 2011. As usual, this modest growth disguises a range of individual country market performances. If volume growth rather than percentage growth is analysed then the United States leads the way with an additional 300,000 passengers travelling between the UK and US destinations, representing growth of 4.0%. Four other country markets achieved volume growth of more than 100,000 passengers, with Italy, Netherlands, Lithuania and Poland following the US. 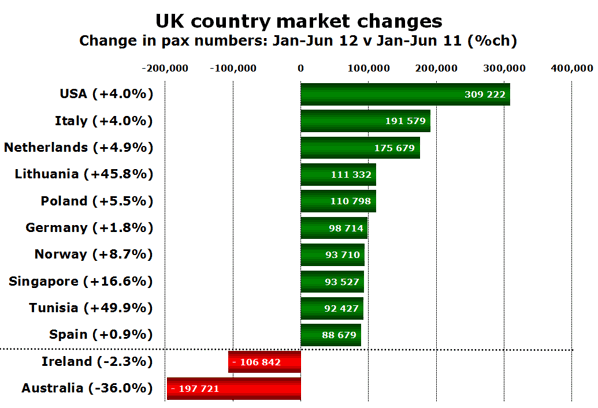 Another market showing significant growth was Tunisia (up almost 50%), although this can be explained easily by the fact that the country experienced some social upheaval as part of the Arab Spring in 2011 which deterred holidaymakers for a while.

These are passengers carried on one flight number, where the aircraft is the same throughout the duration of the flight number. For multi sector services (within a flight number) we attempt wherever possible to obtain a breakdown of passengers travelling to/from each point, where this is not available we allocate all passengers to the origin/destination (the first/final point on the route).

The UK to Australia traffic started to decline significantly from March onwards. This corresponds with when British Airways stopped operating its Heathrow-Bangkok-Sydney service. From 4 March, this service terminated in Bangkok from where passengers could transfer to a Qantas flight if desired. At the same time, BA upgauged its Heathrow-Singapore-Sydney service from a 777 to a larger 747-400. Also, from 25 March, Qantas stopped operating their daily flights from Bangkok and Hong Kong to London, while maintaining their double-daily flights from Singapore.

In other words, given that many passengers travelling between the UK and Australia also use carriers such as Cathay Pacific, Singapore Airlines, Emirates, Etihad and Qatar Airways (involving a change of aircraft and flight number), the UK CAA figures do not, in this case, provide an accurate reflection of the demand for air travel between the two countries.