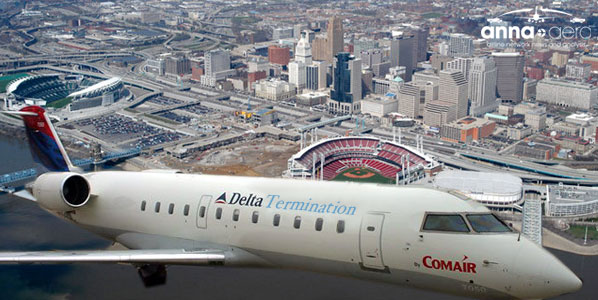 At anna.aero we're always sorry to lose an airline friend. But by adding more mainline flying Delta says there are no planned reductions in the number of flights (especially at its Cincinnati base, pictured) as a result of closing its wholly-owed subsidiary.

On 27 July, Delta Air Lines announced that it would be closing its wholly-owned subsidiary Comair, with the airline operating its last flight on 29 September 2012. Comair was founded back in 1977 and first operated flights for Delta in 1984. Delta made an initial investment in the carrier in 1986 before acquiring full ownership in 1999. According to anna.aero’s analysis of Innovata data for July 2012, Comair operates on 114 airport-pairs for Delta, involving 58 airports. The airline’s fleet currently comprises around 50 Bombardier regional jets from CRJ100s to CRJ900s.

Cincinnati and Detroit are biggest bases 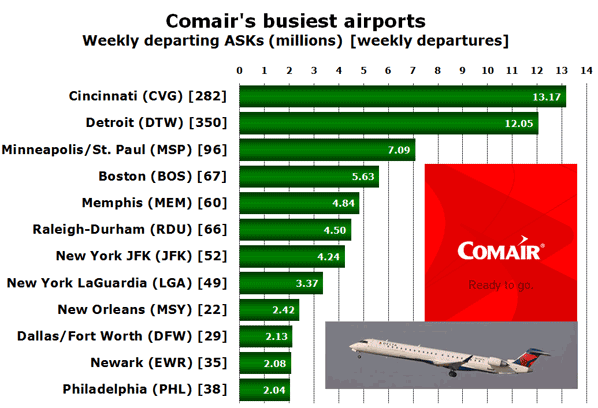 In terms of weekly frequencies, the leading routes operated by Comair are shown in the following graph. All but one of the top 12 routes involves either Cincinnati or Detroit the exception being third ranked Boston to Raleigh-Durham 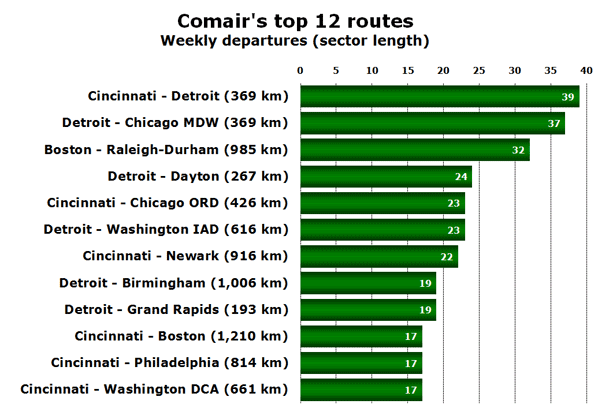 Delta: “no significant change to network”

Don Bornhorst, Senior Vice President of Delta Connection said: “While regional flying has and will remain a key component of Delta’s network, customer expectations and the unit costs of regional flying have evolved. In response, Delta recently announced its plans to reduce the total number of regional jets in its network while adding more mainline flying. This includes reducing the number of 50-seat regional jets from nearly 350 aircraft to 125 or fewer in the upcoming years. As a result of this reduction and changes to its customer-focused business strategy, Delta has made the difficult decision to cease Comair’s operations.”

According to Delta, “The discontinuation of Comair’s operations will not result in any significant changes to Delta’s network, which has enough flexibility to accommodate these changes. Currently, Comair accounts for approximately one percent of Delta’s network capacity. There will be no disruption to customers and no significant adjustments to Delta’s flight schedule or locations served.  All customers who travel on the Delta network, whether on Delta Connection flights or mainline aircraft, can continue to make travel plans with Delta as they have in the past. Cincinnati will continue to be an important market in Delta’s worldwide network. Over the past several years, working with community leaders, Delta has right-sized capacity at Cincinnati to better match service to local passenger demand. Cincinnati is now a profitable market for Delta and the city continues to enjoy over 120 peak daily flights, with non-stop service to 49 destinations. No reductions in the number of Delta flights are planned at Cincinnati as a result of this decision.”