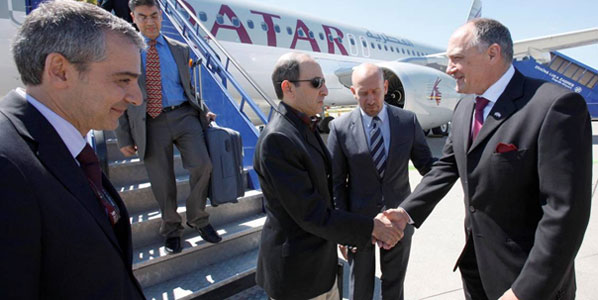 May 9: Qatar Airways’ CEO Akbar Al Baker steps off the plane to a welcome handshake from Zagreb Airport’s CEO Tonci Peovic. The new daily service to Doha is via Budapest; astonsingly there are not yet any non-stop flights from any the major Middle Eastern hubs (or anywhere in the US, Asia). anna.aero wonders how long can this gap can last, given the buoyancy of low cost routes from Northern Europe and the outstanding quality of Croatian tourist resorts such as Dubronik and Split.

Croatia, although not yet a member of the European Union, has seen significant passenger growth at many of its airports in recent years, thanks to the development of low-cost airline services from western and northern Europe. Traffic across the country’s five main airports doubled between 2002 and 2008 from 2.5 million passengers to five million. Although passenger numbers declined by 6% in 2009, they rose once more in 2010 (by 7%) and 2011 (by 9%), to a new high of 5.6 million. 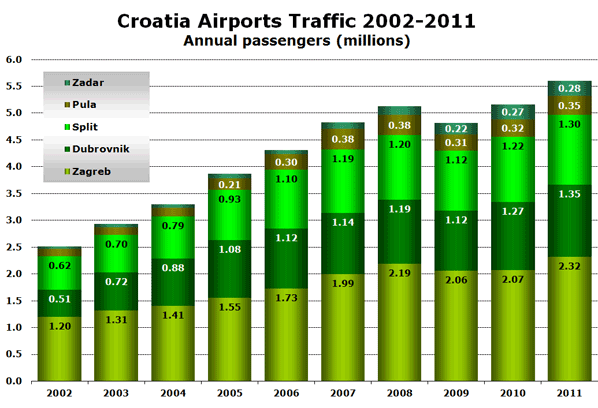 So far in 2012, traffic appears to be growing once more with the latest data for June showing that passenger numbers are up significantly in Dubrovnik (+13.7%), Pula (+16.3%), Split (+20.3%) and Zadar (+27.3%). Given that traffic is very seasonal at these airports, June figures are much more representative of traffic for the year as a whole than data in previous months.

Last year, Croatia Airlines carried just over 1.83 million scheduled passengers, which was up 14.8% (Source: AEA) at a load factor of 67.1% (up 5.2 percentage points). This summer, the airline is operating 50 international scheduled routes (18 from Zagreb, 14 from Split, 11 from Dubrovnik, four from Zadar, two from Rijeka and one from Pula). It also has a monopoly on the country’s domestic air services, operating nine domestic routes, the main ones being Zagreb – Dubrovnik, and Zagreb – Split, both of which are served at least four times daily. Its fleet currently comprises three A320s, four A319s and six Q400s (Source: Croatia Airlines’ website). According to Airbus, the airline is still awaiting delivery of a further four A319s. 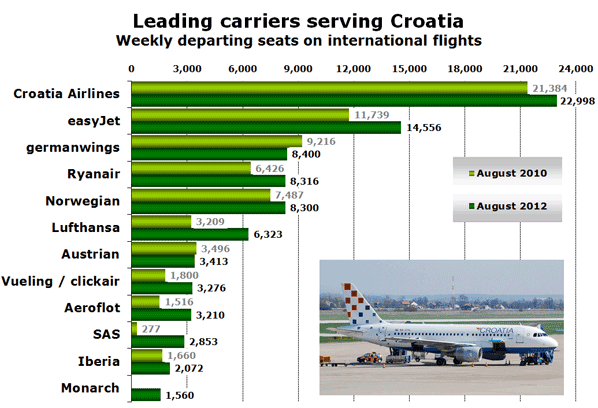 A comparison of scheduled seat capacity between August 2010 and August 2012 shows how low-cost carriers are developing an increasing presence in the country. easyJet is now in a clear second place with germanwings, Norwegian and Ryanair scrapping over third place. Lufthansa has moved into fifth place having increased its range of routes from six to 15, and the number of weekly flights from 33 to 60. Another Star Alliance carrier, SAS, has gone from two routes in August 2010 to nine routes this summer. By starting scheduled flights this summer from Birmingham, London Gatwick and Manchester to Dubrovnik, Monarch has jumped straight into 12th spot.

A total of 50 airlines offer scheduled service to and from Croatia this summer including flag carriers such as Aer Lingus, Air France, British Airways, El Al, Finnair, TAP Portugal and Tarom; LCCs such as Jet2.com, SmartWings, Transavia.com, Volotea and Wizz Air; and other carriers including airberlin, Blue1, DanubeWings, Flybe, Intersky, S7, Sky Work, and Transaero.

Just two country markets, Germany and the UK, account for almost 40% of scheduled seat capacity (down from almost 45% in August 2010) during the peak summer month of August. 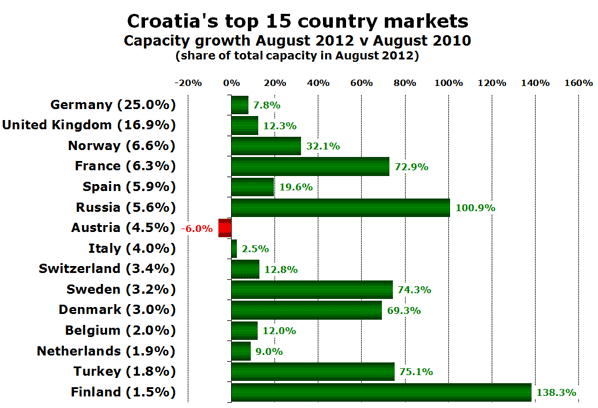 The fastest growth has come from some of the smaller country markets such as Denmark, Finland, Sweden and Turkey, but the growth in the French and Russian markets is particularly notable. France has gone from seven routes in August 2010 to 15 this August with Transavia.com and Ryanair both entering this market. Finland has benefited from the launch of three new services; Helsinki to Dubrovnik (Finnair on 2 April 2012), Helsinki to Pula (Blue1 in May 2011) and Helsinki to Split (Norwegian in May 2011).

A total of 31 countries are served non-stop from Croatian airports, all of which can be considered as European (if you use the Eurovision Song Contest definition of Europe which includes Israel). There are no non-stop flights to anywhere in the US, Asia or even any of the major Middle Eastern hubs, although Qatar Airways launched daily flights to Doha via Budapest on 9 May. It is possible that the service may be operated non-stop in the future.