easyJet’s biggest base at London Gatwick has 50 aircraft and almost 100 routes; Spain remains #1 market in summer 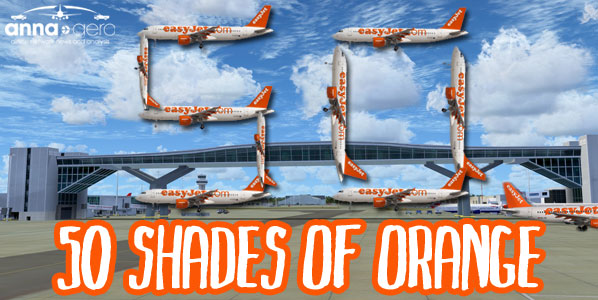 Now a base of 50 planes: This summer easyJet operates over 1,050 weekly departures from London Gatwick to 90 destinations in 23 countries – 8% more capacity than last year. It will add four new routes this winter – the Isle Of Man, Luxembourg, Tallinn and Turin.

Considering that London Gatwick has long been recognised as the world’s busiest single runway airport, the fact that easyJet has managed in the space of less than 10 years to become the airport’s leading airline (overhauling British Airways some years ago) is an impressive achievement. Last week saw the airline receive its 50th aircraft that will be based at the airport south of London.

Although the airline’s first route at the airport was back in 1999 (to Geneva), a second route (Amsterdam) only started in 2001 and by the end of that year easyJet was still only operating three routes from the airport. However, since 2002 the airline has grown rapidly taking advantage of the downsizing of British Airways’ (BA) operations at the airport, and helped in 2008 by the acquisition of GB Airways, a former BA franchise carrier. 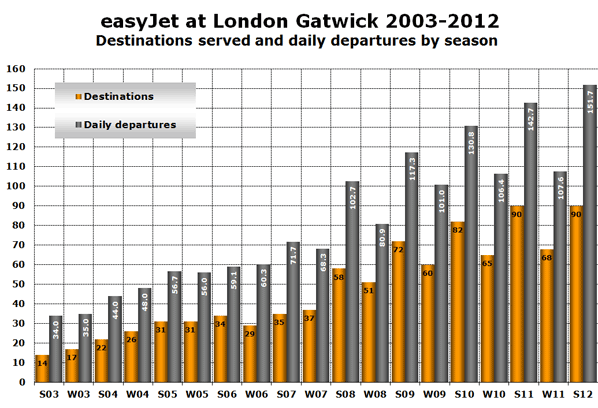 Acquiring so many seasonal, leisure routes from GB Airways in 2008 increased the seasonality of easyJet’s business at the airport which can now be clearly seen. Last winter, the airline operated around 25% fewer flights than during the previous summer and this seasonality gap looks set to widen.

In total, anna.aero estimates that easyJet has, at one time or other, operated 103 routes from London Gatwick with four more (Isle of Man, Luxembourg, Tallinn and Turin) scheduled to start this winter. However, during that time it has also discontinued flights to Bilbao, Bucharest, Cork, Gdansk, Gothenburg, Helsinki, Istanbul, Knock, and Shannon. As a result, the airline is left tantalisingly close to operating 100 routes from Gatwick at the present time.

A chronological list of all new routes started by easyJet at London Gatwick is provided in the following table.

This summer easyJet will be operating over 1,050 weekly departures from London Gatwick to 90 destinations in 23 countries. This is up around 8% on last summer when the airline also served 90 destinations in 24 countries. However, since last summer, the airline has added Bari (Italy), Fuerteventura (Spain) and Kefalonia (Greece), but dropped Gothenburg (Sweden), Istanbul (Turkey) and (just for July and August) Luxor (Egypt). 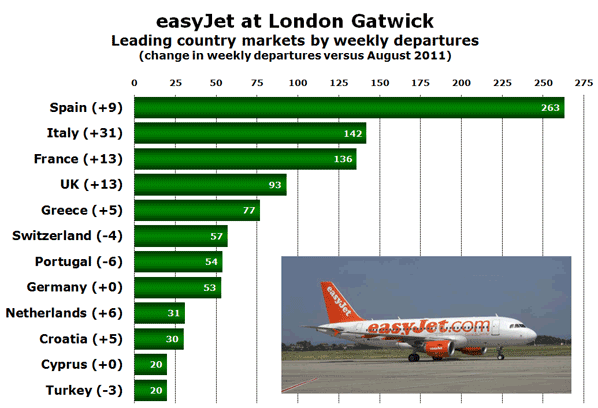 In terms of leading country markets, Spain remains the best served with over 250 weekly departures, well ahead of Italy, France and the UK. In percentage terms, Italy sees the biggest increase over last summer with almost 28% more flights including the new Bari route. Milan Malpensa and Venice are both served with an extra daily flight while Milan Linate, Pisa and Rome Fiumicino each benefit from an extra 3-4 extra weekly flights.