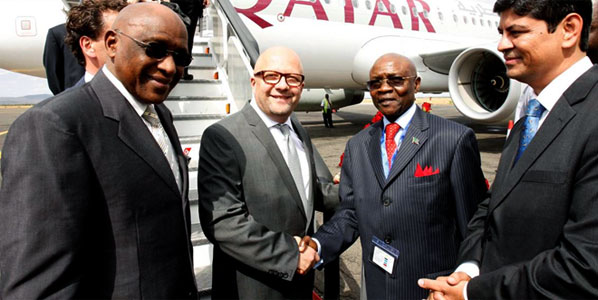 The Gulf carriers (the ‘MEB3’) and Turkish Airlines are on a clear expansion course in Sub-Saharan Africa, while Europe’s big airlines seem to rearrange their networks to the African continent. Qatar Airways’ latest African destination is Kilimanjaro where it takes on KLM, which serves the Tanzanian airport from Amsterdam.

As many of Europe’s economies are experiencing challenging times, it could be expected that the region’s big airline groups to a greater extent would turn to high-yield markets such as those in Sub-Saharan Africa that for long have been characterised by limited competition and in many cases weak competition from local African carriers.

However, anna.aero’s analysis shows that Europe’s three big airline groups have made little change in overall capacity to Sub-Saharan Africa in the last year. The airlines have instead made considerable changes within their African networks and clear shifts in African network strategy can be seen between the individual airlines within each group.

The group with the largest presence in Sub-Sahran Africa is Air France-KLM. Both of the group’s airlines have made considerable changes to their African networks in the last year. KLM has added new routes to Luanda and Lusaka, but the airlines have also made several cut-backs. For example, both airlines have downsized aircraft, reducing capacity considerably, on their routes to Lagos in Nigeria. Further examples include Air France’s capacity to N’Djamena in Chad being cut by a third, but this reduction is nearly compensated for by the four additional flights a week to Lomé in Togo. There has also been internal move, with KLM dropping its Abuja flights in favour of its parent Air France’s new service to the Nigerian capital.

In Lufthansa Group, the biggest reduction has been in Swiss’ network because of the airline dropping its Douala route, but, in real terms, Brussels Airlines’ strong capacity boost in the African market more than compensates for the Swiss sister airline’s reduction. However, in spite of the airline trebling capacity to Khartoum, Lufthansa has also reduced overall, much because of its dropped non-stop operation to Addis Ababa and 40% capacity drop to Accra. Lufthansa now offers similar capacity to Sub-Saharan Africa as Brussels Airlines, which is continuing to grow strongly in its key African market.

While British Airways has made minor capacity increases to Entebbe and Johannesburg, the airline has cut capacity to Dar Es Salaam and Luanda by 25% and 10% respectively. Meanwhile, its sister carrier Iberia has increased its Sub-Saharan capacity considerably, having launched new routes to Luanda, Accra and Nouakchott. Notably, now defunct Spanair was increasing its presence in the market between Spain and Africa prior to its demise. Iberia is also boosting services to Lagos by 30% and Dakar by 15%; however, the airline dropped its Johannesburg route in April. Iberia’s overall impact on IAG’s capacity to Sub-Saharan Africa is, however, so limited that the airline group’s growth in the market is only 2%.

The airlines to see the most opportunities in growing their networks to Sub-Saharan Africa rather seem to be the more dynamic ‘new’ airlines in the Persian Gulf (that we at anna.aero refer to as the MEB3 – the Middle East Big 3) as well as Europe’s upcomer Turkish Airlines, which shares many traits with these carriers. These airlines’ geographical location also make them suitable for attracting traffic both from Europe and Asia, of which the latter region is known for generating a particularly strong growth in demand for Africa.

These airlines’ combined capacity to Sub-Saharan Africa has grown at such fast pace that it now amounts nearly 80% of the capacity offered to the region by the three big European airline groups above. 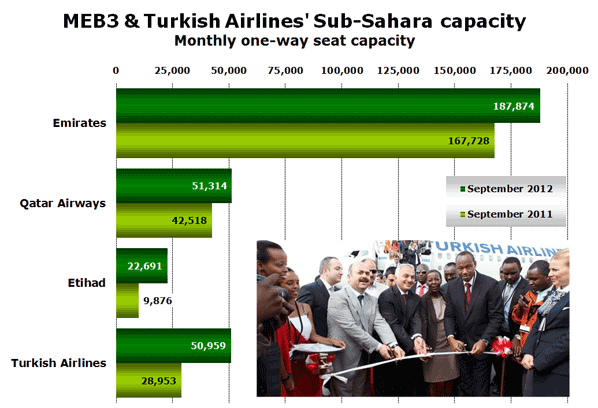 Etihad has more than doubled its capacity to Africa in the last year, having introduced new services to Lagos, Nairobi and the Seychelles; however, the airline grows from a low capacity level last year. The biggest growth in absolute terms comes from Turkish Airlines, which has launched new non-stop flights to Accra, Dar Es Salaam, Kinshasa and Kigali. Meanwhile, Entebbe has been lost as a non-stop destination from Istanbul Atatürk, since the airline now serves the Ugandan capital via Tanzania’s capital Dar Es Salaam. Turkish Airlines has also boosted its operations to Khartoum, Lagos and Johannesburg by 30-40%, only reducing Nairobi capacity by 20%.

Emirates, which already is the biggest of the MEB3s and Turkish Airlines in the African market, has made greater adjustments to its existing network. Although the airline has launched two new routes, to Entebbe and Lusaka, considerable boosts also come from capacity increases to Durban (+55%) and Khartoum (+70%). Meanwhile, Emirates has halved capacity to Cape Town as frequencies have reduced from twice-daily to daily.

Ambitious Qatar Airways is also growing the Sub-Saharan market, although with less capacity than the other compared airlines. The airline has introduced new flights to Entebbe and doubled its capacity to Dar Es Salaam with the launch of stopping services to Kilimanjaro last week. The airline also planned to introduce flights to Mombasa later this month, but these plans now seem to have been abandoned.

In conclusion, the MEB3 and Turkish Airlines are on a much clearer expansion course in Sub-Saharan Africa where governments seem to embrace the successful airlines, while Europe’s large airline groups seem to prove being less reliable partners to the African airports and governments, as the airlines carefully reshift their networks at both ends – both between the groups’ European hubs and between African destinations.