Peru traffic grows 12% in first half 2012; domestic capacity up 20% in November, but LAN still dominates 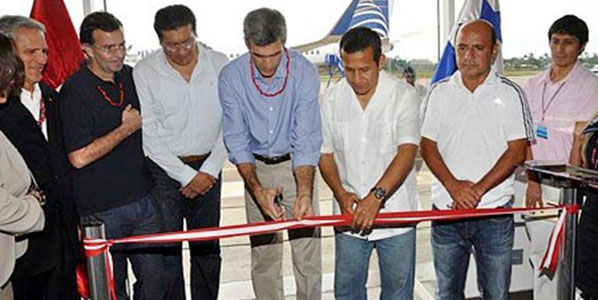 Copa’s service from Panama City to Iquitos, which recently was awarded an anna.aero Route of the Week, is one of only two international routes in Peru not to involve Lima.

Although it might not necessarily be obvious given the stiff competition in the region, Peru is said to have one of South America’s most resilient economies and was recently pronounced the new economic tiger by Wall Street Journal. Since anna.aero last looked at Peruvian market in February 2011, the country’s aviation market has continued to flourish at a double-digit rate, and in the first five months of 2012 achieved passenger growth of 11.7% on the corresponding period last year. 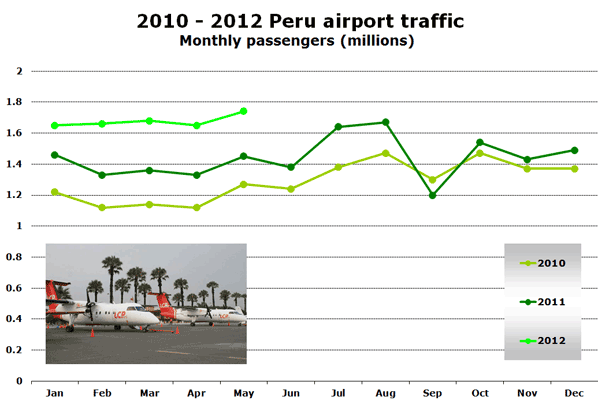 The airport serving the country capital Lima continues to dominate the market, as it concentrates almost 64% of all seat capacity, including virtually all international services. 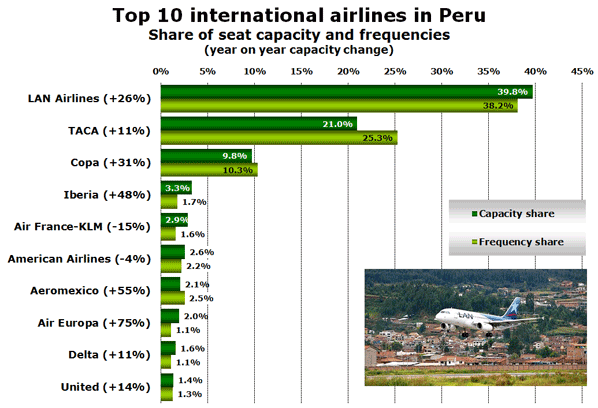 LAN Airlines, Avianca-TACA and Copa make up for around 70% of international capacity in November. No other airline has more than 4% capacity share in the international market from Peru. New routes launched on these airlines between November last year and this year from Lima include Cancún, Mexico City and Havana (LAN Airlines), Cali and Medellín (Avianca-Taca), while Iquitos has a new connection from Panama City (Copa Airlines).

Notably, the two Spanish carriers Air Europa and Iberia have both increased their presence in the country by adding additional frequencies between Madrid and Lima, while Air France-KLM’s offering diminished due to capacity reductions from Paris CDG.

Copa’s service from Iquitos to Panama City, which was named anna.aero Route of the Week recently, and Sky Airline’s four-weekly flights from Arequipa to Arica in Chile, are notably the only two international services offered from Peruvian airports other than the capital. A third route, Aerosur’s link from La Paz in Bolivia to Cusco, was lost when the airline ceased operations earlier this year.

At over 35,000 weekly seats, the US remain the largest international market, although at 3.5% year on year capacity growth, it seems to be slowing down if compared with 8.5% yearly change in 2010. Except for the loss of United-Continental services to Newark, the remainder of the reduction comes from equipment adjustments rather than network changes. Notably, Ecuador is now the fourth-largest international country market, having outgrown both Spain and, perhaps more surprisingly, Brazil.

A total of five airlines currently operate domestic services in Peru. Innovata data for November shows that all except for Star Peru, which contracted its weekly seat offering by 8%, will grow their capacity by at least 20%. Notably, in spite of LC Perú and Peruvian Airlines increasing their respective capacities by 70% and 32%, the three regional carriers combined (LC Perú, Peruvian Airlines and Star Peru) only provide the equivalent of 33% of the capacity offered by LAN Airlines and TACA, which hold respective domestic market shares of 62% and 14%. Notably, TACA almost tripled its presence in the domestic market over the last two years. 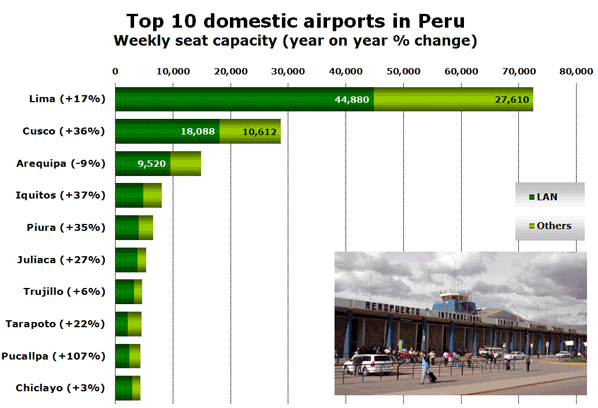 Closer examination of the 20% year on year domestic capacity increase in November shows that much of the growth is attracted at regional airports. However, Fraport-managed Lima still expanded by a solid 17% and attains 43% of domestic capacity. The only other airport to achieve market share of more than 10% is Cusco, while Arequipa, Peru’s third-largest airport, is the only airport to contract, as it lost almost 9% of domestic capacity compared with November last year.