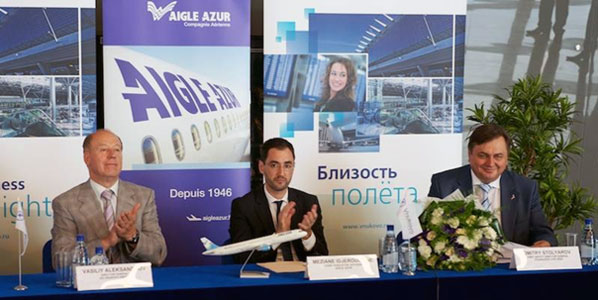 As Russia liberalised its bilateral with France, Transaero and its French code-share partner Aigle Azur have become the latest carriers in the Moscow-Paris market. Transaero now has 40% of its international seat capacity to EU markets after growing by 85% in the last year.

Although Russian carriers’ international expansion is limited by the often very restrictive bilateral agreements Russia has with other countries, fast-growing Transaero has recently had some success in expanding its European network as Russia’s air services agreements with both Italy and France have liberalised and Transaero has been named designated carrier, which has led to several routes to Italy launching a month ago and services to Paris last week.

As a consequence, Transaero’s seat capacity to EU countries is up by 85% this August when compared to the corresponding month last year. This means that the EU market now stands for 39% of the airline’s total international seat capacity, compared with a 26% share a year ago. 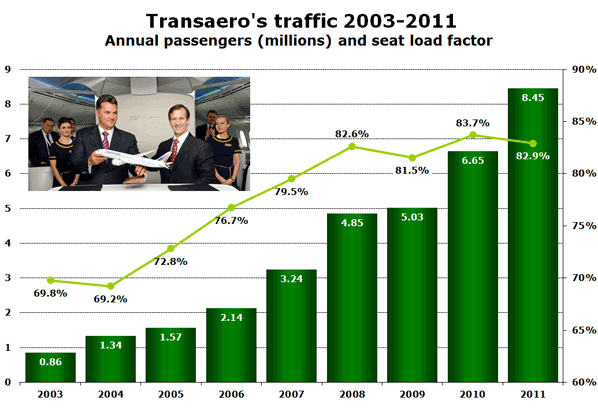 In spite of bilateral limitations, Transaero’s growth has been remarkable. In both 2007 and 2008, the annual passenger growth reached 50% and, after the slowdown caused by the worldwide economic downturn in 2009, Transaero has still achieved remarkable annual growth of around 30%. In the meantime, load factors have stabilised and Transaero has achieved healthy 83-84% the last two years.

The growing trend continues this year and passenger numbers in the first five months of 2012 are up 28%. Notably, Transaero’s traffic is highly seasonal, with passenger numbers reported in August three times as high as those in February.

Transaero has grown its domestic network particularly rapidly in the last year; +45% in terms of seat capacity. Domestic traffic now makes up 67% of the airline’s total; however, Transaero still only ranks as Russia’s fourth-largest domestic carrier at 7.6% of the market measured by seat capacity, well after Aeroflot (17.5%), UTair (16.0%) and S7 (15.8%), but ahead of Rossiya (6.2%). In terms of the size of the airline’s domestic route network, Transaero is even further down the list, ranking sixth in terms of the number of destinations served, marginally beaten by Yakutia and RusLine. This discrepancy is caused by the airline using larger than average aircraft on its domestic routes. The airline for example specialises in widebody services to the Russian Far East. 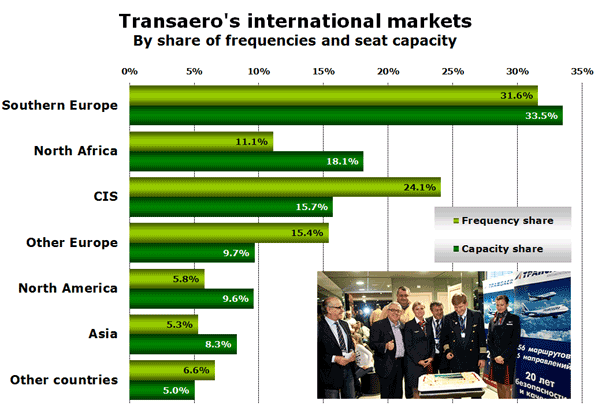 Although countries in Southern Europe (Spain, Greece, Cyprus, Italy, Turkey and Croatia) make up the largest group of country markets served by Transaero in August, the airline’s single-largest market by international seat capacity is Egypt, which dominates the airline’s North Africa traffic at over 10,000 weekly seats in each direction.

Serves all three Moscow airports; 787s and A380s on order

Since anna.aero last analysed the airline, Transaero has spread its Moscow operations to all three of the mega-city’s airports; Domodedovo, Sheremetyevo and Vnukovo. As Dmitry Stolyarov, Transaero’s Deputy Director General, told anna.aero in 2010, the strategy is to make use of the airports’ slightly different catchment areas. Although the airline’s hub, Moscow Domodedovo, still accounts for 87% of the airline’s Moscow operations, Transaero currently operates eight scheduled leisure routes out of Moscow Sheremetyevo. Most of these destinations are served by Transaero from Domodedovo as well.

Transaero’s most recently added base airport is Vnukovo, from where the airline now operates nine routes, three of which are domestic. All but two of these routes are also served from Domodedovo; the exceptions being the recently launched flights to Rome Fiumicino and Milan Malpensa.

Transaero currently operates a varied fleet of mostly Boeing aircraft, as well as three Tu-214s. The Boeing fleet consists of 23 737 Classic aircraft, 15 737NGs, 14 767s, 13 777s, and 22 747s. The airline is due to continue receiving used 747s and there are further seven Tu-214s next to Transaero’s name in Tupolev’s order books. Transaero will further widen its fleet composition as it has orders for small numbers of new generation aircraft with both Boeing and Airbus – the latter manufacturer being a first for the airline. Transaero has ordered four 787s, four A380s and eight A320neo aircraft.