Here's a sobering thought: OAG shows Turkish Airlines serving 183 destinations from its Istanbul Ataturk hub in August, making it the most connected single base of any airline in Europe! THY has added 20 new routes in the past year including Novosibirsk in Siberia in March - its eighth Russian destination from Istanbul.

The latest government statistics show that Turkey’s airports handled over 57 million passengers in the first half of 2012, representing growth of 10.4% on the same period in 2011. Maybe, surprisingly, the country’s fastest-growing airport is also the biggest airport, Istanbul Atatürk, which saw passenger numbers soar by 22% as Turkish Airlines continues to unleash new routes at an impressive rate. The two airports serving Istanbul handled a total of 27.35 million passengers between January and June representing a full 48% of all Turkish airport activity. 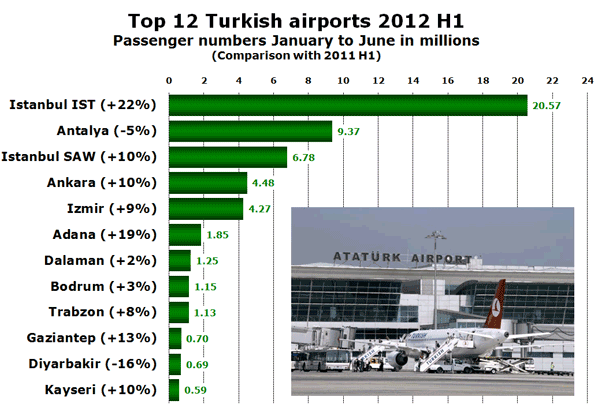 Since June 2011, Turkish Airlines has started over 20 new routes from Istanbul Atatürk to various destinations, as summarised in the following table:

Before the end of the year Turkish Airlines has announced plans to start services from Istanbul Atatürk to Kinshasa (27 August), Sebha (2 September), Sharm El-Sheikh (9 October), Kharkiv (28 October) and Malé (24 November), with Houston services slated to start in 2013. In addition, the airline has also launched a number of new services in 2012 from Ankara and Istanbul Sabiha Gökçen.

According to OAG schedule data for the beginning of August, Turkish Airlines will be serving 183 destinations non-stop from its Istanbul Ataturk base, making it the most connected single base of any airline in Europe.

Other route launches in the Turkish market

New routes launched by other carriers at Turkish airports in 2012, or planned to start before the end of the year include the following: