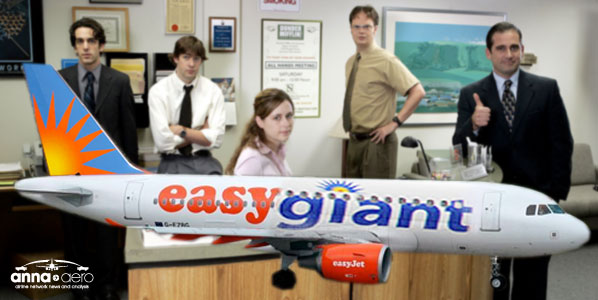 Thumbs up for Scranton-Vegas? With a range of more than twice its 20-year-old MD-80s, Allegiant says acquiring the 19 ex-easyJet and Cebu Pacific A319s “opens many new route opportunities.” (In case you were wondering, good ‘old’ Allegiant remains most unlike easyJet in all other ways.)

Allegiant Air’s recent announcement that it would start acquiring 156-seat A319s from Cebu Pacific and easyJet to facilitate growth in the coming years came as something of a surprise as the airline traditionally likes using 20-year-old MD-80s adding, just recently, also-old 757s (for its new Hawaii routes). The airline estimates that while ownership costs for the Airbus will be higher, maintenance and especially fuel costs will be significantly lower, resulting in an estimated cost per passenger of $96 compared with $106 for an MD-80, based on a 90% seat load factor, current fuel prices and aircraft utilization of 8.9 hours per day. With a range of more than twice that of an MD-80 the A319 “opens many new route opportunities”. 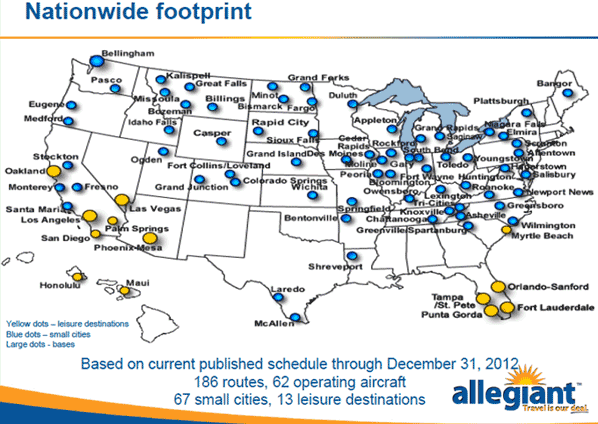 A footprint that could get much bigger with the addition of 19 156-seat A319s between 2013 and 2015? Out of Allegiant's 186 routes just 15 face head-to-head competition. The newest 'dots' on the map are Scranton (Pennsylvania), Honolulu (Hawaii), Maui (Hawaii) and Ogden (Utah). (Source: Allegiant Air management presentation, 6 August 2012)

Allegiant’s focus on the leisure market, taking people from smaller, underserved communities to destinations they want to go to, when they want to go there, results in the airline having a distinctive seasonality profile with demand peaks in March, July and December. 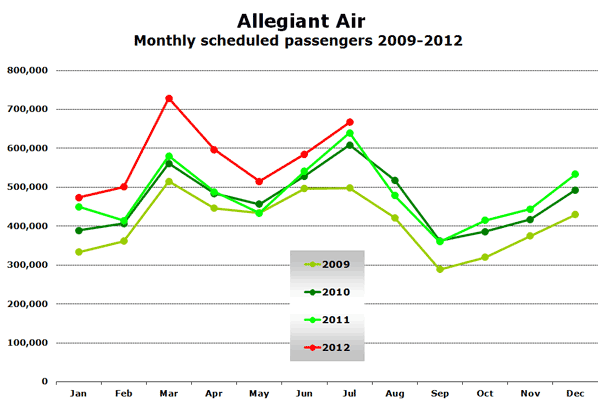 After reporting scheduled passenger growth of just 3% in 2011 to 5.78 million, in the first seven months of this year passenger growth has grown strongly once more by 15%. With extra seats being fitted on half of the airline’s MD-80s and the launch of services to Hawaii (from 29 June) using 223-seat 757s the airline is expecting ASK (Available Seat Kilometre) growth to rise to around 25% in the fourth quarter of 2012, with ASK growth in 2013 currently forecast to be in the range of 20-25%.

Only scheduled carrier at five US airports.

Out of the 80 airports currently on Allegiant’s route network, it is the only scheduled carrier at five airports according to OAG data for August; Fort Collins/Loveland (Colorado), Chicago-Gary (Indiana), Punta Gorda (Florida), Stockton (California), and Youngstown (Ohio).