Malaysia Airlines’ CEO, Ahmad Jauhari Yahya, welcomed the British PM, David Cameron, on board the airline’s second A380 for a special visit at the 2012 Farnborough International Airshow. In mid-August, Malaysia Airlines will introduce the new A380 on the route from Kuala Lumpur to London Heathrow, which it first served in 1974.

Boeing remains in the lead of the 2012 delivery race, although Airbus managed to further decrease the gap as it delivered more aircraft than the US air framer for the second consecutive month. Notably, both manufacturers improved the number of delivered aircraft for both narrow and widebodies compared with July 2011. While Boeing increased the number of aircraft delivered by three in both categories, its European counterpart provided two more single-aisle and five more widebody aircraft than in July last year. 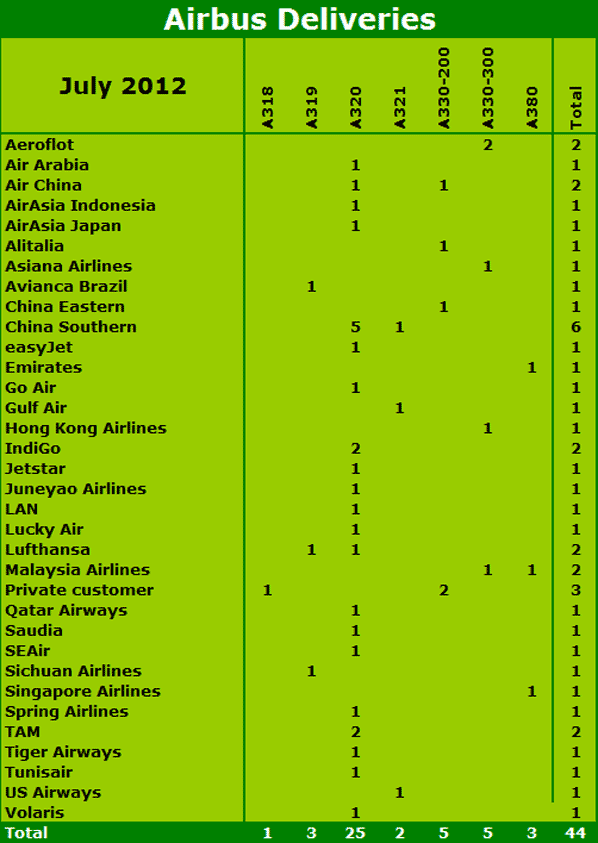 Airbus closed the month with a total of 47 delivered units, which is four aircraft less than in June 2012, but seven units more than in July last year.

Once again, deliveries in July were led by the A320 family, with a total of 34 of these single-aisle jets provided to airlines worldwide. This included five A320s and one A321 for China Southern, which became the largest aircraft recipient in July 2012, replacing another Chinese carrier, China Eastern. Except for India’s IndiGo and Brazil’s TAM, which received two A320s each, no other carrier took delivery of more than one single-aisle unit last month. This year to date, Airbus delivered 253 single-aisle airframes, 12 more than its American rival.

Among the 13 widebody deliveries in July were three A380s. Notably, one each strengthened the inventories of Emirates and Singapore Airlines, bringing their respective fleets to 22 and 18. The European manufacturer is now only one unit away from fulfilling the Singaporean airline’s A380 order. Additionally, Malaysia Airlines received its second A380 last month, out of a total order of six units, which it showcased during the 2012 Farnborough International Airshow. Customers in Europe and Asia received five each A330-200s and A330-300s. Russia’s Aeroflot was the largest recipient of widebody aircraft from Airbus, as it took the delivery of two A330-300s. 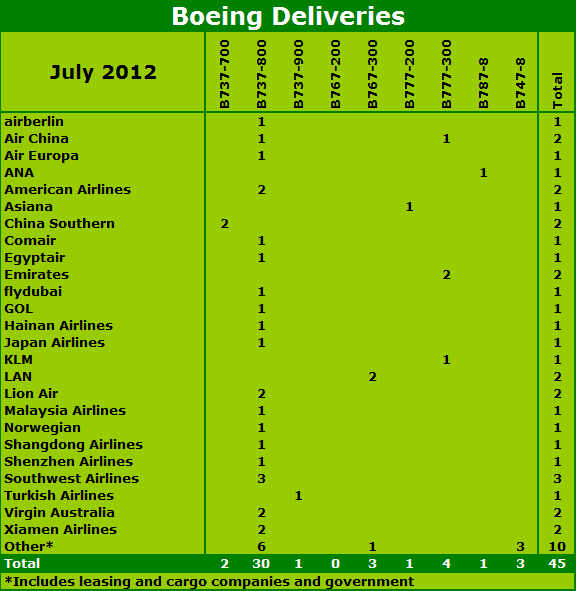 Boeing closed July with a total of 45 aircraft delivered, five units less than in June, but seven more than in July 2011.

Airlines received a total of 33 narrowbodies from the American air framer, two less than in the preceding month. Notably, the single biggest recipient of single-aisle aircraft for the third consecutive month was Southwest Airlines, which took delivery of three 737-800s, bringing this year’s total received by the airline to 15 units. Four further carriers received more than one narrowbody from the American manufacturer, including two US airlines; American Airlines and Virgin America.

Three less widebody units were delivered in July than in June, although the American air framer improved its year on year performance by exactly the same number. Having received three 787s in June, ANA took delivery of one more unit of the type in July, bringing the total operated by the airline to 11. For a second month in a row, Emirates was the only other airline to receive more than one widebody airframe last month, taking two 777-300s. While the carrier now has a 43-strong fleet of 777-300s, further 77 units are yet to be delivered, leaving Boeing with far bit of work in the coming years.