Nice on target for 11 million passengers in 2012 helped by easyJet base; over 25 new services launched this year March 2012: Nice becomes an easyJet base, adding seven new routes, bringing the total to 23. The airline has served Nice from other bases since 1996, dropping only three routes in this time, justifying the claim made in the logo on the Nice-based planes: “France in the Heart.”

Since anna.aero last examined Nice Côte D’Azur Airport back in May 2009, passenger numbers at France’s busiest airport outside of Paris have remained relatively stable, falling slightly in 2009 and 2010, but bouncing back in 2011 to the same level as in 2008. Nice was one of the first major mainland European airports to really benefit from the development of low-cost flights from the UK in the late 90s. 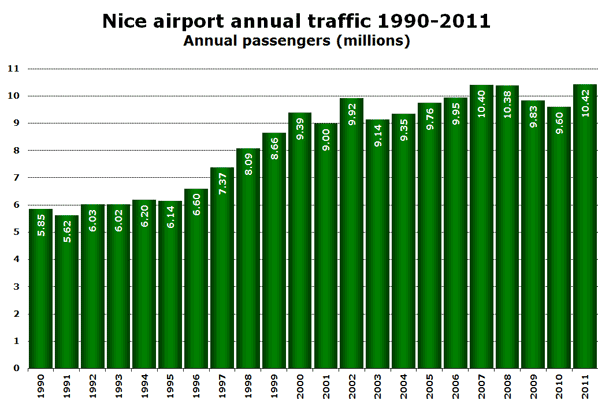 This year has started well with demand up 6.2% to 5.1 million in the first six months of 2012, suggesting that this could be the year that the airport breaks through the 11 million annual passenger mark. Traffic was up 7.9% in June and Sunday 24 June saw a record 46,219 passengers pass through the airport, helped by two major local events, Cannes Lions (the international festival of creativity from 17-23 June) and the Nice Iron Man event (24 June). 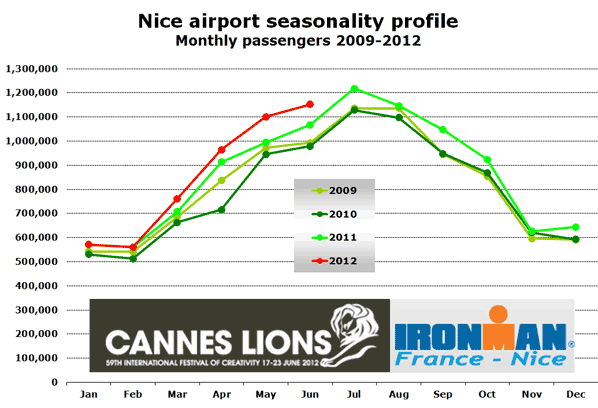 easyJet designated base since March

Since the start of the summer season, Nice has been a designated base for easyJet, which first started serving the airport in June 1996 from London Luton. The base has enabled the introduction of seven new routes (to Barcelona, Bordeaux, Lille, Nantes, Naples, Toulouse and Venice) bringing to 23 the number of destinations served by easyJet this summer. (Note: easyJet has only so far dropped three routes from Nice; Amsterdam, Dortmund and East Midlands.) As a result, easyJet’s traffic is up 13.4% to over 1.23 million passengers in the first half of this year. Only Air France with 1.41 million carried more passengers through the airport, and between them, the two carriers account for over 50% of the airport’s traffic.

Over 25 new services introduced since beginning of February

Since the beginning of the year, Nice has welcomed almost 30 new services offered by 15 different airlines, many of them existing users of the airport, but also some newcomers such as Monarch and SkyWork. Around one third of the new services are to destinations not served by any other carriers including to the capitals of Germany (Berlin), Greece (Athens) and Switzerland (Bern).

Services that have been dropped since last year include bmibaby to East Midlands, Cimber Sterling to Billund and Copenhagen, City Airline to Gothenburg, Meridianafly to Olbia, Norwegian to Oslo Rygge, Spanair to Barcelona, Swiss to Basel, and Vueling to Toulouse. In half of these cases, the route was terminated because the airline has ceased operating, or in the case of bmibaby, soon will.

In the first half of 2012, a total of 12 routes generated at least 100,000 passengers, with over one million passengers using the Paris CDG route. Among these 12 routes, seven reported year-on-year traffic growth while five routes revealed demand declines of between 1.5% and 6.2%. The top three international routes all saw impressive growth thanks to additional capacity and increased competition. 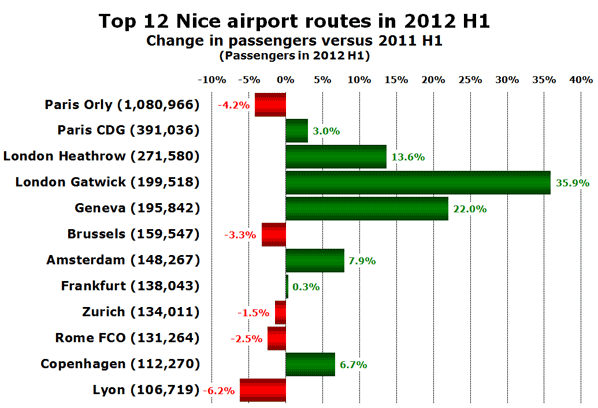 Swiss joined easyJet in serving the Geneva market, while British Airways (BA) went toe-to-toe with easyJet from London Gatwick. The London Heathrow market has surged as a result of bmi launching new daily flights last August which have since been absorbed by BA after the acquisition of bmi earlier this year.