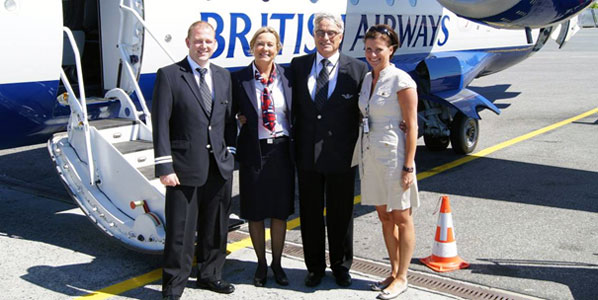 British Airways’ franchisee Sun-Air is among the airlines to have made Denmark the biggest international market from Norway with its new Bergen-Billund route in June, but the country pair market is dominated by SAS on the Oslo-Copenhagen route. The Scandinavian flag carrier’s main competitor Norwegian is, however, the overall biggest international carrier out of Norway.

Norway’s air travel market has shown impressive resilience in recent years despite the on-going economic difficulties across most of Europe. Although passenger numbers at the country’s airports fell by 3.2% in 2009, they grew once more by 8.3% in 2010 and by 9.6% in 2011, well above the European average. As a result Norway’s airports handled a grand total of over 48 million passenger movements last year, a considerable achievement for a country with a population of less than five million people. 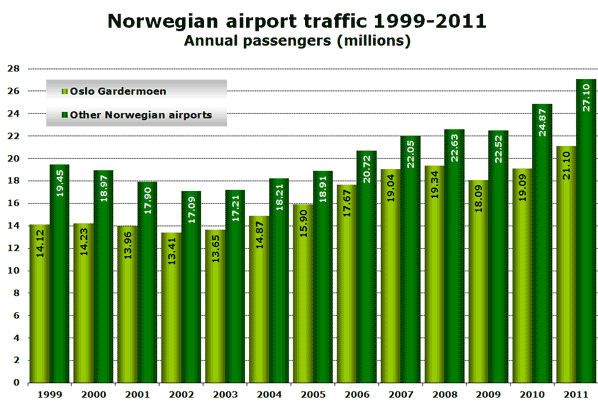 So far in 2012 (January to June), Norway’s airport have seen passenger numbers rise by 5.9% to almost 24.5 million, suggesting that by the end of the year more than 50 million passengers will have passed through the country’s airports. Oslo’s main airport at Gardermoen continues to account for around 44% of the country’s total passenger movements, handling 21.1 million passengers last year (+10.5%). Seven other airports handled over one million passengers last year; Bergen (5.6 million), Stavanger (4.1 million), Trondheim (3.9 million), Tromsø and Bodø (both 1.8 million), Moss Rygge (1.7 million) and Sandefjord Torp (1.4 million). The last two serve as secondary / low-cost airports for the Oslo region.

Analysing capacity data for this summer (and comparing it with the summer of 2009) reveals that Denmark has re-claimed its position as the leading international country market from Norway, after the UK had briefly taken over the top spot. Compared with July 2009, international seat capacity from Norwegian airports is up 42%, with Spain, Poland and Greece all seeing a more than doubling of seat capacity. Spain has overtaken the Netherlands and Germany to be the third best served country market in July. 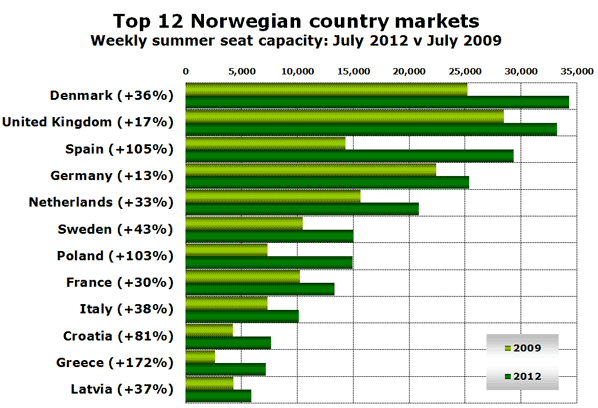 Again comparing July 2012 with July 2009 shows that both Norwegian and SAS have significantly increased their international capacity, Norwegian by 47% and SAS by 41%. Between them, the two carriers account for around 55% of international seat capacity. 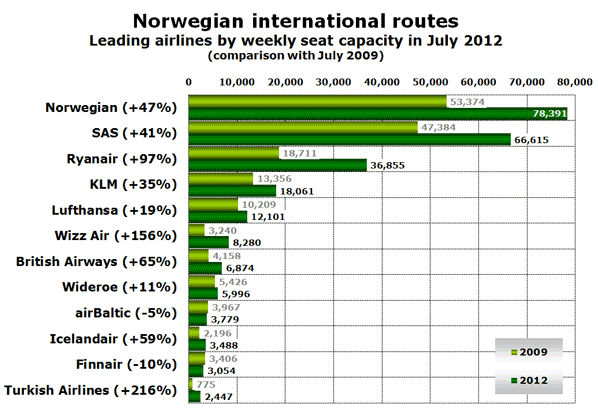 Two of the fastest-growing carriers among the top 12 are LCCs Ryanair and Wizz Air. Ryanair has doubled its summer seat capacity in three years thanks to the development of its Oslo Rygge base since it was opened in March 2010. Wizz Air now operates 15 routes from Norwegian airports, 11 to Poland, three to Lithuania and one to Latvia. It is worth noting that Europe’s second biggest LCC easyJet does not operate any flights to Norway. Turkish Airlines, ranked 12th in terms of seat capacity, has seen its Istanbul – Oslo service grow from just five weekly flights in July 2009 to the current level of 14 weekly flights.